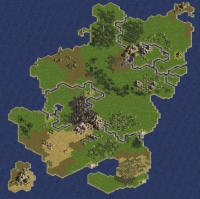 Are things happening so fast you don't know where you are anymore? Are you looking for a more relaxed pace of life? Is the stress of it all finally getting to you? Looking for a truly lightweight version of BattleMaster? Looking for a place to deport hated enemies? If the answer is yes to any of these things, then the Colonies is the place for you!

The Colonies are still young and there is very little infrastructure outside of the main cities. There are few roads around for travel, and fewer still are of the continental standard you would expect, making travel slow (there is only one turn a day in the Colonies.) But don't let the bumpy caravan rides fool you! The conflicts here are just as fast and furious as any other. The food is plentiful, as is the gold. The sooner you visit the Colonies, the sooner you'll learn of the true joys in life!

Much has happened in the Colonies since the first settlers arrived from other lands. Many wars have raged across the land for dominion over this island of few regions. Several realms are now nothing more than pages in the history books.

In May 2012 it was announced that land borders on the Colonies would be reshaped in order to adhere more firmly to the conventions of region placement on other islands. New travel options would be implemented, several regions reshaped and many new regions created in service of this goal. Proposed changes went under several iterations and were discussed and refined on the forum before eventually being implemented on 22 August 2012. New regions created as a result of the Land Reform are:

Defenders of the Trinity Religion

Order of Believers in the Code of the Word.

A loosely associated bunch of people devoted to gaining wealth.

A guild of artists and performers, based in Dark Citadel.

A place for great minds to gather.

For those who love stalking the wilderness in search of their next great trophy.