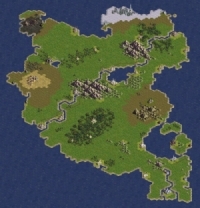 No document encompassing the entire history of Atamara exists, though many a realm maintains the history of their own struggles upon Atamara. Newspapers provide good reference points too, particularly if Atamaran history from about 1006 is your interest. Below you will find a cache of notable documents that may help you begin to piece together the long and fascinating history of Atamara.

This guild seeks to promote a movement of patriotism, as well authoring a free newsletter.

This guild seeks to establish and develop various national styles of swordfighting.

A tribute to Mathew Hetland.

The Atamara Adventurer's Guild is a place where the nobles of Atamara can interact with those commoners who provide vital services.

The purpose of the guild is to gather writings – poems, song lyrics, stories, jokes etc. – from the nobles of Atamara.

A guild for people who have darkness in their hearts.

A Darkan military service for hire.

A guild founded in Eston that focuses on gathering and analyzing intelligence, both domestic and foreign.

A guild to preserve the memory of Falasan and to serve as a gathering point for those who wish to drink to their old days.

A guild created to fight against the monsters and undead that plague humanity and civilization.

The goal of this Guild is to spread Da Way, the message of Da Great Goat, to the world.

More an academy than a guild, the Order is a place for those who seek to teach, or learn, about all aspects of life as a troop leader.

A now defunct guild for players of the famous card game Skat.

Please make this the first one you add.

The biggest hazard in Atamara are the abundant Badgers. Those who fear them and rant about them should be done a favor and be sent to the nearest hospital.