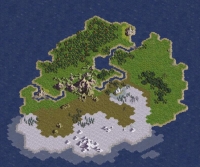 You seek blood, the shining of blade, the glory of war? You had better. Since time immemorial, the regions of the South-East Island have been locked in constant warfare, never to back down until only one banner flies over the three cities. Diplomacy and work exist not here, if you should seek them seek another isle for this is not your place. If you hunger for battle and glory, welcome.

Realms of the current South-East Island

The South-East has always existed in war. Three great realms: Ikalak, Sandalak and Taselak, have fought for supremacy over all regions since they were founded. Sometimes it will seem that one realm is victorious, but a new generation of enemies will inevitably return, ensuring that no one of the three will ever control the island forever.

There is no quarter for aid here: it is all about combat. No police work, no civil work, no system other than the blade. It is how it has been, and how it must continue if the realms desire to survive.

These were lost once the island sunk. 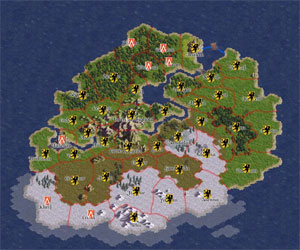 After many years of struggle, by June 1, 2006, Tom declared the South-East Island won in the name of Sandalak. The final tally was as follows:

The South-East Island has been reset, with a new realm based in the Toren Stronghold as a change from the original.