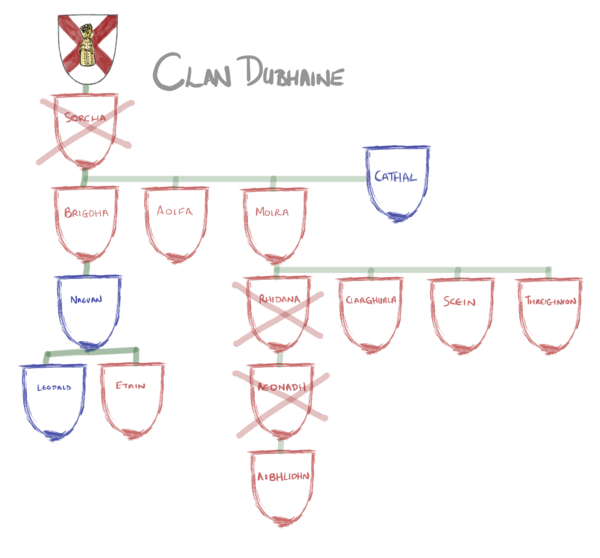 Meanwhile Lady Moira established herself in Fontan where a turbulent career saw her achieve high office as Supreme Justice and Marchioness of Negev. When Fontan fell into Civil War she was joined by Brigdha. In May of 1009 Moira relocated the family seat to her estates but later that year a series of obscure disasters overtook the Clan and they were believed extinguished.

However in December 1010 it was discovered that what remained of the family estates had been relocated to Ashforth and that Lady Moira's daughter Dame Rhidhana had been raised there under the protection of those loyal to her mother's memory. Brigdha also returned from retirement at this time and would go on to be one of East Continent's most influential noblewomen as a priestess, a diplomat, and according to rumours a powerful sorceress.

Of the daughters of Moira four would go on to serve as Generals. Rhidhana won enduring fame as Fontan's last Minister of Defence, brokering peace with Sirion and fighting two successful wars against Westmoor before falling in battle during the last siege of Krimml. She was succeeded by her daughter Aednadh who went on to serve as General of Sirion in which office she was killed in a duel just prior to the civil war known as the Secession of the Southern Duchies.

Ciarghuala was born on Dwilight where she earned her spurs in service of Niselur and when that realm was destroyed she relocated to Luria Nova where she founded the Grand Pantry and eventually became Queen. Her younger sister Aibhlidhn moved to Beluaterra to fight the Daimons, becoming first General and then Queen of Ar Agyr.

The twins Scein and Threiginion were born in strange circumstances. Scein sought exile on the South Island where as a prominent noble of Taselak she leads a generations-long crusade against the dreaded Beppo whilst Threiginion leads a life of adventure inspired by her mother.