Properly translated from the original Fontanese dialect, the name Etain means "passion", "jealousy". Should Etain ever attain the noble rank her talent deserves, her full name will mean "the passionate woman of dark countenance".

Etain is the only daughter of Naevan, the son of Lady Brigdha Dubhaine and Bedhwyr, and Erfrayj a minor elven noblewoman somehow related to the sprawling Serpentis clan. The Dubhaines trace inheritance matrilineally placing Etain outside the line of inheritance and she was raised at her grandmother's court in Negev, recognised as family and much loved but with her life mapped out for her. She would hold a commission in her grandmother's Toxophilites and serve some knight loyally, marry respectably amongst the lesser nobility, have a daughter or two, then in the fullness of time be knighted or take the cowl.

This was in the days when Negev was the centre of the Flow of the Balance with a renowned monastic school dedicated to the arts, the sciences, the mysteries and arms. Young Etain excelled in her studies with ease yet for all the training and discipline, the long hours of meditation and reflection, her blood raged against the future set for her. Her parents might be content to live the courtly life but she hungered for adventure. So it was that not long after attaining her majority she resigned her rank and set forth into the wilds to prove her worth not only to her grandmother and the Lords of Shadowdale but more importantly to herself.

If Etain's parents are night and day, then she is the glorious dawn. The gold threads of elfland weave through the dark forest of Dubhaine tresses, the prominent features of her grand-dames tempered by ancient summers when the world was young and war a future memory. Golden irises swirl into pits of deepest black, at one moment filled with ancient knowledge, at the next burning with the passions of the flesh. The same lithe, willowy frame is there, but it moves more subtly, the primal power of the predatory great cat sheathed in a harlequin's humorous grace.

Etain's wargear is that of a Toxophilite minus its insignia. The long concave stave of Sirion rosewood strung with spider silk, the black bodkins, the slender stabbing sword and hooked hunting knife, the lantern target shield, the night-black brigandine doublet, the russet coat and hood. 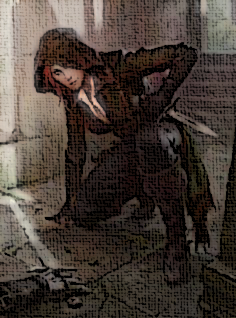 Whilst Etain lives the life of a common adventurer she's well read - probably more so than most nobles - and pursues a deeper practical understanding of the mysteries. Many rumours are told of the powerful sorceries Lady Brigdha commands and Etain is inspired to seek out such knowledge even at the risk of her life.

Her ancestry has given her a double-dose of passion for life and liberty. Freed from the strictures of her contemplative upbringing she finds pleasure in her vices, though rarely with the malice of the Serpentis nor the seriousness of the Dubhaines.