As with all the line of Moira she has the powerful, sinewy frame of a seasoned warrior. The midnight-jet of Aibhlidhn's hair grows thick and long, framing a strong face with high cheekbones and a commanding demeanour. Her amber eyes rival the piercing stare of a hawk or eagle when she's angered though at other times they sparkle with a good-natured humour.

Aibhlidhn's wargear is modest for a reigning Queen, modelled after that of her Royal Fusileers. A plain kettle helmet adorned with a simple coronet distinguishes her rank whilst her body is protected by a steel corselet over a scarlet arming jacket made of quilted silk with a reinforced leather core. A steel gorget protects her throat and matching bracers guard her forearms.

An archer's sword hangs from her girdle, light but deadly with two razor sharp edges and a curved guard for blocking attacks, and a poignard runs horizontal across her back for use at closer quarters or as a parrying blade. However her main weapon is the Agyrian Fusil, a recurve bow fashioned from a single length of flintwood (hence the name fusil) run through an adjustable grip, paired with a quiver of matching bodkins. Flintwood is found mostly in the forests of northern Agyr, a black hardwood, light as ashwood but rigid with a translucent sheen which when properly worked by a master craftsman is strong and flexible like steel.

At court Queen Aibhlidhn favours linens and light gowns of bright brocade or dazzling silks whilst for State Occasions she wears the magnificent Royal Diadem of Ar Agyr and bearskin robes of Kingly Office over the scarlet dress tunic and hose of her Royal Fusileers. 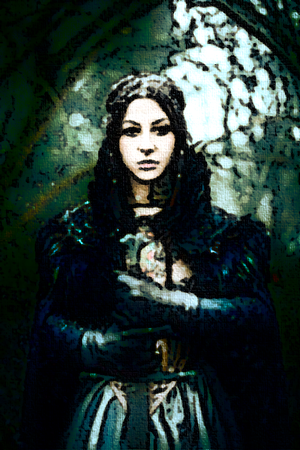 Aibhlidhn stands highest in martial virtue of all the House of Dubhaine, a cavalier since her youth who has never turned from honourable battle and risked her life more than once in duels with other nobles. Although by nature a peacemaker Aibhlidhn is a cunning and implacable foe when war is unavoidable and her force of will is such that the small professional army of Ar Agyr has earned glory throughout Beluaterra far beyond its size.

Beluaterra has been plagued by Daimon Invasions for generations and Aibhlidhn is fully committed to defeating the Lords of the Nether once and for all. To this purpose she will intervene wherever she detects infernal interference whatever its nature and she enjoys a close relationship with her great grandmother Moira who is a shadowy influence at her court.

Strangely for a woman so driven by a higher calling, Aibhlidhn's manner is often light-hearted and during rare hard-won periods of peace she's a patron of the arts, of literature, and of scientific learning. Scholars and explorers of all sorts are welcome at her court and she's widely read in her own right, able to discuss the finer points of alchemy, theology and natural philosophy.

May, Against The Rainbow Alliance