Aednadh is the daughter of Lady Rhidhana Dubhaine, last Minister of Defence of Fontan. As with all the line of Moira she has a powerful, sinewy frame but her softer features combine with her honey-blonde hair and vivid green eyes to give her an otherworldly beauty. Some have speculated that her father may not have been human, though the famed reticence of the Dubhaine family in such matters casts little light on the truth.

Fostered amidst the cultivated court of Margravine Brigdha the young Aednadh is no stranger to the arts or sciences, though her passion for the hunt has given her ample exposure to more practical pursuits befitting her noble status. Few doubt that in time her sword arm will become as feared as that of her Dames, or that her pen will be equally as deadly if she chooses a political career. 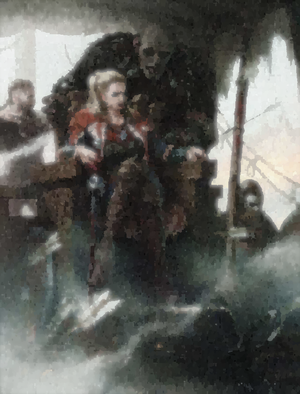 There is a dominant streak in the Dubhaine blood which Aednadh inherits, combined with a love of adventure. However the recent death of her mother has affected her deeply and she is uncertain what the future holds.

1013
Countess of Greatbridge
General of Sirion

Iraen
Once Lady Moira's squire, Iraen is now chatelaine of the household and a link to Aednadh's mother
Yfain
A giant of a man with an oft-times murky past, Yfain is a reaver's reaver: happiest when the ale flows freely and there's mischief to be done. Following the disappearance of Lady Moira he became first Rhidhana's self-appointed bodyguard and now Aednadh's. Age somehow hasn't dimmed his lust for life nor appreciably weakened his physique, though his wild hair and beard are now entirely grey
Neris
The widow of Moira's personal physician Helion, Neris has an extensive knowledge of herb lore and custodian of an extensive collection of medical treatises published in Fontan and the north
Rollo "The Young"
A gregarious man in middle-age, he boasts a deep scar across his forehead from his youth as a freebooter. Rollo is supposedly the family's chief reeve, but more often than not he's to be found in company with Yfain or keeping an eye on Aednadh when she travels abroad
Leopald
Grandson of Carl Heinman and captain of Aednadh's bodyguard, The Ghost Watch

1013
Perdan's Pride -- King Atanamir of Perdan stirs trouble amongst the Haradrim of Nivemus, threatening war
March -- Aednadh torches the Church of Humanity temple and shrines in Bruck, exacting her vengeance for the murder of her mother by King Jor's followers. For this breach of military discipline she is reprimanded and fined 150 gold crowns, though rumours circulate that Judge Ecthelion himself paid the fine out of sympathy for the young knight's heartfelt anguish

1014
The Fall of Westmoor -- As the armies of the Northern Alliance break Westmoor City, Aednadh makes her peace with King Thomas

1015
Sirion's Petty Civil War -- Following the secessions of Oligarch and Slimbar, Aednadh finds herself defending the noble dignity of the traitor Celine. She is slain in a duel to the death against Cymak Fireborn