The eldest son of the Dubaines, as a young knight he followed the example of his three elder sisters and set out to make his name in the wider world. A dark-haired, slight lad of modest height and boundless youthful energy, Cathal was always at his happiest out in the wilds hunting boar and stag. However after being interred in the pits of Oritolon he found a higher calling, first as a paladin of the Church of the Trinity and later as founding Prophet of the reformed Church Militant of the Trinity.

Following the conquest of Alowca by Oritolon Cathal headed to the aid of the Assassins and attempted to transplant the new faith to the north, however circumstances made this impossible. During his exile he wrote a number of plays including the epic tragedy The Fall of Alowca and performed to audiences throughout the Bakker woods and beyond before ultimately being called to the Heavenly Host.

Later returned to flesh, Cathal was once more called to prominence by Lady Denariel to lead the peaceful people of Minas Thalion until their destruction by Outer Tilog. He then lead Empress Valkyrie's forces to victory in their war against Oritolon to establish the Colonial Empire and became a founding member of the Senate.

He subsequently ruled as Lord Elect of a reborn Minas Thalion until it was destroyed once again by an alliance of Outer Tilog and her neighbours. 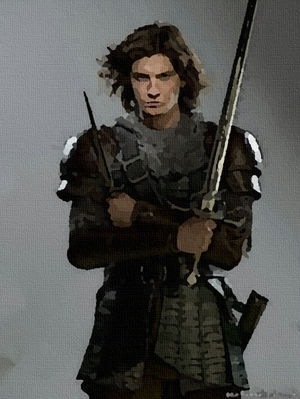 Cathal possesses the keen intellect which is the trademark of the Dubhaine Family, but until his conversion to the Church of the Trinity he was set on a life of dissolute adventure. At first the faith intrigued him but he did not take it very seriously, however during his incarceration in Oritolon he developed a deep and abiding vocation. He left prison fearless, compassionate and filled with an abiding love for those who suffer under the yoke of evil.

War has not been kind to his body, but the wounds which have shriven him have given him depth usually lacking in a noble of such youth and focused his mind on the service he must give unto others. This drive lies at the core of his belief that the Church Militant of the Trinity is a vital element in the spiritual and political rebirth of the Colonies, although he is mindful of the fact that it will not be the hands of men which win the war against evil, but those of Khagistar the Creator and his Heavenly Hosts.

1013
Knight of Corali Forest, April
Marshal of the Army of the Black Ravens, June
General of Lukon, July
Margrave of Alebad, December

1014
Imperial Lord of The Electorate of Minas Thalion, March
Duke of Alebad, March

A record of the battles Cathal Dubhaine has participated in.

A record of letters Cathal sent out.

Cathal started his career in Alowca, commanding The Ravens. Being young and full of the lust for adventure he had put little thought into his destination, although subsequent events suggest there may have been other powers at work shaping his future.

1008
January, The Call -- Cathal found a warm reception and was accepted into the service of Duke Absolute Reach. Assigned to the Alowcan United Front his company fought at the battle of Grentzen where he was captured and sent to the prison in Oritolon City. Whilst imprisoned he experienced a series of powerful dreams and become totally committed to the cause of the Church of the Trinity
February, The Call -- The visions continued and the newly released Cathal returned to service with his army. Later in the month he participated in a raid deep into Oritolon territory, finally being cornered in Iglavik where The Ravens were cut down to the last man and he spent a further uneventful spell in the Oritolon dungeons before returning to Alowca to recruit a large number of the faithful to his Companions
March, The Folly of Youth -- Having misunderstood the dreams he had received, Cathal marched to war with a large body of believers and joined in a raid on Windaria where they sacked a shrine of the Path of Chivalry before fighting two brutal battles with an Oritolon relief force: the latter saw his company massacred to the last man. Having shown him the error of his ways the Trinity obscured his body from those who would desecrate it and he received a further vision whilst he was being nursed back to health. Marching the long leagues back to Alowca he had ample time to think, formulating The Faith Militant. On his arrival back in the City he found the Temples of the faith falling into ruin and Duke Xerxes gone into self-imposed exile abroad whilst the corrupted priests of the Church were nowhere to be seen. The only consolation was the appearance of Captain Gregor and the Templari Militans, horsemen of mysterious origins dedicated to his service.
April, Duke, General and Prophet -- Pontifex Sacred appointed Cathal to the now-vacant Duchy of Alowca, then following the capture in battle of General Gravitas he was elected to that post. After commanding a desperate campaign in Abaka from which their Alebadian allies fled, Cathal returned to Alowca to found the Church Militant of the Trinity.

1009
March, The Call to Arms -- Even as Alowca falls into anarchy, Duke Cathal is called North to aid the Guild of Assassins in their war with Giblot.
May, The Temple of Man -- With the final destruction of the Temple in Alowca the public influence of the Church Militant dissipates. A visitation from the Goddess Denariel explains this sudden collapse of the organised faith and Cathal is commanded to choose the a new path through which the faith can be taught, leading him to join the Shadowists.

1010
December, The Flesh Incorruptible -- Cathal returns once more to serve Denariel's will.

1011
February, The Champion's Walk -- A tournament is being hosted in Alowca allowing Cathal to once more visit his beloved city. Slipping from the tournament grounds late at night he is lead to the Champion's Walk by the Lady Denariel and his covenant with Khagister confirmed.
August, Friendships Old and New -- Freshly appointed Imperial Lord of Minas Thalion, Cathal plays host to his old friend Count Aepyornis of Helsera and Gellin, an Ambassador from Giblot.
September, The Gathering Storm -- Cathal continues his reacquaintance with Count Aepyornis as the drums of war beat louder in the south.
October, War Unleashed -- Oritolon invades Minas Thalion, the start of the final war of Lukonian hegemony.
December, Duty -- The war against Oritolon has gone better than expected and the Duchy of Alowca is under siege.

1012
February, Defiance -- Stung into action by Cathal's renewed attempts to make peace with Oritolon, Lukon declares war and the Horde marches on Alebad.
April, The Fate of Portion -- Having journeyed far to the north to save Minas Thalion, Cathal breaches the curtain to share his prophetic vision with his sister Aoifa and the men of his bodyguard.

1014
January, The Gift of Friendship -- Having defeated the superior armies of Aren in a brief border war, Cathal concludes a federation by gifting them Abaka.

1015
December, To Gift a Champion -- With the entire world thrown into chaos and many respected nobles of the Colonies facing imminent extradition, Cathal hosts a tournament in Alebad.