Properly translated from the original Fontanese dialect, the name Threiginion means "forsaken daughter". Should Threiginion ever claim the noble rank her parentage permits, her full name will mean "the forsaken daughter of the woman of dark countenance".

Threiginion is the youngest of the daughters born to Lady Moira Dubhaine during her sojourn between the Zuma lands and the city of Via, 9 heartbeats the junior of her twin Scein and afflicted by the same wyrd. Where her sister Scein chose to face her curse on the battlefields of South Island as a knight in service to Taselak the more cerebral Threiginion took up the lawbook of her mother to mete justice in the shadows of Dwilight.

Raised in the badlands of the Zuma in western Dwilight the young Threiginion is a fearsome hunter who understands the virtue of strength and the importance of justice.

First slain in hand-to-hand combat by an undead Champion when pursuing the necromancers of Eidulb Outskirts.

As with all the line of Moira she has the powerful, sinewy frame of a seasoned warrior. Threiginion's midnight-jet hair frames a pallid face of unearthly comeliness whilst her ice-blue eyes seem to burn with an inner light. Some have speculated that her father may not have been human, though the famed reticence of the Dubhaine family in such matters casts little light on the truth.

Threiginion's wargear apes that of her mother: a well-balanced shortsword paired with a black-forged stabbing spear, the hook-bladed skinning knife with fighting guard, a recurve bow of horn and ashwood and two dozen ash-shafted bodkins fletched with black cygnet quills. Her armour is a tangle of supple leather straps with metal studs and chain links over a padded silk lining, swathed in a thick mottled wolf-fur cloak. 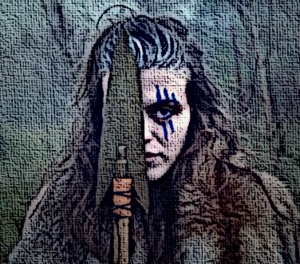 As with all the Dubhaines, Threiginion is well read though with a definite bias towards the philosophy and legal codes of old Fontan as defended by her mother. Whilst her knowledge of the mysteries is less theoretic than that of her aunt Brigdha's line her unusual birth gives her a more native feel for the unearthly.

Resurrected from the dead by the same malevolent entity which keeps her sister Scein bound to the South Island, Threiginion travels south in hopes of finding safety in Luria. However she is attacked in Shomrak and spends several days once more at death's door before recovering.