Rhidhana is the daughter of Lady Moira Dubhaine, former Supreme Justice of Fontan and Marchioness of Negev. She has inherited her mother's powerful, sinewy frame, but her features are softer and her shoulder-length hair gleams like spun gold.

Like all the Dubhaine women she has a deep hunger for knowledge and as a child could usually be found reading one or other of the many scholarly works collected by her mother and aunts during their travels. However Rhidhana is no stranger to the sword or the arts of war, and having entered the service of Duke Elberan to test both in battle against the Elven foes in Sirion she soon found herself elected Minister of Defence.

Subsequently she has worked to maintain Fontan's independence and to establish sovereign claim to her territories through force of arms. 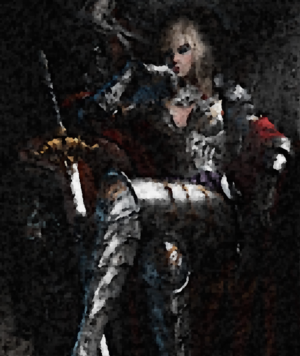 The Dubhaine blood has a tendency to self-expression which Rhidhana fights hard to control, and when her temper's unleashed she's every bit as terrifying as her mother. How this will express itself over time is hard to foretell.

Iraen
Once Lady Moira's squire, Iraen is now chatelaine of the household and until recently was Rhidhana's legal guardian.
Yfain
A giant of a man with an oft-times murky past, Yfain is a reaver's reaver: happiest when the ale flows freely and there's mischief to be done. Following the disappearance of Lady Moira he became Rhidhana's self-appointed bodyguard, teaching her the use of weapons and ensuring that she reached her majority. Age somehow hasn't dimmed his lust for life nor appreciably weakened his physique, though his wild hair and beard are now mostly grey.
Helion
A severe man of perilously advanced years, Helion was Moira's personal physician and is an acknowledged expert on mental disorders such as that caused by the infamous Red Shade toxin. He has written a number of treatises on medicine which are widely regarded in Fontan.
Neris
Helion's wife. A woman in her mid-fifties with an extensive knowledge of herblore.
Rollo "The Young"
A gregarious man in early middle-age, he boasts a deep scar across his forehead from his youth as a freebooter. Rollo is supposedly the family's chief reeve, but more often than not he's to be found in company with Yfain or keeping an eye on Rhidhana when she travels abroad.

1010
December, The Call to Arms -- Young Rhidhana attains her majority and follows in her mother's footsteps as a knight of Fontan.

1011
January, The Battle of Montijo -- Caligus invades Fontan in alliance with Sirion and Rhidhana rides to Montijo as a newly inducted knight of the Manticores where a decisive series of battles are fought. During the conflict she wins fame for her fighting and captures the Elven Prime Minister's Standard.
March-April, The Krimml Campaign -- The Krimml campaign sees a series of brutal battles in and around Fontan's capital as Elven forces seek to hold first Braga, then Commonyr and finally Krimml. Rhidhana leads her dwindling forces in defence of the capital whilst acting as informal ambassador to secure a peace between the warring realms.
May, Peace in Our Time -- Fontan surrenders following intensive negotiations but new conflicts loom on the horizon.
September, Against Westmoor -- Whilst Rhidhana campaigns in Westmoor with a skeleton force, the city of Krimml resists a major assault. In the following weeks her raiding force plunders nearly 1000 gold from Westmoor's southern provinces whilst in the north her troops recapture Commonyr and Oberndorf. A reorganisation of the armies has seen the Manticores and Flow Administrators disbanded, replaced by the Eagle Regiment and the Fontan Homeland Guard, whilst Rhidhana commands the new Fontan Rangers.
October, The More Things Change... -- An unsuccessful rebellion in Westmoor opens the way for a ceasefire whilst peace is discussed and Rhidhana is soon after replaced as Minister of Defence, returning to the less demanding life of a peacetime marshal. Though few seem to realise it her unconventional strategies have saved Fontan from oblivion - at least for the time being.
December 1011 -- Rhidhana addresses the Assembly.

1012
May, The Road To Oporto -- Caligus and Perdan have joined with Westmoor to remake the Southern Alliance, and Rhidhana having resigned her military offices marches to face them as a simple knight.
July, Mourning the passing of a Legendary Hero