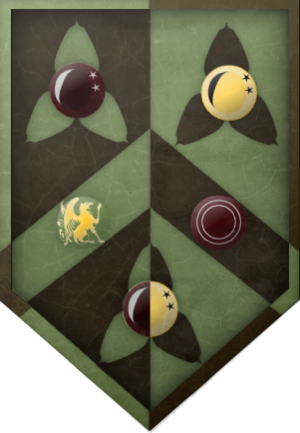 Asylon is a realm of idealism seeking to bring forth the restoration of what was once the strongest territory of Dwilight. Built on the ashes of the great Ancient Echiur Dynasty, a land that has been ravished by monsters and undead alike now welcome the authority and protection of Asylon. Located in the western hill region of the Far West, the city of Via stands as new the capital of Asylon, a beacon of hope to the surrounding regions still terrorized by religious zealots, vile beasts and the unholy dead. Asylon marches forth under the motto of "Yaratma" Create, "Yenileme" Restore, and "Bozulmasını" Preserve we seek to resurrect this once dead land.

The dream of Asylon began in Caerwyn in ages past. Intrepid explorers and nobles of like mind gathered within the republic and planned to one day found a new kingdom in the city of Echiur. Long abandoned and overrun by foul beasts. They headed out into the wilds of Dwilight and made that dream come true.

The kingdom was founded with aid from the Elements. Priest Graeth Geg spent several months spreading the word of Verdis Elementum among the people of Echiur with great success, building one of the largest temples on the continent. When most of the city had converted, the rest of the Asylon expedition was informed to begin their trek from Golden Farrow. Priest Graeth convinced the population that it was in their best interest to return to noble rule and in doing so founded the realm of Asylon and quickly transferred power to Cleon Cullom. The kingdoms first ruler was Emperor Cleon Cullom and he served with honour and cultivated the kingdom in its infancy and insured that it would grow strong.

Then a time came when across the vast land a group of people with a history and culture different than the Asylonians and Caerwynian started moving, fleeing across the vast land of Dwilight as refugees. The Thulsoma were not of the Verdis Elementum faith. They hailed from the eastern continent and worshiped the stars of Sanguis Astroism and for reasons of persecution in their original kingdom they fled as far away from the east lands that they could and hearing of Asylon they made their way there.

They were led by Glaumring Apasurian the Thulsoma founder and once king of the Thulsoman land. He brought with him 6 nobles and there they entered Asylon and were welcomed as equals. Yet, a strange thing occurred and the emperor became withdrawn, he was silent and the kingdom for long stretches was a place without communication. It was then when Lord Glaumring Viscount of Vakreno Heaps seized power in a coupe consisting of Thulsomans and many of the original colonists, when Priest Geg convinced the masses in Echiur to reject the rule of Emperor Cleon. Graeth Geg once again handed over power of the realm to another, King Glauming, who hence reformed the kingdom into a monarchy and changed many of the laws and made the kingdom a monarchy. His rule was controversial and the republic of Caerwyn would not speak nor recognize his rule. The kingdom was at many instances threatened with destruction. For Glaumring and the Thulsomans were Astroists and considered repugnant by the Caerwyn republic. All was dark in this time. Glaumring tried his best to unite the kingdom and forge a new Asylonian nationalism. He served for a time and then stepped down to allow another to lead.

King Moritz Von Igelfield was crowned king on a fine day and he was a renowned and skilled Ambassador for Asylon. He was a gifted negotiator and worked closely with securing many treaties with the Zuma Daimons in the southlands and Caerwyn to the north. He also returned to Caerwyn at one point and secured a vast amount of gold and food for Asylon and returned a hero. He was of the Verdis faith and Caerwyn found favour with him and he served with less of the drama and shadowy pall that Lord Glaumring had held over him. It was under King Moritz that peace was signed with the Daimon Zuma Haktoo. King Moritz also upheld Asylon's tolerance of religion and allowed the foundation of a small temple to Sanguis Astroism in Vakreno Heaps. As King Mortiz served for a time and then when he felt, in the tradition of Asylonian kings he stepped down while still in his health and handed the crown to another.

It was during this time that the northern republic of Caerwyn became more fundamentalist in its belief in Verdis Elementum and began to call out for war with the theocracies of Sanguis Astroism. They declared war on the theocracy of Astrum and war began across the world of Dwilight. Soon Morek and Corsanctum and Libero and Summerdale on the side of the Astroists with Averoth and Madina on the side of Verdis Elementum their long fued instigated by forces on both side threatened to tear the world apart. Asylon like others instead of rushing to aide Caerwyn, chose neutrality to better focus on the strength of their new small kingdom.

Queen Zhoesya Adriddae came to power as an Astroist queen. Once again Asylon would switch between the religions and its balance maintained. During this time the Caerwyn single-handedly wages war against the Astroist Theocracies, while in the south, a civil war between Auravandil and Madina drew the attention of the neighboring realms. Eventually, the Republic of Caerwyn began to fold under the pressure of the combined armies of the Blood Stars. Duchess Sofia MacDuff decided to move the duchy of Via to the Kingdom of Asylon, while others who did not wish to join the Asylonian banner moved south to join Madina. Soon, the influence of Asylon spread north along the coast, eventually bringing the duchy of Itau into the realm after a protracted siege. At this point in time, Glaumring Aspasurain once more wore the Crown, and Asylon entered a time of maintenance as it adjusted to its expanded borders.

After a tumultuous time in diplomatic relations, Glaumring stepped down once again and Lord Grimrog assumed the crown. His reign has been defined by the rapid expansion of Asylon and a solidification of the realm's power in Western Dwilight. Early in his reign the Terran Republic declared war against Astrum. After agreeing to help their allies and join the fray, both realms won some initial success. However, Terran Republic quickly bowed out after the first taste of failure, coupled with their more long-term inability to maintain military cohesion. Due to Astrum's strong political alliance with the other theocracies, Asylon, left to themselves, lost Wallershire and Vyanar to Astrum. With more losses in sight, peace was signed by Asylon ceding rights to those region to Astrum. Soon after Asylon signed an alliance with the militarily powerful realm of Aurvandil to the south, which also sought to upturn theocratic hegemony. When Terran decided to fall on the side of the opposing Sanguis Astroism realms, Asylon used this opportunity to repay their former allies for abandoning them during war. Not long after, the Terran Republic collapsed and Phantaria took its place, but not before Asylon grabbed Inklen and their neighbors, the newly formed Farronite Replublic (formerly Kabrinskia), Faithill and Lavendrow. Phantaria quickly sued for peace, while Aurvandil was swallowed by the south.

Time passed and the Astrum colony of Niselur to the north grew in prominence. A schism in that realm spilled over into the general structure of Sanguis Astroism. Niselur turned to Asylon for help, as they were known enemies of the theocrats. Asylon once again joined in war against the theocracies, and the Farronite Republic, quick to distance themselves from the shadow of Kabrinskia also lent their support. Though militarily disjointed, the two realms of Asylon and Niselur received middling success. Even when suffering defeat in individual battles, the three realms gained an upper hand by dealing long lasting blows to Astrum's infrastructure. Regardless, a change in Farronite's leadership saw them signing a peace treaty with Astrum, strongly reminiscent of Terran's earlier dealings. Asylon and Niselur stayed the course, and Astrum lost more than half of their realm. Due to ongoing drought throughout the continent, Farronite Republic faced their own crisis, which lead to Duchess Kye changing the alliance of most of Farronite to Asylon's banner. With imminent defeat ahead, the theocrats signed peace treaty with Asylon, ceding the regions lost during the previous war as well as Walefishier, Dunnbrook, Granze and Knyazes.

This same drought wreaked havoc on the realm of Phantaria to the south. Their leadership, seeing imminent disaster parceled out their regions to the realms of Asylon and Barca, with Asylon receiving Shoka and Vassar. This finally fulfilled the original charter for the colony of Asylon laid out in Caerwyn many years ago which delineated all regions surrounding the Shokan bay as Asylonian property.

With the defeat of Astrum in the Great war of religious freedom and subsequent annexation of the Duchy of Mech and Farrow, Asylon was set to take its place as a great Dwilight power and had become a beacon among realms. Asylon's men and women had become accustomed to life at the rough-cut margins of civilization and even relished it. But even the most hardened, drunken, boorish Asylonian could not foretell the horrific plague that came next.

It started suddenly and it quickly worsened. Monsters came over the mountains like locusts, out of the woods and in from the sea by the thousands. Vast hordes of vile, hirsute beasts smelling of shlt, vermin, and putrefaction; multiplying, killing peasants as well as each other and feeding on their guts, only stopping to copulate and vomit. They procreated at a faster rate than any other beasts known to Asylon's frontiersman, and the regions and duchies were in very short order overwhelmed by their spawn. The nobles would cede to the monsters. They planned their exodus. The wild west would be wild once again. At least until it becomes desolate. The monsters were too stupid to hunt, so after they eat every last piece of organic matter in their ken, they would likely just shrivel into dust. Whatever their fate, no human being would be around to see it.

Asylon is two seperate cultures Caerwyn and Old Thulsoma (not to be confused with the Saxon Thulsoma that came later) joined together. It is of two seperate religions Verdis Elementum from the republic of Caerwyn and Sanguis Astroism hailing from the eastern continent of Dwilight. The people of Vakreno Heaps are known to chew a strange fruit called Bloodmoon fruit. Asylon is the only kingdom on Dwilight to have made peace with the Zuma Daimons. Asylon allows the foundation and creation of any new religion and allows its nobles to worship whatever they choose, they may build a temple to their faith within their lands. Asylon is a secular state.

Asylon Project - A project for the cultural unity of Asylon 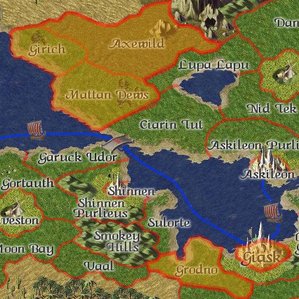 Nobles, not of Note

A Shield of the Bear-Lords... 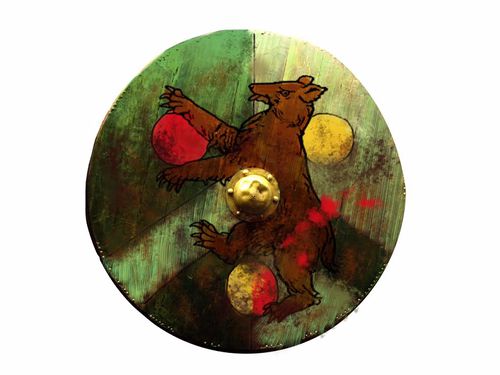