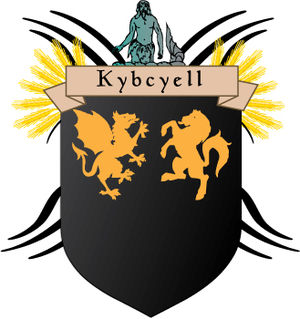 A series of small coastal villages and rural country estates, Kybcyell serves as an agricultural staple of Caerwyn's southwestern regions. A natural harbor makes the region ideal as a stopover for ferries, skiffs and trade ships on their way to Itau and other cities of the western continent, and the area's largest settlement, a small town called simply "West Kybcyell", borders the harbor to the north. The lord's manor resides just outside this town, and near it in a smaller fishing village is the old West Inn, famous for its fish sauce and brandy.

The villagers themselves are hardy folk with little love for outsiders; they are fiercely independent and value strong work ethics and close family ties, but do not disdain craftsmanship or artistry. They do, however, come off as a very practical people and even much of their art reflects this: murals might cover the outside of a fishing skiff, with the paint doubling as a sealant, for example. One thing the men and women of Kybcyell are intensely proud of, however, that serves very little practical purpose is a herd of wild horse that roams along the coast. The horses, largely untamed, range in all different colors and types; the most admired, and most sought, of these horses is a large, sleek, black-coated destrier. The stallion, rumored to have once been the warhorse of a wayward knight, has never been caught, despite many attempts.

There is no organized Town Watch or Region Guard, though within individual villages and towns there are militias, and every villager is expected to fight if needed. Common weapons and tactics, as a result, largely depend on the billhooks and pitchforks of the farmer - pole-arms and what other tools available close at hand.

When monsters invaded the west hills in early 2014, Kybcyellians fought valiantly until the bitter end. On 14 March the monsters overwhelmed the region and mighty Kybcyell was no more.