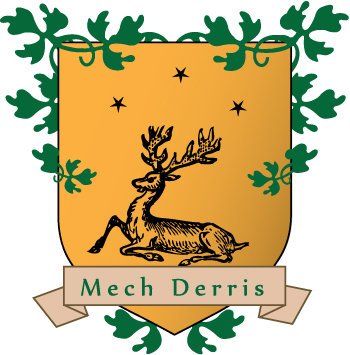 Mech Derris is a region of heavily forested hills lying at the heart of the Caerwyn Republic. Mech Derris is one of the most central regions and as such sees a lot of people traveling through. The river Derris and its tributaries flow through it, eastwards to the sea. The major towns and villages lie along the riverbanks, which serve as the arteries of trade carrying barges laden with goods down to the sea. The principal Market of course is the great city of Golden Farrow. The road network is also well developed. However, road travel is still slow due to the hills and frequently washed out roads.

The people of Mech Derris are a hardy lot, who's loyalty is unwavering, even during times of intense monster and un-dead attack. Nearly all serve the timber trade, although recently, under the guidance and endeavour of new Viscount Ddiethir Setantii food production has risen a lot. There are n increasing number of farmers, and others include hunters or trappers. There are even some miners.

The Forests of Mech Derris are principally oak and pine, they are misty and steeped in local folklore. They provide lumber, charcoal, and pine tar products. The farms herd mainly goats, cows and sheep in the scrublands and plant citrus fruits, olives, and other vegetables. There is also food from hunting and fishing, so Mech Derris is self sufficient in food and even produces a small surplus. The Mines produce mainly lead, zinc, and nickel, and a little silver, With some prospecting for gold.