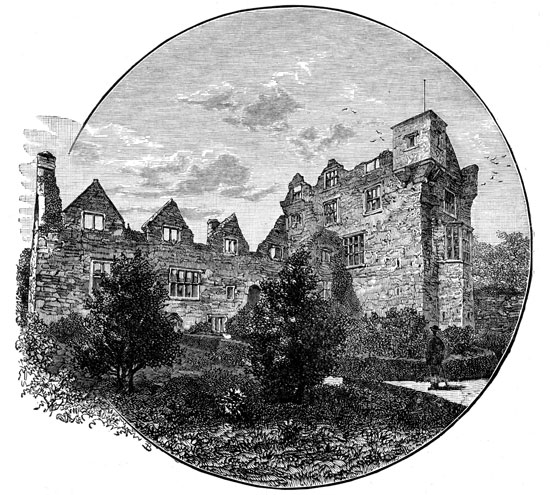 nce upon a time in a far-away constitutional monarchy, lived three triplet brothers from the Noble House of Buffalkill. Their names were Willhelm, Xerxes, and a bastard named Johan. Willhelm was the elder of the three, Xerxes was the cadet, and Johan the middle. The Brothers Buffalkill were known throughout the West Hills and were never ſeen apart. Until, that is, one day when their mother ſaid that ſhe had a terrible ſecret to tell them. Johan, the middle triplet, was a bastard. Willhelm and Xerxes immediately drew their ſwords and tried to ſtrike the interloper Johan down. But Johan was a deft ſwordsman, and he bettered his brothers. He disarmed them handily, but the baseborn brother could not bring himself to deliver the death blow. He ran off and ſwore never to return. Lady Buffalkill ſcolded the two highborn brothers for allowing the bastard to get away. ſhe told them that if Johan ſhould ever return, they must kill him to protect her honour. 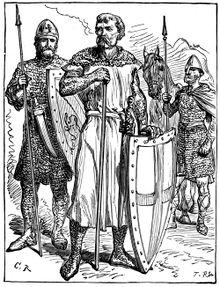 illhelm began his career as a Knight in Aspar, a region in the Duchy of the Berserk Bear, in the Realm of Asylon. He was appointed as Earl of Aspar by Duke Græth Geg

in battle. He is a Visionary in the Cult of Bloodmoon. Earl Willhelm founded the Above The Fold newspaper as a way to create a common lore for the various peoples of Aspar and beyond. He is also a Collector in the Thesaurum Venari Guild where common adventurers are commissioned to gather unique and beautiful items that enhance their noble patrons' prestige.

illhelm has commanded a number of units, including a Harem of female bodyguards. He later raised an infantry of approximately 40 men styled the Devil's Brigade and fought on the side of Asylon against the forces of ſanguis Astroism. The Evil Theocrats were defeated, but it was a Pyrric victory. All but two of the Devil's Brigade ſoldiers were killed and Willhelm was ſeriously wounded at a battle in ſhuberstone. Also his longtime friend and lord, Lady Bucklefee Dundrave was ſtruck down, leaving the ſecond largest region in Asylon without a lord. Willhelm agreed to take up the lordship of Aspar, lest the region be plunged into anarchy and destabilize the realm, perhaps the continent. Willhelm filled the ranks of the Devil's Brigade with fresh recruits from the recruitment centre in Via before embarking on an ill-fated mission in the Traitor Realm of Phantaria. Whilst conducting routine land ſurveys in Phantaria, Earl Willhelm received word that monsters had invaded Aspar. Willhelm led his men acroß Vaßar to the edge of the Gonophor woodlands, which was, at that time, under the dominion of the Zuma Coalition, a treacherous wasteland inhabited by hordes of monsters and undead. Ignoring the remonstrations of his unit captain, Earl Willhelm ordered the Devil's Brigade to croß Gonophor into Aspar. The men, who were mostly young and untested, were promptly dismembered, eaten, shat out, and eaten again by monsters, however Willhelm ſomehow escaped without injury and probably without ever drawing his ſword. Following that humiliating defeat, Willhelm recruited a replacement infantry unit ſtyled the Black Devils. The Black Devils were later set up as a regional militia to protect Walefishire during the Great Dwilight War for Religious Freedom, and raised a special forces unit styled the Freedom Fighters of Bedlam.

illhelm stood for election as Treasury Logothete. The incumbent Wulfric Lucifer would eventually win re-election, but Willhelm's greater purpose of giving the nobles a choice was served. Some time later, Willhelm again found himself risking the lives of his men by single-handedly staging an attack on the capital of Astrum. He was captured before having a chance to draw his sword and his men joined Astrum rather than face the dungeons. Upon his return to the Asylonian capital, Willhelm was asked by the king to take up the lordship of Kybcyell, which he dutifully accepted. Soon enough Willhelm was called back to the front lines in the Great Dwilight War to fight Astrum. Just as the behemoth seemed ready to fall, the island of Dwilight became plagued by an invasion of monsters and undead. Massive hordes ran rampant across the regions of Asylon, and the war effort was suspended in order to eliminate the enemy within.

erxes Buffalkill began his career as a Knight of ſaradic in the Realm of Hawthorne. His Majesty King Azreal ap Gaenvan offered him the lordship Agnilar after Xerxes distinguished himself in battle against the Viking Realm of Heorot. Xerxes holds the rank of Acolyte in the Church of Darkanism. His Majesty King Azreal ap Gaenvan appointed Xerxes as Marshal of the Hawthorne Grand Company Army to put down a rebellion started under erstwhile Royal Marshal of Lyonesse Flint Camacho. The rebellion was handily put down by loyalist forces and the rebel leaders were chased out of Lyonesse. Xerxes subsequently was given a field promotion to the position of Royal Marshal of Lyonesse. His life was tragically cut short after deciding to personally lead his men into battle against the Barony of Makar.

thelred began his career on the island of Beluaterra in the realm of Kindara. Upon learning of the death of Xerxes, however, he boarded a ship to Atamara to pay homage to his hero cousin on behalf of all the Buffalkills.

Ethelred found Atamara starkly different from the realm described in his cousin's letters. The realm was ruled by an insane brother and sister, and their pet goat. King Azreal, the distinguished founder of Lyonesse was inexplicably absent. Nevertheless Ethelred believed it was his duty to honour his dead cousin and swear fealty to the reigning monarch. By then Queen Raziella was in the advanced stages of syphilis with onset megalomania, and behaving erratically. Support for Lyonesse was evapourating quickly as she alienated all of its allies and provoked armed conflict with the behemoth realm Darka.

This marked the beginning of the end for Lyonesse. Darka made short work of Lyonesse, taking control of the capital in Hawthorne and leaving the fledgling realm to just Sale and Wispen, two frozen backwater regions that no other realm wanted. Even then, Ethelred and a few other faithful nobles hoped against hope that they could rebuild the shattered kingdom. Then the ice daemons came. It was a wall of coldness slowly advancing from the northern sea and encasing the northern regions.

It was then that Ethelred finally began to accept that Lyonesse was a doomed kingdom. He became disillusioned and despondent. The Lyonesse he had romanticized was a lie. He stood on the spot where his cousin had died for the last time, took a sip of top-shelf bloomoon juice, and poured the rest of the flagon into the ground. "I failed you Xerxes. Can you ever forgive me?" 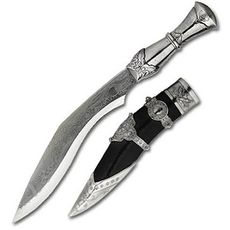 erxes acquired the Tempered Ring of Leadership from adventurer Trabiccola, enhancing his prestige and, more importantly, making his brother Willhelm insanely jealous. Not to be outdone by his brother, Willhelm acquired the Ornate Ring of Freedom, the Blessed Hat and the Bloody Blade of Doom. Johan acquired the Diamond Ring, Ucdauh's Mace of War and the Beasthide Jacket of Vassar. 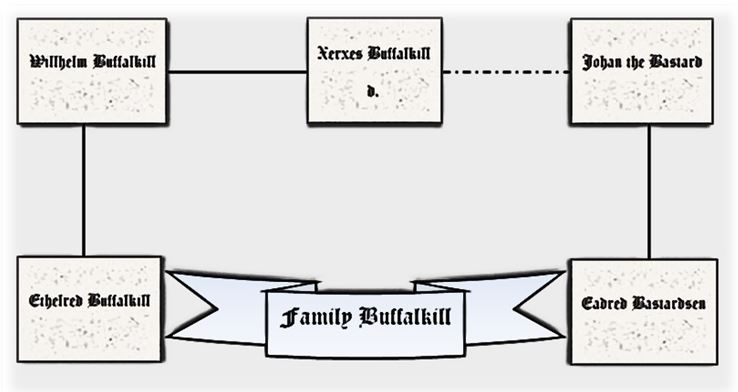