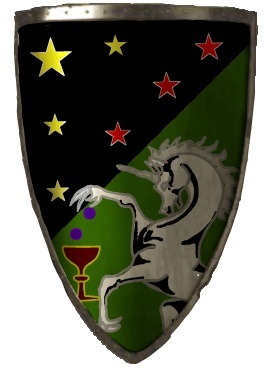 The Asylon region of Vyanar is a rural part of the Duchy of Itau. This region was named after a unique and now extinct local population of deer that used to inhabit the region trapped by the River Dunn and the Mountains of Chrysalids. The local population thrived by hunting and trading the furs, meat and horns of these plain feeders. The "Vyanar" were unique to this region as they only had one horn. Typically the horn was found on the right side of their heads. However, from time to time a variant was found with a left or centre horn. Local folklore suggests the "Vyanar" were fallen brothers to the unicorn forced to live a life as prey. It was often speculated this fate befell the "vyanar" because of their greedy deermaster who tried to steal the gold antlers of the pagan deer demigod Sorrendoar. The Vyanar were forced to live with one horn as punishment and as a symbol of its greed and selfishness. A single horn is often worn during ceremonies and special celebrations as a symbol by the present day Vyanarians to remind others to respect and care for their land, neighbors, family and friends. This brought the birth of their motto: victoria concordia crescit Victory comes from harmony.

Vyanar becomes a part of Asylon leaving rogue ties behind. Lady Bucklefee Dundrave is elected Baroness of Vyanar. The Buck Dredge Estate is formed becoing the first estate of Vyanar. Celebration! A new granary is built. The Grand Visit of Redemption II Fleisher Duchess of Itau, Marchioness of Itau, Ambassador of Asylon. A carving in her likeness was commissioned and placed in the Honour Garden; a place where people of significant value to Vyanar are honoured and remembered.

Discription of the Vyanar Code of Arms

The code of arms shows seven stars in the night. Four of which are golden and three are red. The gold stars represent the good guiding the region and the three red stars are the warning stars reminding the Vyanarians to use logic,mind,knowledge and to avoid rash decisions based on heart and emotions. The unicorn represents all that is good and glorious in the region. The unicorn is dropping grapes into the golden goblet and making wine. This signify's health and production by using the gifts of the land. The unicorn stands in the light and this represents the knowing and that knowing shows way to truth.

Vyanarians have long been practising the art of "[Rune Casting][1]" Small stones with lined images are drawn to answer questions and direct Vyanarians in great decisions. Rune Casters are praised and highly respected. The skill and stones are often passed down through generations. Rune stones are often made from valuable stones such as moonstones, obsidians or topaz stones.