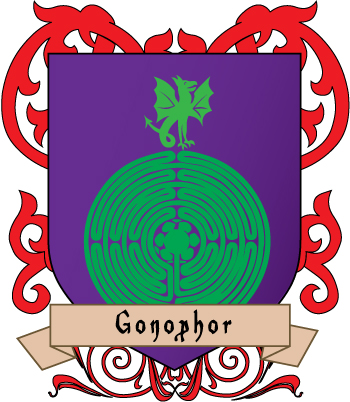 I am moving through Gonophor, I have noticed signs of monster activity. There is a large section of forest burned here and there seems to have been some sort of battle. I saw some poles erected in a clearing by a river with skulls of monsters with ragged cloth dangling from them. I moved passed this area with haste and did not tarry long. The other odd thing is there is large stones here erected as pillars in the grassy areas. The tops of the pillars are decorated with a symbol of a sun in spiral carved into the stone.

Asides from that there is a small village fortress by the lakeside, the people did not let me in and when I stated I was from Asylon, they claimed not to know of us. I asked them of what they knew and they said that there was a kingdom to the east called "Turan" and I explained to them that we know of this place and they said that the Turan men had been through here before, but left without doing anything.

They had also said they knew of a burned land of fire in the south, but they rarely went that far. I explained to them what I knew, but they insisted that they didn't want to hear about it, a shaman of the tribe spit a red ochre on me when I spoke and he waved handfuls of grass at me and said over and over that " I should not dream this" . I took it they have a superstition in regards to the Zuma and will not speak about it.

Gonophor is a vast land that extends from the big lagoon in the north to the territories of the Zuma in the south. Its emblem, a maze overseen by a dragon, could not be more apt, for it is infamously all too easy to get lost in the forests that cover most of the region, if not sticking to the few roads or travelling with a local guide. A story is told in the north of a handful of soldiers that got lost chasing a local brigand, and still haunts those woods in their eternal hunt.

One of the most interesting things about Gonophor is indeed its folklore. Before Asylon tamed and conquered these wild lands, a few groups lived scattered in the forests. Those people, now almost indescernible from other citizens of the realm, held beliefs about goblins and other creatures inhabiting the woods; and forest dwellers still claim goblins steal from them and sabotage their work. An almost constant stream of people pours into the borders of Gonopor from the Zuma lands, and with them their stories, superstitions and legends. The markets of the south are full of products from those exotic lands – textiles and spices - and the people of Gonophor readily accepted and reinvented new customs, inventing new dishes such as the famous twin soup of Gonophor. Gonophor is a rich mix of old forest superstitions, foreign rituals and the more widespread culture of the northern lagoon.

The economy of the region is more thriving in the north, where an harmonious cooperation between lumberers and drivers – boatmen that float the logs on the lagoon – supplies a great deal of building material to Lowervia and the neighboring regions. Aside lumbering, fishing is the other main activity of northern Gonophor. The famous tam'kin fish is dried on wooden poles outside the lagoon villages and salted, to then be sold in the south or exported to some Zuma regions. The center of Gonophor is untamed and wild, consisting mainly of thick woodland, impenetrable by anyone but the forest dwellers, and the south an harsh land bordering with the Zuma territories, constantly ravaged by monsters and scarcely populated.

There Is No Such Thing as a Simple Meal, a whimsical essay on the folklore of Gonophor by Ven Dhalgren