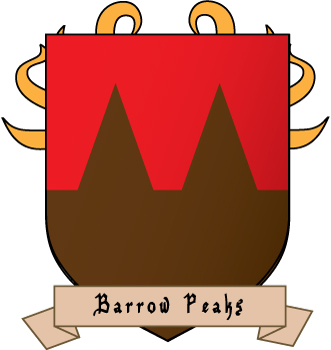 ... i travel until Barrow peaks searching for the gold mine who provide Golden Farrow, nothing found only mountain and stone, and monster, a lot of monster noone live here, i think this place is good for nothing, maybe as hunt reserve...

Barrow Peaks serves as a powerful outpost region. With fortifications, militia, and the difficult travel times to and from the region, it is a symbol of endurance. It is the largest mountain range in the area.

This mountainous region, while not having the biggest population, has many small mining villages and several quarries where people gather to make their living. Much of the population is based in the lower and mid levels of the mountains as the higher altitude in the mountains tends to take the most basic foods and turn them toxic due to the harsher living conditions. Roads between villages are kept clean of snow as best as possible, and fences are built along the sides of them to keep people from falling to their deaths below. The only real living problems are the bears and several other mountain predators that like to cause trouble with the livestock. Local militia are periodically patrolling around the villages to make sure they stay away.

Despite the harsh climate, groves of trees are maintained by some, allowing the production of cherries, walnuts, almonds, and apricots. Also recently, a small number of mango trees were discovered a ways out of the village of Rin. There are also a few very carefully tended fields of blueberries. Potatoes are also fairly common as they can grow almost anywhere. The local supply of domesticated goats, while small, is enough to allow the locals some minor specialty goods such as milk, cream, and butter. Unfortunately, this short supply limits goats as a food source, and bird hunting is difficult with the hazardous terrain. Therefore, wheat, vegetables, and salted meats are often imported in exchange for fruits or the various preserves made from them.

Currently, one of the major attractions of the region is the Cherry Blossom Inn. It was built around hot springs discovered by the first Lord, Velden Calanar. It is noted for its mascot, Chompy the Goat, the wonderful baths, and the beauty of the place when the cherry trees are in bloom.

The region is said to have a set of large doors that may lead to any number of places. At a guess, it might tie in to why this place was named Barrow Peaks. Other discoveries are constantly being made, and the number of secrets buried in this mountain range is untold to anyone.