Properly translated from the original classical tongue, the name Moira means "share" or "fate". Hence Moira's full name means "the fated amongst the women of dark countenance", a not unfitting name for a woman who for many years lived her life in the storm of controversy and now battles alone against the forces of darkness.

The third of three half-sisters. Some girls are destined to be great warriors or powerful matriarchs, Moira aspires to both - the bookishness of her sister Brigdha is mixed with the athleticism of her sister Aoifa and in that marriage lies an ambition that knows only the bounds of honour. A true Dubhaine.

Moira is dark of both hair and complexion with prominent features and a sinewy frame. Her beauty is that of the winter storm, harsh and irresistible, her body scarred from a lifetime of battles whilst her face is smooth as ancient ice and sharp as glaciers, gaze heavy with the weight of ages, raven tresses shot with hoar frost.

She wields Lannceann MacTiré, the Wolfshead blade of Asena, a gift from Duke Aeneas in her youth, and the very same black-forged war axe with which she led her beloved Imperial Cagilan Guard. Her longbow is cut from a single stave of Sirion rosewood, taken from an Elven scout during the Great War, and her deadly ash-shafted bodkins are fletched with black cygnet quills. At her belt hangs a skinning knife with a vicious hooked blade and a fighting guard, a fearsome weapon in such skilled hands, and her armour is a tangle of supple drakeskin straps with metal studs and padded silksteel lining. 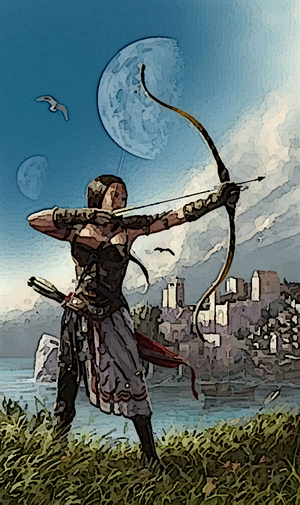 Moira is driven by a deep conviction that power should derive from the consent of the nobility, as represented by the knights of the realm. Democracy is close to her heart, although she would find the concept of letting peasants have a voice in the affairs of state incomprehensible: only the knights have both the education to understand the interests of the realm, and the commitment to serve it selflessly. Unfortunately her ideas run foul of the usual practice of feudal patronage, and she finds it difficult to see appointees who fail to undergo election as anything other than oligarchic impositions on the body politic. This is an area where cooler heads would keep their opinions to themselves, but Moira has a temper and is prone to righteous indignation when her views are discounted out of hand: therein lies part of the reason for her self-imposed exile from the glorious Cagilan Empire as the Republic as a system of government can be oppressive to a young noble starting out on her career.

Whilst her temper is tempestuous it is rarely seen in full flow and to most eyes she is by turns charming, gracious and downright riotous. The men and women under her command are all hand picked for their courage and skill, and she shares a camaraderie with them that defies all social conventions: she accepts and encourages familiarity from those who would willingly lay down their lives in her service and reckons it no diminishment of her honour to listen to their opinions. However on the battlefield she presents a grim, humourless demeanour and exercises iron discipline over her company.

Honour is a significant factor in her thinking and she will not turn her hand against those incapable of harming her. This is an ancient notion of chivalry and is partly mixed up with her private spiritual beliefs, of which she is very reticent to talk. As such she does not engage in looting or the lynching of defenceless peasants. The men and women under her command would probably do these things without a second thought as many of those who follow her banner have experienced the joys of freebooting: perhaps if a situation triggered other, deeper emotions she would let them have their head but you can be sure her conscience would plague her afterwards. There is always a price to be paid for unleashing the shadow.

Two children were born to Moira during her years in Fontan, three during her exile hunting the Zuma wastes of Dwilight.

Rhidhana followed in her mother's footsteps, becoming both a war hero and a prominent politician. She fell defending the gates of Krimml.

The second child was raised by her father Aeneas in Sultanate of Asena and was mother of House Gabanus..

Ciarghuala is a high-ranking noble of Dwilight best known for her life-long battle against the monstrous hordes plaguing the east, and for her leadership of the abortive attempt to reclaim Golden Farrow after the western continent was overrun. In recent years her careful handling of Luria's Grand Pantry has earned her many admirers and a coveted position as Dean of Economics at the University of Dwilight.

Scein is bound to the service of Taselak by the strange wyrd of her birth. Deathless and undying she opposes all who serve the infernal powers with fire and steel and unyielding determination.

Threiginion hunts the shadows of Dwilight continuing Moira's mission to bring justice to the unjust and death to the deathless, hoping in this way to overcome the wyrd of her birth.

Scein and Threiginion are twins, afflicted in the womb by Zuma sorcery. Though each is mortal, they are both bound to this world.

A record of battles Moira Dubhaine has participated in.

A record of Moira's more significant encounters with the enemies of humanity.

Moira started her career in Krimml, accompanied by a small bodyguard. She distilled her small retinue of retainers down to the barest minimum: the five men who originally formed The Imperial Cagilan Guard. Her decision to give her allegiance to Fontan in its war with Sirion, Old Rancagua, Light of Fountain and The Obsidian Isles was based on their much-vaunted democracy and the injustice of a nation standing against so many others.

Prior to commencement of the campaign, Moira swore allegiance to Marchioness Abigail Captain of Negev. At the same time she became embroiled in political controversy over appointment of the new lords of Montijo and Oberndorf, standing by the principle of accountable democratic institution of those posts in the face of broad public condemnation.

February 1008, The Akesh Temple Campaign & The Raid on Ashforth

Following her distinguished actions in the Oberndorf Campaign, Moira was assigned to the Democratic Guards for the final assault on Akesh Temple. The city fell early in the month, but the Light of Fontan government continued to put up stiff resistance for several days following the main battle and Moira was one of the judges presiding over the treason trials which followed.

Towards the end of the month she was inducted into the Lions and withdrew to Krimml to recruit a force worthy of the name, preparatory to the lightning feint through the Sirion marches that ended with the successful raid on Ashforth in Old Rancagua.

March 1008, Reformation of the Council of Defence

Low-intensity warfare and conquest in the Old Rancaguan Duchy of Kazakh, marred by political turmoil and an irreparable breach with Lord Sulliven over the reformation of the Council of Defence. Faced with an ultimatum and unable to ignore her responsibilities as a member of the Fontan Assembly, Moira resigns from the Lions and is reassigned to the Order of Thunder where she joins in the second wave of the assault on Avamar and the resecuring of the captured northern territories.

To celebrate the conclusion of their southern wars the Perdanese held a tournament in Partora where Moira settled old differences with Duke Aeneas of Kazakh.

May 1008, The Strange Case of Sir Louis de la Fere

The Red Shade Incident rears its ugly head once more. At the end of the month the Civil War erupts amidst the treachery of Dukes Gregor and Alexi, but Moira's journal is silent on the matter.

Fontan is in the depths of the worst conflict it has ever seen.

December 1008, The End of the Southern War

Months of desperate warfare with the Southern Alliance have left Fontan close to disintegration and Caligan sympathisers mount a coup in Oporto. Following its recapture by Levente Koga the nobility of Fontan elect a new Count to hold the territory and Moira turns her attention to other duties.

February 1009, The Servant of Justice

Moira's Rangers return to Ashforth after a fortnight fighting their way into and out of Sirion.

Regarding the Jens Trial

Location of Sages and Wizards (Beluaterra)

Location of Sages and Wizards (Dwilight)

Following the arrival of a mysterious sheet of blank paper Moira heads south from Caerwyn to the Zuma Coalition.

Moira seeks a new owner for the Elemental Scythe of Bloodletting.