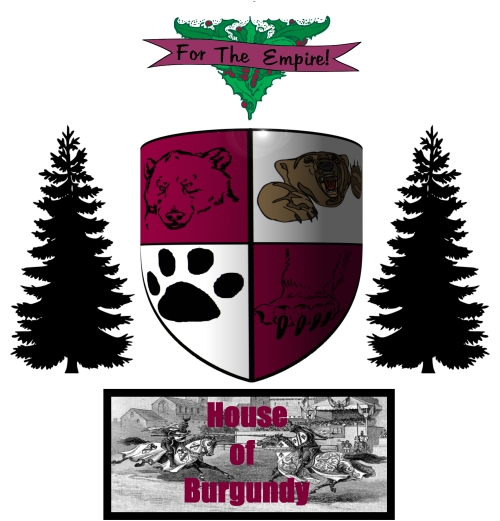 The House of Burgundy

The House of Burgundy only recently (several years ago) rose up from their previous obscurity to attempt to obtain for themselves a place in the sun as they enjoyed in their homeland (that was destroyed generations ago).

In the time between their homelands destruction and a few years ago, they were working to merely retain their status as a noble family and maintain their estate in Lamoni.

Now three young and ambitious cousins from the family have set out to make their family name great again, while accruing all the gold, prestige and power that is there for the taking.

As the House of Burgundy has risen, it has seen much improved fortunes. Across the lands of Terra they have achieved numerous positions of trust, and earned much prestige and honour in supporting their realms, all the while carrying the standard of Burgundy high.

Nobles of the House

He is the youngest of the three cousins, but also the most pompous and self-important, and this can lead to some embarrassing situations. His current home realm is Atamara, Cagilan Empire.

He stands about 5 ft 5", with hazel hair and eyes. He is barrel chested and has a broad stomach, but for all that he is well muscled and a decent fighter and commander. Many members of the family find this curious, as he was always more inclined to the teachings of trade and commerce while still at home. No doubt he would become a merchant if the opportunity ever presented itself.

Arguably the most skilled of the three in most areas, he has always been clever and calculating, slow to anger and a supremely skilled commander. He currently is a noble of Barca on Dwilight.

Standing 6 ft, with raven hair and eyes, he is a most deadly enemy to have. While he may be relatively unskilled in melee combat (the only area), the archers whom he used to command made sure that he need not use his sword. As a Priest, his current occupancy, he also need not use a sword.

At one time his life took a darker road due to events that occurred in the realm and to him. However, he was able to shake off the obsession that controlled him, and found solace in the teachings of and meditation on the Elements, specifically the Earth element. The dark power that was influencing him was also greatly lessened.

In recognition of his skill, he was promoted to Grand Imperator of Caerwyn, but later stepped down when war was brewing with Astrum. Rumour has it that he was on good terms with the Astrum General, and did not support the war, although other rumours have also been spread (as well as the given reason for leaving).

Subsequent to stepping down, he became a Priest, and later moved on to Barca to spread the Faith of Verdis Elementum.

A polite, likeable giant, he overtops most men by at least a head. He has seen several realms, and many sieges and realms falling. From Tara and the Cagilan Empire to Ibladesh and the Diocese of Aix, he is the most well traveled of the entire family. He has also seen numerous jobs, from warrior to trader as well as other activities. He now serves as a Knight of Melhed on Beluaterra

Heavily muscled with a mop of blonde hair, he may at times give the impression of stupidity. This would be a most dangerous mistake to make, one that in time one would come to regret. Exactly what his intentions are for the future are unknown to any but himself. That he has a plan is clear, but it is well hidden beyond the ability of any to pierce.

He has great sympathies for the people of the lower castes, primarily the peasants, which he acquired while serving as Knight and then Earl of Ejarr Puutl in Ibladesh.

Glowing Vest of the Vulcano (Lost)

From Sages, in order of creation:

Ucdauh's Shield of the Dragonslayer

An assortment of situations in which the members of the Burgundy Family have found themselves in.