Aoifa is the half-sister of Brigdha and Moira, a fact which explains their strikingly different looks. Tall and powerfully built, with red-black hair and a vigorous complexion, Aoifa was an adventurous child who has grown into a striking and fiery woman. Habitually dressed in the same simple black arming jack and hose as the soldiers under her command, she not only prides herself on facing the same hardships and dangers but on being the first into battle and the last to leave. Alebad Expeditionary Force is her unit.

In 1011 she returned to politics in the Colonies after a period in self-imposed exile, serving the realm of Minas Thalion as Ambassador and border scout. Later she was deported to Dwilight by the judge of Oritolon and there took service with Iashalur before returning and following the second destruction of Minas Thalion eventually settling permanently amongst the Assassins as Commander of the Dark Citadel. In recent years she's been famed for her public works projects, turning the Citadel into one of the most impressive fortresses in the known world. 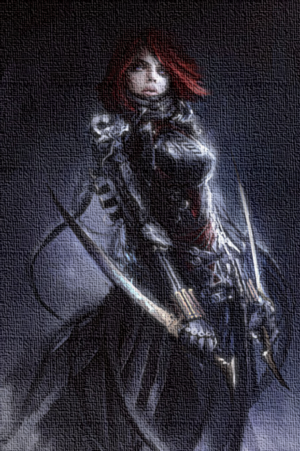 1012
Knight of Asurbanipal, February
Knight of The Assassins, March

A record of the battles Aoifa Dubhaine has participated in.

1009
March -- The Fall of Alowca and the funeral of Margrave the Drake, former General of Alowca. Aoifa heads north into exile
April -- Sanctuary amongst the Assassins

1011
August -- Aoifa reveals the fate of Denariel's Mace to Lady Allyah in a letter, recounting her duel with Denarien Squeaks

1017
June -- Aoifa begins a building program to turn Dark Citadel into the most impregnable stronghold anywhere in the known world
November -- Aoifa reached the semi-finals of the Jousts at The Long Tournament in Outer Tilog, so named because it lasted 10 days longer than the traditional 9 allotted
December -- On 15.12.17 Aoifa laid the last block necessary to turn Dark Citadel into a Citadel (7)