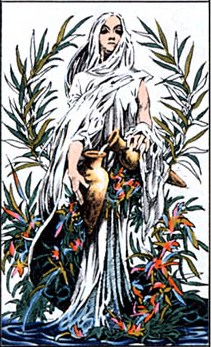 The symbol of the family, a statue amidst the fountain at the mansion, the Lady is believed to be an ancestor of the Haerthorne line.

The ancestral home of the Haerthorne family rests within the the city of Remton and the capital of Arcaea, lying on the banks of the Raen Duin. For generations they were impoverished and often childless, leaving only a small trace of the family left to endure their legacy.

Descended from Sir Edgarl Haerthorne and Lady Cioarnodal Veanne, there are two significant branches of the family line, namely those descended from both Rickhart and Melisande, brother and sister, and those born from Gaerrant and his wife Gwydda. The latter have the strongest hold onto the family estates due to the legitamacy of their children and acts of adultery committed by the others. With the death of Gaerrant however, Aerywyn ascended to patriarchy of the House and has made efforts to mend the wounds caused by Gaerrant and his father.

*Currently out of date and requiring an update.

Herein are kept the stories of the family which relate directly to aspects of their ancestry, their myths or the monuments they have left behind.

Originally believed by one of the many bastard sons of Gaerrant, Caim's true lineage was disclosed to him by his grandmother Gwydda following Aerywyn's death. A tall and handsome man with long golden hair and striking blue eyes, the boy who was originally called Willam is very much like his estranged father, yet he lacks some of his eccentricity and the bloodlust evident in later years.

The second bastard son of Caim Haerthorne (as he was never officially married to any one woman), Rickhart was the more wild of the two and the one left without a typical noble education. He travelled widely for a while without whilst keeping under wraps his full name, but after returning to Arcaea he fought hard and was soon made Lord Protector, but a defeat and a mental breakdown resulted in him disappearing for a year and coming back as a man of faith. He is currently and educator at the University of Topenah and a Cardinal of the Magna Aenilia Ecclesia. 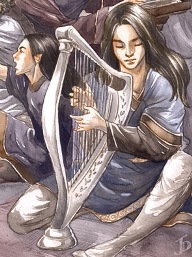 A younger Aerywyn playing the harp, lost in his music.

The eldest son of the now deceased Gaerrant, Aerywyn has now assumed the mantle of the family Patriarch. Not only blessed with talent and experience much beyond his nears, he is gifted with some of the finest looks of the family. His sister Aeriel often pokes fun at him for it. After being knighted at the age of 17, he drew his sword to fight for his homeland of Arcaea, and since then he has served her faithfully and unswayingly, achieving the rank of Imperial Chancellor and then Lord Protector in the war against Ethiala, Greater Aenilia, Sartania and Cathay.

The youngest sister, if Aerywyn is the heart then she is the soul. Though still a girl she has suprisingly proven herself in battle time and time again, yet her character does not reflect that. For the measure of Haerthorne passion in her she is rather quiet by the familial standards, and not so melancholic.

Aerywyn's twin and older brother, Tirilyn was a giant bear of a man who fought in Eston against the soldiers of Falasan before making the journey home to help defend Arcaea against her enemies. He was very close to both Aeriel and Aerywyn and his death caused some trauma to be left behind in the family.

He died upon the walls of Nocaneb, holding back the waves of Sartanian warriors storming the fortress.

The only child of Melisande Haerthorne and cousin to Aerywyn and Aeriel, Celyn fled the family home in Arcaea during the Great Northern War against his homeland with his mother. He has travelled across four different continents and seen war in many different lands, having been in Minas Ithil, Falasan, the Sultanate of Asena, Pian en Luries and Shadovar. Proficient with a long sword and with an intellect hardened by experience he has served as a close companion to the Queen of D'Hara, Lady Katayanna Ogren after finally settling down to a single place. An explorer of the far western reaches of Dwilight, there are few who know those dangerous forests and mountains as well as he does.

After a very long time aiding his Queen in exile, he has since left the continent after the Raivan Empire fell into ruin and gone to serve the Dominion of Alluran as Marshal of the Bureaucratic forces. Later he fell into a river, forgot where he was and reappeared a month later in time to be elected King and face the wrath of several thousand hungry monsters. The fourth invasion destroyed the Kingdom he had come to rule within mere weeks so that he was forced to surrender before all his people were dead. After that he joined with Duke Khaludh and Ambassador Mordred to found the Meridian Republic where he became Duke of Fwuvoghor and General of her armies.

Sadly there has been no word of his whereabouts since Giask sparked off the civil war.

Other members of the family

In addition to those mentioned there are a few young men who claim to be members of the Haerthorne family. Whilst I would not call them "true sons" of the name, I cannot truly say there is not some truth in their words. After all, there are many things that virile young noblemen do from time to time that don't really bear going into too much detail about. Whatever the case, they are worthy then we'll hear from them again. Best to let these sorts of things sort themselves out.