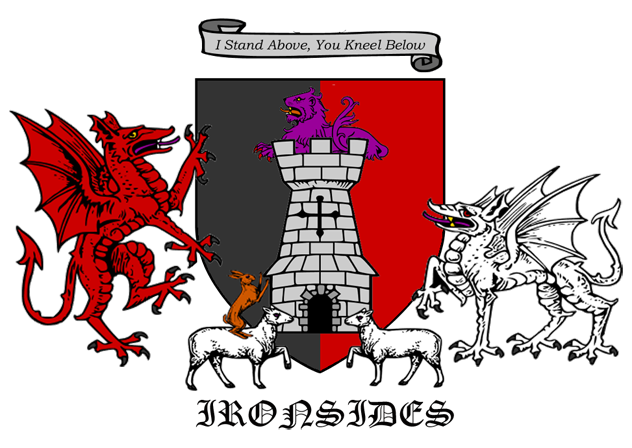 The Demon of Dwilight's Coat of Arms. The red dragon is "Glory," the white is "Destiny." Both are encroaching on the centre castle, which represents Lord Bowie's long sought after "Sanctuary." The sheep and hare are the common rabble whom attempt to divert, exploit and obstruct his Soul. The purple lion is an image of Lord Bowie's Soul lying comfortably over the elements that bombard his life. His personal motto, "I Stand Above, You Kneel Below," is reflected in the lion's posture. The shield is coloured sable and gules.

Saga of the Demon of Dwilight

* Volume One: Prologue to Chapter Nine

At the end of the Winter of 21 YD (9th of January), the new republic of Swordfell peacefully seceded from the Morek Empire. Immediately upon secession, entering the Spring of 21 YD, the Mud Crisis erupted centralizing around the fault line between Bowie and Sevastian Guile. Lord Sevastian was entrusted with the duty of seceding the Province from the Empire to form the Republic. The rivalry began after Sevastian refused Bowie's request, and then order, to resign from his position to allow for the Demon of Dwilight to be elected Lord Imperator. The subsequent four days were ripe with verbal jousting and the Demon's notorious lambasting tongue. Bowie dissolved Sevastian's membership to the community and renounced him as a usurper and enemy of the Republic. Sevastian accused him of impatience and even forged letters to incriminate Bowie in two heinous but invented plots. Throughout, many vulgar ridicules were launched against whom the Demon regards as "Sevastian the Brown." It was during this tense week of antagonism and fervent opposition that Bowie gleefully announced himself as Dwilight's Champion Insulteer. The Fellish were not as appreciative of the new title, but Bowie remained honest and steadfast in his cause. In accordance with the public, the realm allowed Sevastian his way on the condition that he resign after transferring the capital from Flowrestown to Balance's Retreat. On the fifth day, after transferring the capital, Sevastian, still only steward, decided he was not going to resign after all and with a swift stranglehold altered the entire realm to suit his whim. The Mud Crisis entered its second phase as the majority of Fellish nobles, the Morekan bunch not the Lurians, denounced and protested Sevastian. The Crisis entered its third phase, the cold feud of wills, when Sevastian's tyranny was ousted due to public protesting. Sevastian was fined two hundred gold by Chancellor Maxter Perkeleet. Bowie, pushed aside for bad behaviour, was defeated in an unrepresentative election for the ruler position - elected by the Lords only, not the nobility, as according to the set up leftover by the Tyrant Brown. Bowie was defeated by his long time friend and co-founder Abbigal Pike.

In reaction to the whole traumatic crisis, the Demon of Dwilight, out of his estate in Flowrestown, wrote and directed the satirical and highly politically charged play, "Lock Jaw," to dramatize and express his viewpoint on the whole affair. Near the end of the Spring, Bowie felt the need to make a sequel to his play. This one a personal lampoon of Sevastian Guile! He named it, "The Man in the Stone Tower" Not much time after, in the Summer of 22 YD, Bowie wrote and directed his most audacious play yet, "Too Hot to Trot"

Celebrating the two week anniversary of the Republic's foundation, Bowie hosted a party event at his estate, Casino Ironsides, called the Spring Opener! During the event, the first act was a fire juggling midget with a monkey assistant, followed by the reception of gifts from the Ice King Kity Ilyrians, who gave Bowie a special quill from the wing of an ice phoenix. The main event was a Roast of the Host, after which the night ended in pandemonium as the drunken Demon ordered in his swordsmen to wreck the party! It was the first of the best times in the Republic.

In the Summer of 22 YD, Bowie received a visit from his long time friend Lord Machiavel Chénier. They shared tea and stories of travel. Then, Lord Machiavel raised the subject of Bowie's estranged daughter Selena, a D'Haran Princess, and asked Bowie for her hand in marriage. Bowie accepted and wished Machiavel luck. The Demon of Dwilight is thrilled to attend his daughters wedding, to see her once again after a lifetime, and to know that she will union with an esteemed and reputable man. During this same time, Bowie participated in a spat of revelry and adventure with his friend Lord Claude Onyxis. The two were sent by Archmarshal Zarthra to takeover Alley of Swords and to combat monsters in Tranquil. They made more than the best of it.

Baron of Alley of Swords

After Lord Claude and Bowie conquered the Alley of Swords, Duke Deorwulf appointed Bowie as its Lord. Moving out of Casino Ironsides, with all those memories, he now takes residence in the badlands. At the very beginning of the Autumn of 22 YD, Bowie published an edited collection of letters on the bloodmoon fruit for the Theology Department.

Throughout the Crisis of Swordfell against the Tyrant Sevastian, the muscle of theoractism has attempted to frame the conflict as: the faith of Astromancy being persecuted by the heathen faction within Swordfell. This has become so toxic that Bowie and Lord Creed Avon, by virtue of not being members of Astromancy, are being fashioned into bogeymen. Bowie recognizes this new title with amusement and horror.

- The Demon of Dwilight, one of the Bogeymen of Astromancy, Autumn of 22 YD

Late in the Autumn of 22 YD, after elections in the Republic, Lord Bowie released another play lampooning the Tyrant of Stone. This one was called "One Voice Above All." It was written in a different tone and pace than his other plays, largely due to the reaction he got for his previous play, which was extremely vulgar.

At the end of Autumn, in reply to a request from Lady Imperatrice Abbigal, Bowie published his position on Astromancy and to explain his opposition to Theocracy. He called his work "The Voice of Heathen."

After Lady Imperatrice Abbigal fell ill at the end of Autumn, Lord Bowie replaced her by election in the Winter of 22 YD. He released his new historical survay titled "A Brief History of Central Toprak" to the History Department in the middle of Winter. Nearing the end of Winter, Lord Imperator Bowie had a palace built in his name in Balance's Retreat. It marked the end of his first half term as Lord Imperator and was celebrated by the peasantry.

Departing Swordfell in the Spring of 22 YD, on route to Port Raviel, to attend his daughter's wedding in the Summer, Bowie became the first Lord Imperator to travel abroad. His first stop was at a small tent way station just passed the border into the desert called Dryfont. He arrived in Port Raviel about a week before the beginning of Summer. He decided to find his old haunt, the Dizzy Duck, to socialize and catch up on times passed. There, he met his daughter for the first time after a lifetime of separation, who arrived to meet him with her fiance Dragon King Machiavel.

Early in the Summer of 23 YD, before the wedding and coronation even began, Bowie was forced to leave D'Hara and return to Swordfell when the tyrant Sevastian stole the capital duchy and gave it to Luria Nova. Selena and Machiavel were upset that Bowie had to leave so suddenly, as was Bowie, but he was duty bound to the Fellish nobility to return home.

At the end of the Fracture Period of Swordfell (circa Summer - Autumn 23 YD), Queen Alice Arundel came to Balance's Retreat to visit Lord Imperator Bowie. The visit was not the stately and polite company it was intended to be...

"The First Man of Central Toprak"

Bowie's term ended in the Autumn of 23 YD. His term ended in an unusual manner, having been imprisoned by rogues at the exact same time as elections began in the Republic. On agreement with the Fellish nobility, he did not campaign for a second term in office. In exchange for retirement from Swordfell's continental diplomacy, he was appointed Duke and Margrave of Balance's Retreat. This appointment earned him a personal record: that of being the only noble on Dwilight to have reigned all three cities of Central Toprak. By this, he thus claims a new title, "The First Man of Central Toprak."

Bowie published a memoir of his term in office, written while he sat in prison after being captured by rogues in the North Divide.

In the mid Autumn of 23 YD, Bowie was elected as Overseer of Swordfell. Simultaneously, he constructed the inaugural chamber of the Order of Aristocrats in Balance's Retreat. The Aristocracy will inevitably become the new social order of Dwilight.

Late in the Spring of 23 YD, Bowie was visited at Castle Ironsides by the mysterious Baroness Silent Ishida! Regrettably, duty called the Baroness before the two could get fully acquainted, and before they could enjoy the luxury of Duke Bowie's airy.

By the Winter of 24 YD, Bowie decided not to continue in his role as Overseer of the Republic and so he did not run in the elections of that year. To begin his semi-retirement, he decided to finally spend some quality time on the airy of Balance's Retreat. Quality time in the sense of watching a beautiful lady belly dance and enjoying the flavour of a whiskey.

Late in the Summer of 25 YD, the geopolitical arena of Toprak shifted due to the increase in tension as the war between D'Hara and Luria Nova frothed, the war between the Morek Empire and Libero Empire cooled (on account of the crushing defeat of the Liberonians) leading to the turning of attention of the Morek Empire. To represent the Republic of Swordfell as he could best, Bowie was appointed Ambassador of the Republic. He set aside his trading skills and class to become, for the first time in his life, a true authentic diplomat (rather than his usual behind closed doors dealing). Now it's official, title and signet and all!

Rumours arose in the Autumn of 25 YD about the disappearance of Bowie Ironsides, whether he was assassinated by Lurians, ascended to godhood, simply strolled into the sunset never to be seen again, or what most mothers prefer to tell their children, that his demon finally overcame his Soul and dragged him kicking and screaming into Oblivion. Suddenly, to the surprise of everyone, he clawed his way out of the ground after being trapped in his cellar when the roof collapsed in.

This however, was only a short breath of recovery. For immediately after he resurfaced, the Demon Prince himself vanished without a trace once again, never to be seen of or heard of by anyone, ever....

THE END
Retrieved from "https://wiki.battlemaster.org/index.php?title=Ironsides_Family/Bowie&oldid=176046"