A relatively small noble family from the continent of Atamara. 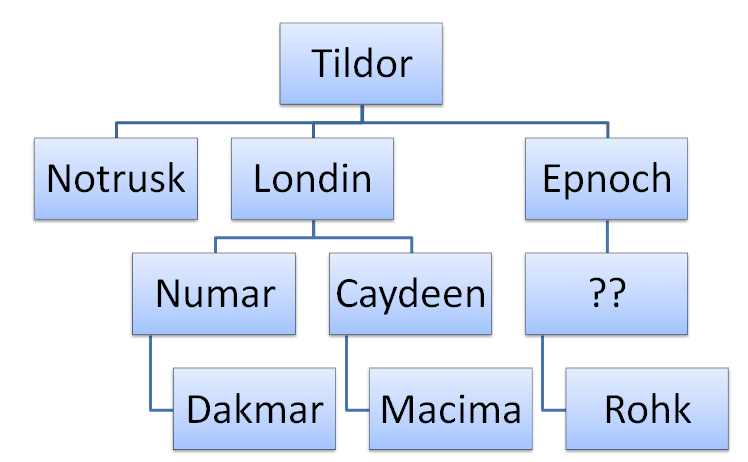 The Darksun family is originally from Washford. It was in this region that Tildor Darksun was granted a minor title from the Lord of Washford. Attending courts and maintaining family lands were the highlights of his career, but he did establish some family traditions.

As one of his first actions, he commissioned the crafting of the Brilliant Armour. The armour was meant to be inherited by the eldest son of each generation, as the standard bearer of the Darksun family. As such, when Tildor retired from active duty, the armour was passed on to Notrusk. Notrusk was a decade older than his next youngest brother, Londin, and a dozen years older than Epnoch. In one of his first battles in the armour, Notrusk was slain by a horde of pillaging monsters. The armour was retired to the family estates in hopes that Londin or Epnoch would one day take up the calling.

While Londin was content to attend court and muse with the other minor nobles about the fate of Abington, the Cagilan Empire and other realms of the day, Epnoch thirsted for adventure. He heard rumors of a land to the west, over the seas, Dwilight. They had received news of rich cities, prosperous trade routes and dangerous monsters from traders who traveled the seas. With permission from Tildor, Epnoch was given the Brilliant Armour to protect him on his journey over the seas.

Epnoch loved the lands of Dwilight and swore and oath to the King of Nifel Kingdom to protect the Kingdom from the fierce monsters of Mount Black Nastrond. In return, Epnoch was granted control of the fortress of Nifelhold. There he took a wife and produced offspring, but who the names of these children have been lost to time. When the King was overthrown by rebels and daimons swept over the continent, Epnoch stood firm in the fortress. Eventually, he was defeated. With no known heirs, and a lack of interest of his brother Londin, the Brilliant Armour was all but lost and with it the pride of the Darksuns.