Ibladesh is situated at the Great Southern Sea in the Southern Highlands of the East Island. Next to it flows the cold Raqqah River that comes from the dodgy mountains. It is also called the 'White City' by many people.

The name has its origin from travelers who came from across the Great Southern Sea. They used to travel in the day, but once they arrive in Ibladesh City, the night was fallen. The lake was covered with fog and only the best skippers could find their way to Ibladesh. When there was suddenly a high peak of an enormous white palace in front of them, they knew they arrived. The many lights, of small houses around the main square of Ibladesh, together with the mounting palace, made the city look like a city covered in a white glow. From then on it was known as the White City

The White City is the biggest and richest city on the continent. They have strong fortresses around their carefully divided pieces of land. Everyone needed a place to live, as the surrounded forest or mountain regions didn't managed to provide sleeping places for all their citizens. That's why Ibladesh City depends on trade very much to feed its own citizens. Though there is a good amount of metal and stone available, and some wood. Those were cultivated from the industry side, where many people find their work.

Although there is this daily ruling chaos in the city, there also is time for order and discipline too. Many guards guard the awe-inspiring temple district of The Church of Ibladesh. They were dressed in white clothes above their mails, helmets on their heads and swords in their hands, ready for battle. The famous Ibladesh Palace Guards. The same who guard the sacred Palace of Ibladesh.

The former capital of Ibladeshian Empire.

The Portal of Blood 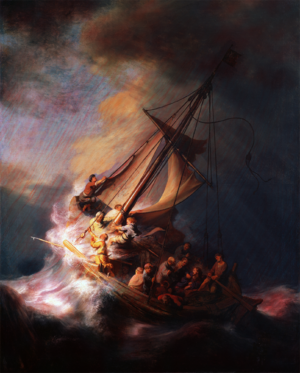 Circa 1018, a commoner of name Jebediah opened a portal in Ibladesh, hoping for the blood of the people. A month or so later, his prayers were answered: it rained blood in the White City, turning her Red, and making the river and the sea waters crimson.

See this page for a compilation of the events and RPs.

A young man wriggles his nose. There is something crunchy in there beginning to form a crust inside his nostril. Up goes his finger to extract the offending dried mucus. Rolling it between his fingers in mild interest, he flicks it into the Great Southern Sea from the dock he is sitting upon. But then the air between his nostrils flows unevenly. Up goes the finger again. This time the offending mucus has a gooier texture. Out it comes in a long string. Fascinated, he rolls the string into a ball and explores its viscosity with his fingers. Stretched and balled, wiped and rolled, the mucus eventually loses its stickiness and is flicked away into the Great Southern Sea. At which point the man jumps in sudden startlement.

Engrossed in his gooey mucus, he had not noticed that the Great Southern Sea had become red. Sticking his finger into the red water and tentatively tasting the red sea, he recognizes it is no longer water, but blood. Looking up at the portal beam initiated by Jebediah of Nivemus, he sees it has now turned a sickly, pale shade.

Across the coastline of the Great Southern Sea, the lake of blood is realized; along the riverbanks of the Raqqah River, the river too is observed to now flow with blood. Bloodfoam collects upon the beaches of the Great Southern Sea with each lapping wave of blood. Bloodrain slowly drizzles over the city turning the white spires of the city red; soon the city begins to be referred to not as the White City, but the Red City. Blood even fills the wells, to the city's chagrin. Bleeding statues fascinate Ibladesh's population and spark a religious revival. Barrels of blood mysteriously populate the city's streets. Bakers bake bloodcookies. Blood Blood Blood Everywhere! Blood ballads are bellowed by bards:

A variety of blood rituals are suddenly quite the rage amongst the population. Women begin usage of blood-based skincare regimes, young men paint their bodies in blood before going off to battle, and children play Blood-Blood in the streets. Ibladesh's local nudists now bathe in blood as part of a fertility ritual. All documents must be signed in blood to be legally binding. And dancers slather themselves in blood and cover themselves in seagull feathers before going dancing.

All along the coastline and riverbanks, rumours spread throughout the realm of folks drinking the blood. Serfs chatter about vampires in the area. Merchants gossip about blood drinking being an aphrodisiac. Minor nobility discuss a blood cult operating in the locale.

Noble commanders in coastal or riverbank regions are aghast to notice that their captains' mouths are bloodstained, but their captains do suddenly seem much more capable of leadership than before. Apparently enemy captains have united in blood-drinking camaraderie unappreciated by their noble commanders. The bloodthirsty captains also write their captain friends elsewhere in the realm to come on down to the river or coast and drink some blood, and soon troopleading nobility are confronted by their captains with an inexorable desire to visit the crimson coast or the red river.

Tournament in the Red City

Tournament Announced Deklan Fuor, Margrave of Ibladesh, Priest of Church of Humanity has announced a Tournament of Swordfighting to be held in Ibladesh 5 days from now. The winner will be rewarded with 600 gold in addition to the honour and prestige that his victory will earn him. There will also be a reward of 300 gold for the runner-up. All nobles of the continent are welcome on the tournament grounds on the day of this event. Make sure you announce your participation in time.

Tournament Report The tournament in Ibladesh is over. 9 nobles from 7 realms fought and drank. It was a swordfighting tournament. Smiddich Fontaine, Duke of Black Bladed Phoenix, Margrave of Bescanon, Marshal of the Perdan's Golden Lions won, with Sir Jeames Dacara, Representative of Ar Mosul coming in second place.

Margrave Deklan (Arch Cleric of the Church of Humanity) is attacked in the Red City during the Blood Weeks. He bleeds for several days before getting back on his feet.

An Execution by the Bloody Shore

Public Execution message to everyone on East Continent - 36 minutes ago Messengers bring news of a public execution in Al Arab earlier today. Sigurd Erickson, a noble of Alara, had been banned from The Noble Constitutional Monarchy of Perleone as a traitor on 7th August, 2018. When he was later imprisoned, Prime Minister Mary Anne de la Fere Bluelake of The Noble Constitutional Monarchy of Perleone decided to make him pay for his treason. Background info on this family.