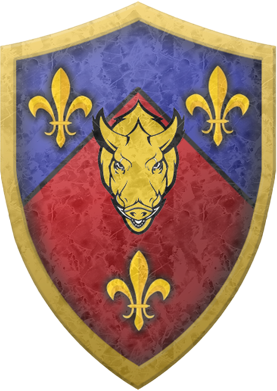 When the family patriarch, Karl de Bardt, passed away, he left his modest estates to his eldest true son, Johann de Bardt. He was also survived by his two natural sons, Jean Alain and Luc Tancred, and his daughter Alyssa and his youngest son Henri. Karl de Bardt was a doughty warrior who fought in the Viking Wars as a troop captain for a more prestigious knight. He was lamed by wounds received in one of the many sieges and spent the remainder of his life confined to his estates, raising his sons with sometimes harsh but always disciplined affection.

Johann is the current head of family. While younger than his two half-brothers, he was the eldest eligible true heir. When Johann came of age, he was knighted as a Paladin of the Venerist Paladins, the warrior clerics of the Venerable Order of the Citadel. The Venerable Order of the Citadel was the more populous and warlike of the two state religions of the time in Eston, dedicated to veneration and memory of ancestors. Johann is extremely earnest, loyal to Eston to the point of self-sacrifice, and quite firm in his espousal of the knightly virtues. By virtue of his virtue, Johann was eventually granted the lordship of Saradic where he served for several years as a benevolent and industrious lord. During that time, he left the warrior caste and the Venerist Paladins to become a bureaucrat, specializing in administration and economic development. As a bureaucrat, he developed profound respect for the diligence and acumen of Lady Athena, minister of the bureaucratic corps. It was a shock to the entire kingdom when Good King Andrew was suddenly taken ill and passed away. To assist in the elevation of his own liege Kealan to the Duke of Hawthorne, Johann nominated his trusted vassal Sir Lemonade to the lordship of Saradic and himself became lord of his liege's former lands and family home in Melias. During the chaos of the ensuing dynastic successions from King Christopher to Regent Torik and back to King Christopher again, Johann became increasingly despondent and dissatisfied with the political meddling of the Venerist church and its self-aggrandizing secular leader, Duke Basil. With the repeated unanswerable slurs of the priest VonSchmuiga, Johann abdicated his lordship to his former liege Kealan and took up the cloth as a priest of the Warrior Saints.

Jean Alain is the eldest surviving member of the De Bardt family. The bastard child of Karl de Bardt, Jean Alain loved his mother dearly. In her youth, she was the loveliest milkmaid in Melias -- which surely caught the eye of Karl. When Jean Alain was only four years old, she took ill from the plague and passed away within a week. Jean Alain was taken into the home of Karl de Bardt and raised alongside his younger half-brothers. A skeptic by nature, Jean Alain believes that pragmatism is the best way to live. Somewhat against his better judgment, he found himself a Paladin by virtue of the only liege who made him an offer. When the paladins were disbanded, Jean Alain was quickly recruited by the Army of the Citadel to become the Lieutenant Marshal. Due to his continuing contributions in time of war, Jean Alain was also appointed to the King's privy council.

Luc Tancred is the second oldest bastard son of Karl de Bardt. The son of a camp follower, he was never formally recognized by his natural father. As such, he has lived his life as a peasant. Upon reaching adulthood, he learned the truth of his birth and tried to find his father, only to find that the old man had passed away. He found, however, that his half-brothers welcomed him into their household. The noble life was not to his taste, so when the youngest son, Henri, left Atamara to find his fortune, Luc Tancred followed the feisty lad to keep an eye on him. During his adventures on the Far East Island, Luc Tancred discovered the *Ornate Brooch*. After following his younger half-brother Henri around the island to protect him, Luc Tancred remained behind in Cathay when Henri's liege swore allegiance to Mosesadelphia and found a patron in Duke Valgar, Grand Marshal of Cathay. While acting as the Duke's agent, he obtained the *Aldill's Book of Forbidden Knowledge*, the *Cursed Buckler*, *Taron's Staff of Betrayal*, *Golden Feather of Warding*, the *Sturdy Helm of Protection*.

Henri is the youngest child of Karl de Bardt. Fervently dedicated to the romantic notions of knighthood, Henri wished to make his name in the world by achieving great deeds. His first stop, in the Sanctum of Casshern, lead to disaster as the city was sieged, starved, and eventually razed. Escaping before the final destruction and civil war, Henri found an honorable and seasoned liege named Lord Cesari in Svunnetland. In time, however, the wicked witch of Svunnetland had chosen Henri and his liege for one of her blood sacrifices, forcing them both to flee -- Ceasar to Soliferum and Henri to Nighthelm where Baron Boromir had arranged asylum for him with King Thraymn. In Nighthelm, Henri found the happiest time of his life in the service of the generous, beautiful, and wise Duchess Melpomene of Haul. As more and more chaos grew in Nighthelm, the duchess eventually changed allegiance to Cathay but bade Henri to fight in Nighthelm to the last -- which he did. As the final chapter closed on Nighthelm, Henri petitioned the duchess Melpomene for return to her service and she granted it, causing Henri to become a citizen of Cathay. Sadly, however, she was soon to board a ship for Dwilight, recommending before her departure that Henri be made Duke of Haul. It was not to be -- instead, the feckless Lord Volvus was made duke and immediately switched his allegiance to the new realm of Mosesadelphia, itself feasting on the ashes of Nighthelm. Duke Volvus earned his estimation of fecklessness by leading repeated assaults against Arcacea and Sartania with pitiful forces across great distance and without coordination. As always, Henri served loyally but felt more of his old aspirations fade away.