It was a small noble family, that houses in the beautiful Tolhaur, Atamara, near the lake of Lady Lavigna. Few had suspected this family to grow as strong as it is today, yet not in its own lands. The first one to leave the house was John, he was a noble, yet weakened man. The second one was Cartor, perhaps the most noble of them all, and surely the most eloquent. The third off-spring was Martana, a wild-minded Lady who took her residence in Ikalak. And the last one, was Foreign, perhaps a tactical genius, perhaps a genuine zelot, perhaps the two always lay to close together to know which one. (Family Fame)

This family is also known for its several writings. A scribe would gladfully present you with all information that was gathered through any accessible archive about the roleplays of this family.

The Curs family is a small but very social family, with much friends, such as the Nosferatu family, the Fortescue family, T-Style family... Few of the members of the Curs family have actually become active in military or diplomatic activities in kingdoms, but those who did, have achieved great glory. The other members cherish the glorious life of a famous family too much to go out adventuring on their own, as they are very well-known and well-respected in Tolhaur and surrounding regions.

A broken man yet a man with dignity, he stayed in Darka for a long time, fulfilling his duties first as soldier and soon as Lord. Although his loyalty was not to be questioned, he had to retire to his family mansion too early for his capabilities. He suffered from severe back problems once caused by falling out of a tree once, he looked much older than he is, and didn't like to be seen in the open.

Seclusion and constant pain had marginalized John over time, making him social defunct and incomprehensible company. At the age of 42, he died in one of the few times he could find sleep.

The man of words, and fair deeds. Always courtly in his manner, he has achieved to fulfil a famous history in Caligus. He rapidly made his career after becoming the Marquis of Tokat, a region he loved dearly, as he always will keep loving cities. He became General for only a short while, because the retiring of his brother called him back home for a few weeks. The contributions he gave to Caligus as General, were quickly undone by the incapable William Draconius. Already made the Senator position of Caligus, he had no trouble to reestablish his position in Caligus, as being first Marshall of Domus for a very long time, and then being granted the title of Duke of Domus, succeeding the dead hero Dzikun.

During his reign above Domus, he met Erica, the niece of the deceased Dzikun, and fell wildly in love. He maintained this position for a very long time, until he was captured by Yssaria and his title was forfeited to Tramii. Once he came free, he was appointed as Banker to fill in for the sick Vlad Nosferatu, and nobly stepped down to give him his position back. After that, he was given his title of Duke of Domus back, and gained the title of Judge of Caligus not much later.

Erica and Cartor are now living in the Palace again, although not as Duke anymore, and neither in Domus too. The capital had moved to Partora and the royal ourt had taken its home in the old Perdanese capital. Over time, Cartor had grown old. Too old perhaps. Although he was still as capable of fulfilling his job as Arch Priest as he always had, he had grown deeply cynical. He dares to make cold, bitter remarks concerning feeble or naive behavior, knowing from his experience in life that most things look prettier than they are. When he sees hypocrisy, the worst thing in the world in his opinion, then he is the first to address it in the open, mocking the hypocrite and being bluntly honest. But even though his bitterness, no one could ever dispute that he was right in his remarks. In addition to his cynicism, he has turned himself completely to the sport of tournaments and the skills, being a master in them already.

Because of this and the more and more obvious difference in age, Cartor and Erica live in a loose relationship, permitting each other several freedoms. The situation has evolved even so that Cartor is rather considering to adopt her than marry her.

The loss of his sister depressed him greatly, leaving him only with feelings of guilt and regret. 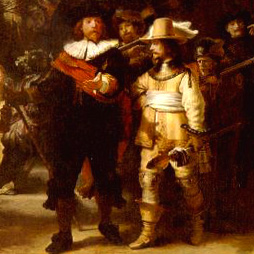 Cartor Curs is on the left, very broad and dignified. Although he might give the "air" of a spoiled noble, he is a man of logic and ratio. Let his courtly behavior not fool you, in battle or in a duel, this man is a grim adversary.

On the right is Foreign Curs, as you can see a man mostly of deeds, he never leaves his house or tent without a weapon. He knows his stance amongst men and wants to be respected as such.

A vague figure, she was a wild girl when a child and a vigorous woman when an adult. It was impossible to keep tracks of her whereabouts during her continuous travels, but it is sure know she had fought in Beluaterra and was an infiltrator once. She was the only active family member still living in Atamara until August, when she moved back to Beluaterra. To become the High Marshal of Heen, a promising realm. After a sudden election which she won for her culture-politics, she was rumored to have gained rulership over the expanding realm of Heen. At the age of 47, she was killed in a battle, leaving the throne of Heen empty for its first successor in more than 5 years.

The reason for her continuous travels and unsteady life can be retraced to an incident in her childhood, when she got pregnant from a shepherd in Tolhaur. To cover up the disgrace brought upon the family, her brothers Foreign and Cartor forced her to give up her child at birth, and they sent it out over sea. Her oldest brother John, objected at first but was left helpless to her because of various attacks of pain. After a year of complete isolation, forced upon her by her family, word reached her that her beloveth shepherd had committed suicide. She left the family mansion forever to wander over the world, regardless of what risk she might face. She played with her life as an infiltrator and the ferocious battles she fought in Heen, but she did not care. She only found will for life again when she found the love of the people in Heen.

She was never reunited with her son, Lucius, and although she found it in herself to forgive her brothers, she never had the chance to reconcile with them.

A tactical genius who took his residence in Perdan. After half a year he was noticed for his bravery and ideas and was given the position of Senator soon. He contributed a lot to the Perdan warfare, although details are restricted from public notification. He held the title of Marshall of Aix, and Praetorian Strike Force Commander, now currently he remains Senator. He lost his heart to the Queen, Lady Clarissa, and hopes his love will be answered soon. After suffering a bad case of amnesia he is not sure of what he feels anymore...

In search of solitude and reflection, he left Perdan and sough a new home in Soliferum, Far East. Because of his knowledge as tactician and mentor, he quickly gained the respect of many noblemen in Soliferum. He was awarded a spot in the Department of Defense, and later on the valuable position of Baron of Dsinanas. He is a sober yet wise man now. When he decides to share his thoughts, you can be sure that they are considered deeply and that they come from years of study and reflection.

Because of political turmoil in Soliferum, Foreign and several other nobles created the People's Party of the Republic, which now serves to improve and maintain the governmental system.

The youngest member of the family, son of Martana Curs and an unknown shepherd of Tolhaur. By the hand of his two uncles, he was given away and he grew up in a commoner's family in the Far East. Coming to age, his foster parents gave him the letter that his uncles left him with. His true identity revealed and his heart still young, his mind could only think of revenge and he left his foster parents to explore the world. After long time, during which he met Charlotte Grancourt, he was finally recognized as a noble in Soliferum, the same realm that was home to his uncle Foreign.

His uncle payed him to leave and seek his fortune in Dwilight, together with Charlotte. There he resides still. (Lucius Curs)