The Blatkovetchkin family originated sometime in the history of Sirion.

Pasha and Masha are brother and sister who grew up in the dense districts of Sirion city. Their parents died when they were still very young forcing Pasha to get a job and take care of his sister.

When he felt he could do no more, he abandoned the realm and went on the first boat to Dwilight, when he arrived there a gang of robbers ran up to him and knocked him out, taking all of his belongings. The next day Pasha found himself in Yaren, a small region in the Springdale duchy of Morek. Thus, bringing us to where he began his life in nobility in Morek.

Masha had a very different life. When Pasha abandoned her she was 17 years old, she then went to Hillmar, searching for work as a young woman warrior. When she found nothing there she traveled far to the region of Dolmbar, which was ruled by the legendary hero, Doc Primus. She went up to him in search of wisdom and guidance. He was quick to give her a percentage of the region. From then on she lived practically on the battlefield.

Natasha, the last member of the family, was a bit of an outcast. Her father, Yasha, was the brother of Sasha, mother of Pasha and Masha, thus making her a cousin of Masha and Pasha. Natasha had a better beginning but a far worse ending. While growing up in Ibladesh, far south of Sirion, she was closely nurtured by her parents. Then she began to have thoughts. "I hate being treated like such a child!" "Why do I have to listen to their lectures?!" The next months of her childhood were mostly long arguments with her parents, mostly ending with screaming and threats. Then, Natasha could take it no more, she ran away from home and took up a life of adventure. 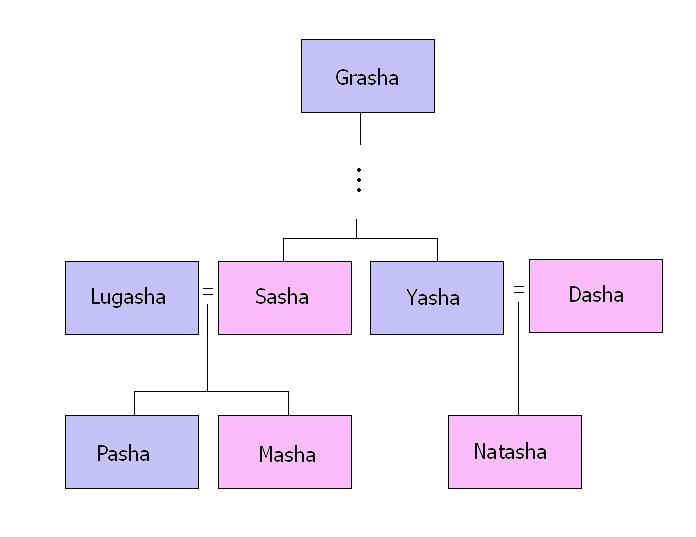