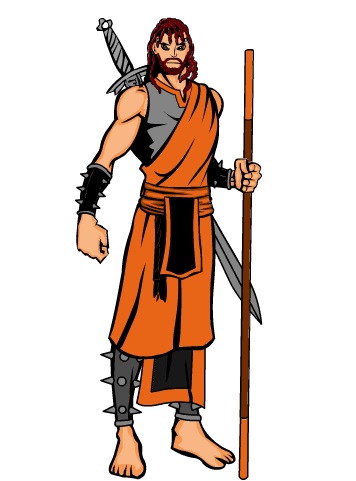 The youngest of the Vellos family, Amekal was also born to Imnestra. At a mere age fifteen he met the love of his life, a trader's daughter named Eseda. He followed her back to Icegate, where he fell madly in love with her, and she with him. For two months in Icegate, they grew to love each other more and more. But that winter, she was kidnapped. Driven mad with rage, Amekal took up arms and hired several men, and followed the kidnappers. He caught up to them in Howling Waste. All fifteen of the kidnappers were butchered, slaughtered. Unfortunately, in the fray, one of the vagabonds slit Eseda's throat. When the battle was over, Amekal found the white and blue crest of Eston on the kidnappers. He swore then to destroy Eston at any cost. Utterly demolish its people, crush its will to fight, reduce it to rubble. To achieve this, he joined the Barony of Makar. After several months of fighting in that wonderful realm of Vikings, Amekal was called by Qyrvagg to Valentia, in Beluaterra. There he planned to meet Baiko, the Master of the Holy Hosts of Qyrvagg. He broke off in mid campaign, and emigrated to Beluaterra with all possible speed.

On his way to emigrating to Beluaterra, he summoned his family from Moramroth, a war torn and ruined region, with all speed. He set up a new manor in Icegate, capitol of the Barony of Makar. It is rumoured that Amgar became angry at him because of this.

About the same time, Amekal pledged to live his life in the frontlines, glorifying Qyrvagg with mighty blows struck by his hand, with his troops, the life of a hero. When Amekal arrived in Beluaterra, he joined the fledgling realm of Valentia. In this land he hopes to set the permanent home of the Church of Qyrvagg. He now awaits the arrival of Baiko, the Master of the Holy Hosts.

While in Valentia, Amekal recieved word that the Church of Qyrvagg had spread beyond his wildest dreams. There were believers in Sartania he had not known about, and in Oligarch, Lasanar, and Sirion too.

Then, after several weeks in Valentia, and after being betrayed and framed, Amekal was forced to flee to Riombara. But, in fact, the flight had been planned weeks earlier, for Amekal had recieved a vision which told him that he should go to Riombara.

After a brief stay in an Avalonian jail, Amekal was released, and hastened to Riombara, where he was greeted cordially, and met a friend. The friend was named Marc, and was a reltive of Paul, one of Hireshmont's close friends in Oligarch.

In Riombara, it seems Amekal has found a true home. The finances for the Temple accumulate quite nicely in a realm with good tax returns. Baiko and Amekal eagerly aited the day when they could first worship Qyrvagg at the Temple. The preparations neard completion. Permission to build had been granted, and the funds collected.

Eventually, the Church truly began to flourish. Nobles announced their support, commoners were converted, and temples built. All was as Qyrvagg willed it.

After several months of leading the Church, Amekal vanished under mysterious circumstances. He was later reported to have been spotted serving under a Taselakian banner in South East Island.

Mere weeks later, he was reborn in Riombara, and his spirit rejoined his body. But something odd occurred. His right eye shot light forth. He sometimes referred to himself as Amekanun even. He was different, so very different. But at times, the fire in his right eye dwindled, and he was Amekal as usual.

Over time, Amekal has remained the longest standing, and by far most revered, Prophet of Qyrvagg, writing the majority of the Tome of Wars.

Then came a fateful day when Duke Marc seceded the city of Irombro, and Amekal left Riombara to join Irombro, as he must, because it is the realm which holds both the Grand Temple, and the New Grand Temple. Thus, he joined Irombrozia. While in Irombrozia, Amekal continued to lead the Church, and domestically aid Irombrozia in its early days.