This is our term for roleplaying the game as it is meant to be. That does not mean pages upon pages of text, but rather playing your character as if he were a real human being in a real world. You can be as short or elaborate as you want to in doing that, but try to be realistic.

Here are a few short guidelines, and further down you will find some points in more detail. Remember that all these are guidelines. Every now and then, there is a good reason to ignore one or two of them.

Some Points in Detail

Playing the game sometimes requires use of terms that can be considered OOC. That's really not a big deal. Two guidelines might help in smoothing everything out:

Titles and Forms of Address

The most important part about this, however, is to create and sustain the proper atmosphere, not to be fanatic about names or titles. Remember: Even the real nobles did make mistakes, and it wasn't always 100% clear just how to call someone.

Some additional information can be found in the Roleplaying Primer Wiki Page.

We all play to have fun, but there is a difference between humour and slapstick. In a serious medieval atmosphere, there is still place for humour - the witty kind that nobles would use. There is no place for humour of the "US college comedy movie" kind.

Likewise, we don't want to see anyone named "Darth Vader" or a unit called "=={XCW}== Da Cr8z1es". Names are important in a medieval world, and should be real. Some realms on other islands have a "funny" atmosphere to it. Vikings are fine, but they aren't just crazy lunatics, and you can properly roleplay a viking realm. Outer Tilog, well OT is unique. Don't try to copy it, especially not where we are looking for serious medieval atmosphere.

Names don't have to be "real" (as in: Someone was really named that), but should be acceptable as a name that someone could possibly have, in a european place. The Name Change Failed page includes a list of names and naming styles to avoid.

While these are acceptable on other islands, we are very, very sceptical about them on any island where we are looking for a serious medieval atmosphere. Some will be ok, a little bit of orient can spice things up, but the vast majority would only dilute and disturb the atmosphere. That goes especially for any asian or american concepts. Basically anything that the middle ages did not have much contact with. Again, there are other islands in BattleMaster where these ideas can be explored.

There is still an incredibly broad and deep variety of themes and cultures in Medieval Europe that you can draw inspiration from (Spaniards, Greeks, Baltics, Eastern European Cultures). There is quite enough variety without having to blend cultures that realistically never would've had much to do with one another. A little bit of research will turn up a lot of results.

This also extends to political concepts - if you insist on being the Socialist Knight you will probably be stripped of your title. Likewise, the Government System Wiki Page points out that Democracies are not like modern Democracies - they are more akin to the Parliaments of Medieval England than anything you would see today. So when you talk about "Democratic" ideals - be sure that you understand just what sort of Democracy you're touting.

On any island explicitly marked as one we want to have a serious medieval atmosphere (currently: Dwilight), the above guidelines will be enforced by the ruler of each realm, which means anyone breaking them repeatedly or so blatantly that it hurts the atmosphere will find his character deported to some other random island.

An Exhortation Concerning Good Order and Obedience to Rulers and Magistrates

From THE BOOK OF HOMILIES (1560s I believe? Someone correct me here.) 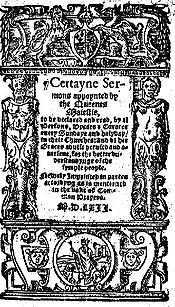 Almighty God hath created and appointed all things, in heaven, earth, and waters, in a most excellent and perfect order. In heaven he hath appointed distinct orders and states of archangels and angels. In earth he hath assigned kings, princes, and other governors under them, all in good and necessary order. The water above is kept and raineth down in due time and season. The sun, moon, stars, rainbow, thunder, lightning, clouds, and all birds of the air do keep their order. The earth, trees, seeds, plants, herbs, corn, grass, and all manner of beasts keep them in their order. All parts of the whole year, as winter, summer, months, nights, and days, continue in their order. All kinds of fishes in the sea, rivers, and waters, with all fountains, springs, yea, the seas themselves, keep their comely course and order. And man himself also, hath all his parts, both within and without, as soul, heart, mind, memory, under-standing, reason, speech withal, and singular corporal members of his body in a profitable, necessary, and pleasant order. Every degree of people in their vocation, calling, and office hath appointed to them their duty and order. Some are in high degree, some in low, some kings and princes, some inferiors and subjects, priests and laymen, masters and servants, fathers and children, hus-bands and wives, rich and poor, and everyone have need of other; so that in all things is to be lauded and praised the goodly order of God, without the which no house, no city, no commonwealth can continue and endure. For where there is no right order, there reigneth all abuse, carnal liberty, enormity, sin, and Babylonical confusion. Take away kings, princes, rulers, magistrates, judges, and such states of God’s order, no man shall ride or go by the highway unrobbed, no man shall sleep in his own house or bed unkilled, no man shall keep his wife, children, and possessions in quietness; all things shall be com-mon, and there must needs follow all mischief and utter destruction, both of souls, bodies, goods, and commonwealths.