The Viking Clan of Neill and House Neill

The Viking Clan of Neill (older texts dub them the “O’Neils”, but recent discoveries have found this to be either outdated or entirely false) originally hailed from the rugged wild-land outside of the great city of Makar that was founded on the very edge of the frozen borders of the Barony of Makar. Ancient Clan tales claim that before the period of seclusion that is found in historical record, the Clan enjoyed unmatched power and wealth, though no evidence has even been found to prove the truth of these claims. Early recorded history has shown that the Clan was originally quite small and secluded from the surrounding communities aside from brief interactions for trade or cultural exchanges. As they began to grow they gained a reputation for being skilled hunters, brewers, and metal workers; skills that eventually allowed them to achieve the wealth needed to become a true power in the region.

The first notable individual to make a mark on history beyond the region of Makar was Ender Neill, son of Erik Neill, who would earn an infamous reputation as a brutal and merciless executioner for the Dread Lord of the Barony of Makar and later as Dread Lord of Heorot. Through Ender, the Clan was able to amass enough wealth and influence to become the leading Clan in the Makar region and among the most powerful in the northern regions beyond. Using their wealth, the Clan established its own village on the outskirts of the Makarian forests while also maintaining property in the city itself that was comprised of a ducal estate and extensive underground vaults and brewing operations. These estates were maintained by Ender himself in life and by various agents of the Clan after he passed.

With the death of Ender Neill the Clan's influence waned. While they remained an influential family thanks to their stake in the local industries, Ender's sons never achieved the recognition their father did and the Clan chose to marry his only daughter to a prominent, but rather unremarkable family to secure better business connections in the city.

A second branch of Clan Neill was formed after the exile of Cid Neill, son of Kvasir Neill. Though there was initially some debate amongst historians on how to label this part of the Clan, it is likely most appropriate to call it “House Neill” since that is how it is referred to in most texts and records from the time when those members of the Neill family were active in the Far East. Cid Neill, the founder of House Neill went to great lengths to remove all ties to the Makarian Clan and, as such, much of the House’s history is difficult to tie back Makar.

Sons of the Neill Clan and House Neill 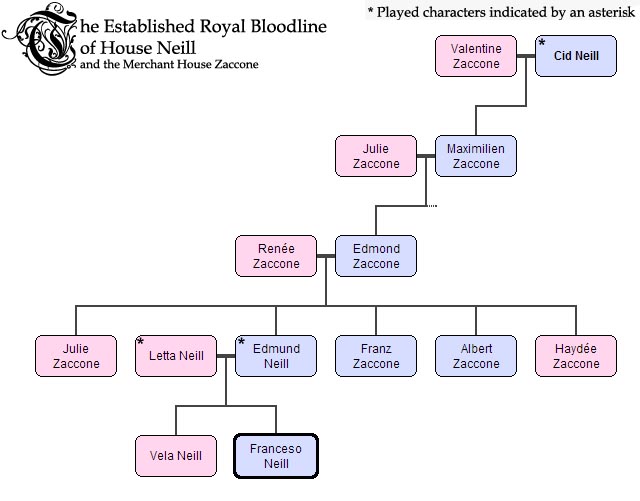