There are three currencies in the game: Gold, Silver, and Bonds. Most transactions will take place with the use of gold. Gold is used to recruit troops, repair equipment, train at the academy, and much more. There are a few ways to gain gold but the two most common ways are through collecting taxes and from looting. Silver is not used by nobles but is used by adventurers. Twelve silver is needed to equal a single gold. Bonds are pieces of paper that represent gold in a one-to-one ratio. Bonds can not be used to make purchases but they are the main method of sending currency to another person. This is done by visiting a bank, located in the capital and all cities. When taxes are distributed if you are not in your duchy then you will receive your tax income in the form of bonds instead of gold.

Each realm has its own bank, located in its capital with branches in any and all cities. Their primary use is to convert your bonds into gold, or vice versa. When taxes are distributed, if you are not in your duchy then you will receive your income in the form of bonds. Banks can also handle transfers of gold within the realm. Small transfers require the payment of a small fee. The only way to send gold to another realm is to travel to that realm's capital, where the main branch will happily take the gold and send bonds representing it to any troop leader of that realm. You can also send bonds to your family and add to your family's wealth. 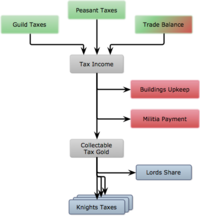 A flowchart demonstrating how taxes work.

Taxes are collected on a region by region basis once a week. However, it is possible for a realm's banker to call taxes early. How long until the next tax day can be found on the "Realms and Regions" page that is listed in the information menu. Tax revenue for a region is a collection of gold that the peasants pay to the local estate owners, the income the guild-houses and temples pay, and the trade balance for the region (this is the amount made/spent through automatic trading). Then the tax revenue is spent to maintain the local buildings and militia. The income that is left over is distributed to all estate owners in the region depending upon the size of their estate. For instance, if you have an estate worth 25% of the region then you will receive 25% of the tax income. The region lord will then take a share of the income from every estate owner in their region. If this tax rate is set to 10% then all knights will pay 10% of their tax income to the region lord. Dukes also get to set a tax rate. If they set the ducal tax rate to 10% then they will take 10% of the tax income of the region lords, and only the region lords, under their domain.

Every region produces and consumes a certain amount of food. The amount of food produced in a week with 100% production is displayed on the region information page. The amount of food produced in a region is also affected by the weather and the seasons. If a region doesn't have enough food then it will begin to starve. This results in lower morale and peasant death. If a region starves long enough then they will likely revolt and leave the realm. When food does finally arrive in a starving region it will not immediately have the starvation effects removed. The longer the region was starving, the longer it will take for the food to be distributed throughout the region. Conversely, when a region has more food than they need then the local population will be happier.

The only trade commodity, for now, is food. Trade is done on the marketplace where people can place sell or buy offers. Others can then go to the market and accept the buy/sell offer. Marketplaces are buildings that a region lord of a city, townsland, or stronghold can build. Not everyone can visit a marketplace; only traders, region lords, stewards, and bankers can visit a marketplace. The only time that trades can happen outside of the marketplace is when a region lord/their steward is in their own region. Region lords are able to place automatic sell offers. This automatically places a sell offer once the region has stored up a certain amount of food. For instance, an automatic sell offer for 100 bushels when the region has more than 200 bushels stored will result in a sell offer being placed once there is enough food to not go below 200. In this case that means the game will place 100 bushels for sell once there is 300 bushels stored. All gold earned through automatic sell offers will go into the trade balance of the region. The gold from the trade balance is distributed between all estates during tax time.

If a family has a wealth of more than 2000 gold then the family members will get the option to invest gold into a region. Investments increases the production of the region and can even put the number past 100%. If the production is raised past 100% then the production will lower back to normal over time. With an investment a region can quickly recover from the destruction of war. Investing also grants a family a single fame point. Investments don't only have a cost on your family's gold, it will also lower your realm's control on the region.