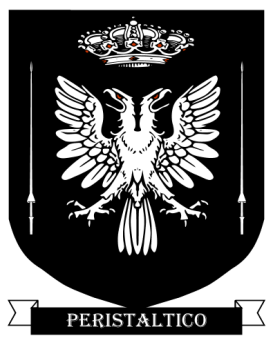 The Peristaltico family comes from Elmbar in the East Continent. A vast and productive farmland area bordering the eastern sea, Elmbar owes alliegance to Sirion since a long time, as a part of the duchy of Avamar. The Peristaltico were little and almost unknown vassals of the Count of Elmbar, owners of a respectable amount of cultivated land and living in an old and decadent manor surrounded by olive grows.
In time, fortune smiled upon them and the family grew rich enough to introduce its youngest heir into the higher nobility, sending him to serve the local Lord and hoping his deeds would have brought honor and fame to the name. Meristenzio began his service in Sirion, East Continent the 18th November of 2007.

After a while echoes of Meristenzio's rise reached a older relative, one that left the continent seeking fortune some years before. Fornanzio then began his career in Talerium, Atamara on the 15th January 2008. Rumors speak of many more young Peristaltico leaving their home seeking honor and glory, but if it ever happened, we lost record of their deeds. Names as Circenzio or Fidorenzio are seldomly pronounced in the halls of the family manor and someone suspects they fell into disgrace or worst

On the 18th April 2008 news arrived in Elmbar of a new Peristaltico, risen from the nobility of a far away realm, Morek in Dwilight. Few appear to know why a Peristaltico has been found there; it appears that a very old ancestor, one of the founders of the Elmbar's manor, travelled to Dwilight, perhaps exiled from his homeland, and kept the bloodline strong.

Years passed and the name of the Peristaltico began to be known; from a family interested in cultivation and trade generals and heroes were born. Their wealth increased and the old manor has been restored into a beautiful estate, large and richly decorated, reflecting the increased fame of its owners.
However, many believe it will only be a matter of time before this family will be forgotten, returning to his humble origins and falling into disgrace and poverty once again.

Active Members of the Family

Retired Members of the Family

* Relevant happenings on the day of the unknown fame point: Meristenzio improved jousting skill, without reaching 50% I think. Circenzio W. seriously wounded by undeads (happened in the past). Fornanzio sent 150 gold to the family wealth raising it to 1690. Meristenzio won a huge battle against Fontan as Marshal and General, against enemy Marshal and General but that happened in the past too, this the world report:
Huge Battle Fought (4 hours, 5 minutes ago) Rumours spread and tales are sung about a huge battle in Tabost: Sirion vs. Fontan Estimated strengths: 2230 men vs. 1740 men Sir Meristenzio Peristaltico, General of Sirion, Count of Lissambar, Marshal of the Army of Sirion is spotted wielding the Mighty Club of Battle. Brom Vats (Knight of Parm) is spotted wearing the Sacred Vest of the Vulcano. Uther Von Dingerlood, Baron of Sermbar is spotted wielding the Bloody Warhammer of Battle. Eric Redworm (Knight of Negev, Fontan) was captured by Sirion forces. Curteis Per (Knight of Al Amarah, Fontan) was captured by Sirion forces. Guthrinc Orcus (Knight of Krimml, Fontan) was captured by Sirion forces.

** Relevant happenings on the day of the other unknown fame point: Fornanzio surveyed administration in Ejar Puutl gaining one prestige point, raising his personal prestige to 23 and the family's one to 123. He could have improved his bureaucratic skill that was around 75% last time I checked. So it could be a point for reaching 80%. In addition starvation in Itorunt was resolved with him as banker of Ibladesh, not sure whether it could be meaningful. Circenzio W. fought his first huge battle winning. He gained 2 honor, reaching 36 and raising the family honor to 684, and 1 prestige. Improved his leadership skill without crossing any particular treshold. He then joined a tournament, starting a trip to it. Meristenzio and Bustoarsenzio were travelling and did not do anything particular that I can remember. Therefore the more probable guess is exceptional skill.

*** Relevant happenings for the third unknown fame point: Circenzio W. murdered 2 militiamen, perhaps raising his infiltration skill to 50% (he was around that amount). Fornanzio became a member (no longer a newcomer) of Ohnar West on FEI. Not sure whether this happened for real this day but could be, Fornanzio lived in other 4 realms so perhaps some kind of globetrotter fame point could have been awarded to him. Meristenzio spent 4 mentor points to gain 4 hours, reaching a total of 37 spent mentor points from 32. It was the first time he used mentor points to gain hours. So concluding the most probable reason is: exceptional infiltration skill, having been in 5 different realms, 35 mentor points spent, mentor points spent to gain hours.

**** This point arrived at the turnchange after Busto got an item that rose his prestige over 50. The moment he took the item I got one fame point immediately. The successive turnchange I got 2 more, one of which disappeared after a couple hours. The net result is 1 unknown point. The others chars did not do anything relevant that day, from what I could recall. Perhaps Meristenzio having seen many students as mentors, just the only thing I can think about.