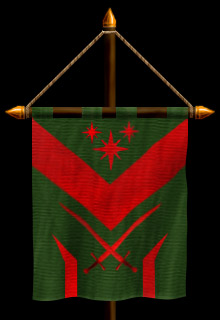 From the Bloodstars We Are Morek,
To the Holy Lands of Them We Advance.

The successor of the original realm of Morek and originally called Xinhai, Morek Empire is a theocracy of Sanguis Astroism centered on Donghaiwei.

After the death of Grandmaster Deverka Cryfdwr, the founder of Morek, in the sixth year of Dwilight, the cultural gaps between the original Morek and the Dalian additions grew greater. Furthermore, growth was impeded by the large bureaucracy needed to keep together the largest realm on Dwilight.

Near the end of the seventh year, Duchess Anabellium West, in accord with the nobles of her duchy, seceded from Morek to found the realm of Xinhai.

The most important success of Xinhai was the victory against Aquilegia, Libero Empire and the Raivan Empire. The latter was completely conquered by Xinhai and this eventually lead to the expansion into the Aegir and Muspelheim Duchy. After the war, Xinhai was reformed as Morek Empire (circa 11 YD), to stress the multi-ducal structure of the realm and the heritage such realm bears to the original Morek.

In the Summer of 14YD, the then Duchess of Aegir, Lady Allison Kabrinski, succeeded her Duchy due to colonial disputes, and briefly formed the realm of Entai. Not long afterwards, however, Caerwyn declared war on Morek's ally Astrum, and an agreement between Entai and the Morek Empire was soon reached. In the Fall of 14YD, Aegir was taken back, and the Morek Empire was once again united.

The Morek Empire currently marches against the heathen realms in aid of Astrum and, ultimately, in defence of the faith.

In the Spring of 15 YD, Duke Francois de Leon and Bowie Ironsides founded the Convocation of the Sword in Donghaiwei to become the premiere sport of the Empire.

Morek Empire is a theocracy of Sanguis Astroism, dedicated to the Bloodstars. The townsland of Caiyun, in the middle of Morekian lands is a region that is bequeathed to the Church to serve as a residence to the Light of the Austere Star.

The Grandmaster is the paramount permanent ruler of Xinhai and he has control over the secular affairs of the realm. The High Inquisitor is nominated by the Most Holy Prophet, who resides in Corsanctum, to safeguard the faith in Morek Empire. It is the most elevate position belonging both to church and realm. The Ordermarshall and the Coffermaster are elected positions. The Coffermaster must be an unlanded noble.

The fighting men of Morek Empire are organized into knightly orders and led by Order Marshals. The military doctrine of the Morek Empire is outlined here.

Morek Empire fought a war against Thulsoma, from 10 YD to 13 YD, to extinguish the heathen faith known as Hrēdmōnath and to avenge the execution of Sir Gilles Barak, one of Morek's nobles, by hand of the Mistress of Torture of Thulsoma. This war led to the conquest of Averoth, an ally of Thulsoma, which concluded after the Siege of Valkyrja in 14 YD.

Meanwhile, to the west, we enjoy peaceful relations with the ever neutral Corsanctum, which is the Holy State of Sanguis Astroism. We are allied to Astrum, currently the greatest of Sanguis Astroism's theocracies, dominating the Upper Occidens, who provided us with valuable aid in the "Astromancy War", as named by Dean Ironsides. The Empire aided Astrum in its war against Caerwyn from 14 YD until Caerwyn's collapse and defeat in 16 YD.

To our south, we were confederated with the realm of Aquilegia until its eventual demise. The Empire still retains a claim to Flowrestown and one day seeks to recolonize the City of Flowers. Further south, we have recently signed a treaty with Solaria, which is currently involved in a civil war with our ally Pian en Luries.