The Crescent Family maybe pretty boastful about their bloodline but they're most honorable. Eliwood was born first and then Lyndis but their mother died in childbirth and Hector was in pain and could not dare forget his beloved wife and was then enraged with grieve and sadness. Hector couldn't live anymore and therefore left his Crescent family and went to war and was never heard from again.

Eliwood and Lyndis were without parents but were still of the noble blood and someone had to take care of them - Oswin. Oswin was Hector's Half-brother and was skilled with the sword and lance and taught Eliwood and Lyndis to use the sword. They were blessed with great sword-fighting skills for their age and would wish to become great warriors one day. when they were both at the age of 15 and Oswin had died of a heart disease which was unexpected as Oswin was very healthy and active. 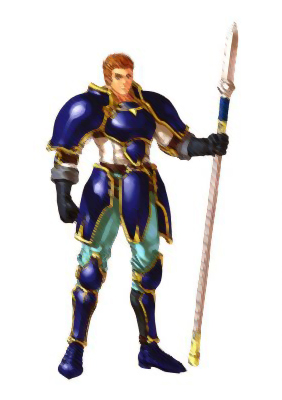 He's the Father of Lyndis and Eliwood but don't let his appearance fool you, he is a strong willed man with amazing Spear fighting skills. Hector grew up in Soliferum with his half-brother, Oswin. His Father, Galvas Crescent was a great Warrior, unlike himself, he was an infamous legend. Hector had to hide his sensitive side because Galvas taught him to never show his soft side or else you'll lose your focus in battle and show signs of weakness. Hector was a very Honorable man and hoped that his Son, Eliwood, would also be as great as Hector or even better.