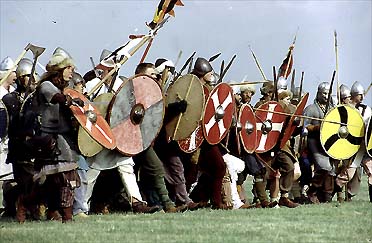 The active members of the Blackstream family at this date are Byrthnoth and Garrick, young men who have much to live up to if they are to properly honour their family.

The Battle of Maldon

A Verse Translation by Douglas B. Killings [1]

Then he ordered a warrior each horse be let free,

giving thought to deeds of arms and to steadfast courage.

Then it was that Offa's kinsman first perceived,

that the Earl would not endure cowardice,

for he let then from his hand flee his beloved

falcon towards the woods and there to battle went forth.

By this a man might understand that this youth would not

prove soft at the coming battle, when he takes up arms.

his lord to fight with; and so he advanced forward

his spear to battle. He had a dauntless spirit

as long as he with hands might be able to grasp

shield and broad sword: the vow he would carry out

that he had made before his lord saying he would fight.

Then Byrhtnoth marshalled his soldiers,

riding and instructing, directing his warriors

and ordering that their shields properly stand firm

with steady hands and be not afraid.

Then when he beheld that people in suitable array,

he dismounted amid his people, where he was most pleased to be,

there amid his retainers knowing their devotion.