April Fools is a tradition of BattleMaster as well, and every year at least some of the players fall for it...

Unfortunately, not all april fools mails have survived. If by some chance you are in posession of an older one, please add it.

Please For the coming years, please don't spoil the fun. If you don't fall for it, then don't tip of the others who do, ok? That includes not updating this page until April 2nd.

What you need to know to appreciate this one: April 1st was on sunday. Nothing happened on sunday. Well, at least not on the first one...

For a couple of hours after this last announcement, people who logged in found themselves presented with Tom's account, or more precisely, a static page which you can see here. All links on that fake page lead to an April Fools message.

This April Fools joke was not run on April 1st, so does it count? One could argue, because due to the "rollback" (which was, of course, a fake) it "was sunday". So the joke is valid because of the joke. Geeks will (hopefully) appreciate the recursiveness.

April Fool's pranks are a beloved BattleMaster tradition. Since we can't seriously expect our players to fall for pranks anymore after 8+ years, we've decided to incorporate the pranks into the game. It turns out that this does, in fact, have a historic base, e.g.:

It is said that on April 1st a 16 year old girl (name unknown) asked Heinrich IV., King of France (1589-1610), who was known for fancying young ladies, for a secret rendevous in a discrete love castle. As Heinrich showed up for the tete-a-tete, he was greeted by the entire court, headed by his wife Maria von Medici, who welcomed him to the "Fool's Ball".

On this page, you can play pranks on other characters in your realm. Of course the game will keep track of who pranked and who was pranked, and you can only prank those who did neither so far. So you have to be quick and inventive, since you must be the first to use a particular prank on a particular person, and you must use it before your target does a prank himself.

You can gain small amounts of honour or even prestige if you prank enough characters in creative ways. Also, pranking someone else first is the best way to prevent pranks being played on you (see above).

Pick your prank type below, then on the next pages you will design the prank details and target:

For the 2010 April Fool's, the front page was replaced with a page (shown on the left) alleging the domain was shut down by the USPTO until the resolution of a trademark dispute.

By clicking the contact link, you could play the game as usual.

There was also a smaller joke on the testing islands where parts of the combat texts were replaced by easter references. 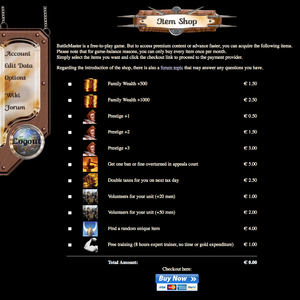 A link advertising the "BattleMaster Item Shop" was included in the user/family page. It showed the page shown in the image, with functioning selections and totals, might still be up at the original link.

The "item shop" took up the current trend towards the 2006 business model "Fremium" and appeared to allow players to buy in-game advantages like prestige, additional troops, etc. for real-world money.

The joke was obvious to most people who've known the game for a while, but it quickly sparked two forum topics with angry outrage. Of course, getting people all upset has never stopped Tom from playing an April Fool's before.

Dark portals opened up on all game worlds and sons of Overlord (who had already been killed during the ongoing 5th Invasion on Beluaterra) appeared as rulers of the Netherworld realm, declaring war on all human realms (but, on Dwilight, not on the Zuma).

The portals were visible on the dynamic map for the entire day (click on the images for a larger view):

Completely unrelated, but with perfect timing, actual player activities had led to an in-game event on Dwilight (you can see the dark cloud over the inner sea in the map above).

In addition to the IC prank, the wiki, forum and account pages were also "taken over" by the Netherworld, the BM logo replaced with the same Netherworld portal image, the forum board renamed from "BattleMaster" to "Netherworld Slave Islands", the account/family page renamed from "Player Page" to "Slave Register", and so on.

A video was posted to the login page, originally with some fake tags indicating that it was not yet meant to be shown (and would thus be a "leak"). The video explains that there is a full voice-interface for the game in the works, together with a (doctored) demo allegedly showing it running on an iPhone. The video is on YouTube:

The fake announcement was made that you could create a Daimon Adventurer with special powers.

BattleMaster Adventures, with working demo downloads and a sweet video, due to the declining popularity of the game was kind of a dud.

After collecting much more data upon message activity throughout BattleMaster over the last few months, Anaris and I have both spent the weekend analyzing the various metrics and considering solutions to boost the interaction between players based on the lessons learned from the data.

A key insight we've observed is that messages of fewer characters tends to generate many more replies by a wider group of players, including those who don't often write letters or roleplays, while extremely long messages tend to only generate replies from a miniscule sliver of the playerbase. In some realms, long messages get no replies at all while short, concise messages do get a few replies. Another group in which a noticeable difference was observed was new players. Of grave concern, characters less than a month old replied to a long letter less than 5% of the time while replying to shorter letters an average minimum of 23% of the time, sometimes as high as 39% in certain realms, and as high as 68% in Perdan.

It is for this reason that the first change we are immediately implementing to messages to boost interaction is reducing the maximum character limit of all messages to only 280 characters. We understand that this is a huge change from a 5,000 character limit, but we believe it is important to establish firmly the new direction of the game being short, concise messages. We suspect this may also have the advantage of encouraging more mobile-friendly play in our on-the-go modern world, without having the burden of reading and replying to lengthy messages via a mobile interface. Please, give it a day to experience before giving us your much-appreciated feedback on the forum or in discord.

The last day or so has been such a resounding success for the new reduced character limits that we will now be transitioning BattleMaster to be played exclusively on Twitter. On a larger platform, we will be able to attract many more players and grow once more. In an unrelated note, happy April Fool's Day. ;)