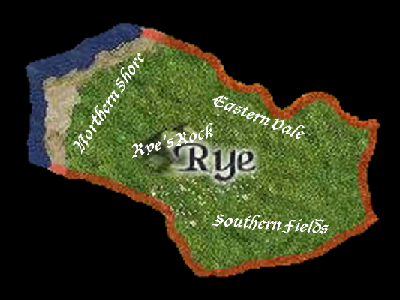 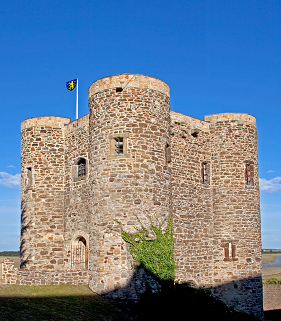 The inner fort and residence of the Shell Keep set atop Rye's Rock. It flies the arms of Count Philip De Broase

One of the older Springdale regions, Rye has subsequently been part of Springdale, Morek, and Libero Empire, and presently flies the banner of the Kingdom Of Arnor. One of the region's main features is Rye's Rock, a large hill ringed with several smaller mounds, which is visible for miles around. Various local legends exist to explain the large raised formation in the middle of the otherwise flat Vale of Rye.

The commanding position of The Rock has traditionally housed the Manor of the local Lord although in 1016 a new Shell Keep was raised by Count Philip De Broase, suitable for a garrison of forty men and the lord's household and retinue, and the former Manor was abandoned. In the vicinity can be found a temple of the Order of The Storm Maid.

It is said the region is named after the wild Rye crops which once populated the grasslands. When Dwilight was settled this natural resource was domesticated and farmed extensively and continues to be the base supply of food for the region, although the land is also fertile enough for all manner of other vegetables and root produce to sustain the populace. Rye's rye is traded widely and the region is claimed to be the source of the best quality crop in all the known world. There is also a variety of tertiary industries in the region which take advantage of this product; flour mills, bakeries and distilleries are frequently found in the small villages between the arable farms. There are also a number of small livestock homesteads which benefit greatly from the supply of rye fodder.

The mounds around The Rock contain a network of ancient barrows and deeper tunnels that lead further underground. Scholars are unsure as to the exact date these barrows were erected but it is generally accepted that they pre-date the realm of Old Springdale and are a remnant of Dwilight's antiquity. Subsequently, the local religious and political significance of The Rock is clear even if the exact history remains unknown.