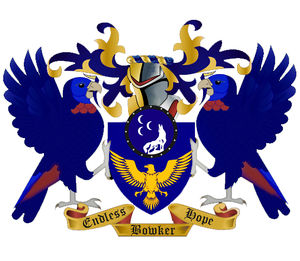 Coming from a distant land, the Bowker family acquired its first plot of land on the East Continent, in Pedrera, in the Sultanate of Asena. Traders by tradition, having lost much of its wealth, they settled in Asena to try to start a new life. They gradually were adapted to local culture and began to follow the religion of the Sultanate. His descendants, created amid the sons of the sultan and viziers were well educated and became part of the sultanate as if they had always lived there until the day Asena was brutally attacked and beaten.

(First Family was Avis if I am not wrong http://battlemaster.org/UserDetails.php?ID=20935)

Mattias, the loyal. At the beginning of the most violent war, Mattias, brother of Myrnia, son of Morritz Bowker and Soraya Mahyon, direct heir of the original immigrants, started his adventure in a ship with uncertain fate, vowing to return one day to find his beloved sister. Arriving in Dwillight, he found in Pian-en-Luries the place that has become his home, swearing loyalty to Queen Alanna Anaris and Duke Amaury Capet.

Cataryna, the leader. Maurice, brother of Morritz Bowker was married to Amelia Sophia Myrtle, with whom he had two daughters: Cataryna and Luarin. Cataryna, restless and rebellious, also managed to get into a ship with destination to the Far East and started his military career in the Principality of Zonaza being appointed Countess of Hutael in a short period. Perfectionist and eager to learn everything, she made many mistakes while trying to do what she believed is the right thing. One day, tired of the calm of the place, he enlisted in another vessel that led her to Beluaterra where she decided to make a new life in Thalmarkin where she become a follower of The Order of The Golden Feather.

Luarin, the warrior. Very attached to her cousin Myrnia, more even than to her sister, fought in Asena until the end, only leaving when Myrnia also left. She left in Sirion her daughter Sophia, born in prison, fruit of a secret love with a noble of Asena that was killed in a battle. Believing that she would be protected by the nobles of Sirion, she traveled to meet her sister Cataryna where she fought against the Overlord until it was destroyed along with their army and sons. After the end of the war she returned to East Continent to find her daughter and start the search with Turgon Noldorin of Nivemus, because he had helped to hide her daughter. Getting to know that Sophia was still in Sirion, she travelled there and took a estate in this Realm in order to be closer to her daughter.

Myrnia, the fighter. The oldest of the four cousins and survivors of the Bowker Family, fought at Asena till the end. As Marchioness of Pucallpa and Judge, helped those who wanted to leave, writing letter after letter asking for protection for her people. She started her travel to a new Realm being brought back to prison at least four times before she could finally move away from the enemy, the Realm of Obsidian Islands, and travelled for many days till she could reach Eponllyn where the good Queen Siana offered protection to the people of the extinguished Sultanate of Asena. There, at the side of Viseslav and Dominik Stublic, Fenris Magdalen and her good friend, John II Leon, slowly she became someone in whom Queen Siana could trust and was appointed Margravine of Ibladesh, the richest city in all Continent. Although dreaming about revenge and dreaming about rebuilding the Sultanate, she put all her efforts on the new Realm.

Daugther of Luarin. Lived and died in East Continent where she gave birth to Irina.

Daughter of Myrnia, borned at Ibladesh before being defeated and expulsed by the ice and the war. Gave birth to Caryssa at Oligarch where she lived, till Caryssa was old enough to be part of a army.

Caryssa Granddaughter of Myrnia, borned at Oligarch where the Bowkers moved in to meet the new child and to start a new life. Moved to Al Arab to be closer to the White City, on which she had heard so many stories, so many times. She have a secret wish to bring Myrnia back there some day.

Grandaughter of Luarin. Moved to Dwillight where she fall in love with Staedtler.

Ariana, the adventurer, daughter of Mattias.

Oliver, the son of Cataryna and Red Marlboro.

Luccas, the cousin of Myrnia.