Aetheris Pyrism is a set of practices and beliefs that guides its practitioners through the spiritual and mortal worlds. It aims to the improvement of one's self through the attunement with the divine.

Aetheris Pyrism deals with two levels of worship of four different orders of beings. It works on a lower level, in private ceremonies and shrines built in the practitioners' houses, and on a higher level, in public temples and festivals.

The objects of worship are, in a lower scale, the ancestors and the lower spirits of the world. In an intermediary level, the saints are object of veneration. In the top of the spiritual hierarchy, object of the highest devotion, are the Gods.

Since Aetheris Pyrism deals with many different notions and terms, usually subjective or otherwise complex, a list of the terms and their meanings makes itself very useful for any apprentice of the religion, and specially for the players who would rather not have to learn themselves as much as their characters are roleplayed to know. 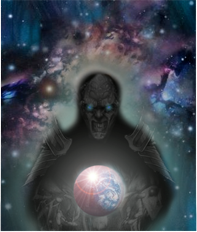 An artist's depiction of the god Nalucht using the essence of the all gods to create the earth.

Katrina is not the embodiement of order, nor Korroth is the essence of Chaos. Aetheris Pyrism believes that those two extremes end up meeting in the nothingness of Ukhra. Katrina works as the ideal of the right measure of order and serenity, while Korroth represents a chaotic and glorious life. They are not the only possible paths, and probably not the best for everyone. Other Gods incarnate other lifestyles and paths destined for other people. As long as these people manage to successfully attune themselves with their inner Godly flamme, and live a life in harmony with them, they should be blessed.

Thought to live in the stars of the firmament, the Higher Spirits are the intermediaries of the Gods and the mortals. Though their intentions and purposes are hard for mortals to decipher, communication with them is possible through usually cryptic or otherwise unclear visions, dreams and symbolic messages. Normally only Priests and otherwise very spiritually enlightened ones try to contact them through prayer. The usual method is by silently praying after checking the presence of stars in the firmament, to confirm a Higher Spirit will be present to hear the prayers.

The cursed one's names should not be pronounced out loud but in very special circumstances. Their names said aloud, or even written, provokes fear in any faithful follower of Aetheris Pyrism, who only reference them only by their epithets. Less devout commoners reference them purposely mispronouncing their names, usually to scare children with their image.

I believe in the holy flames, which purify living and dead.

I honor my ancestors, who give me courage and strength.

I respect the spirits, who influence tides and seasons.

I worship the Gods, who rule heaven and earth.

I renounce the impurity, which corrupts mind and body.

I reject the underlords, who consume flesh and soul.

Word of the Prophet

Extract of a private letter between the Fire Prophet and a noble who then converted to Aetheris Pyrism.

The divine truth is composed by what is considered canonical by the church. Such concepts tend to remain unchanged through the years and be strictly followed, though possibly being subject of different interpretations.

The divine path is made of less strict rules and truths, but more of concepts that cemented themselves over the years, becoming established religious practices. Includes religious ceremonies and rituals performed by priests and laymen.

The divine history taught in the temples and preachings. It is a human narrative of the translated message of the Gods, as gathered through the divine inspiration and messages of the Higher Spirits.

The advanced study of all the divine, spiritual, transcendent and even the unholy. Few have the knowledge and enlightenment to trail this path, so it is usually reserved by the most experienced seniors of the religion and a few young prodigies.

Aetheris Pyrism consists of a variety of cults. Excepting the Cult of Fire, each cult is dedicated to a specific God or Goddes of Aetheris Pyrism.

Places of worship for the followers of Aetheris Pyrism. List of their locations and the material structures commonly found in them.

Roles of each rank in the ecclesiastical hierarchy.

Religiously-related RPs and letters by nobles.