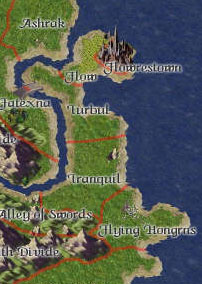 The Flow peninsula is mainly focused around the areas of Flowrestown, Flow, Turbul, and Tranquil. Before the arrival of the Easterners, and even during the changing of Eastern Dwilight, the native Dwili had inhabited the peninsula. By outward appearances, the Dwili inhabiting the coastal city, the towns, and the farms, resemble the Dongese of the regions north, now considered the Donghaiwei duchy of the Morek Empire. However, due to isolation on the peninsula, and minimal contact for several generations, the culture of the Flow Peninsula is quite dissimilar to that of the Dwili elsewhere.

Unlike other coastal cities along the east coast of Dwilight, Flowrestown was relatively closed to any sort of sea traffic. The fishing industry was sufficient, both in the city and the towns, and in the rural villages along the coast. The soil was also fertile, and food crops were often enough for subsistence in the Dwili-ruled peninsula. But the long period of isolation from other groups of peoples had allowed the Flow Dwili to define their own culture, based on their proximity to the sea, and based on the many varieties of flowers that grew all year in each season.

Adequate resources, and lack of warfare led the Flow Dwili to become amiable. They focused more on crafts, fine arts, horticulture, and competitive sports. Many inhabitants of rural villages and less densely populated towns dedicated large plots of land for the cultivation of select species of seasonal flowers. Coastal villages and towns held fishing contests, and due to the size of some marine fish, such events were often exciting to participate in as well as to watch. In the more densely populated towns of Flow, usually those in close proximity to the city of Flowrestown, some townsfolk developed a sport by balancing on a long thin board of wood that is streamlined to float and travel along a wave. Major tournaments were recorded among the native Dwili of Flowrestown, that still exist today, describing such events where hundreds of participants would "surf" at the beaches of Flowrestown to show off moves.

The government of the regions were not heavily centralized, and Flowrestown was more of an industrial and commercial city without any major governmental buildings. This changed when Easterner colonists from the northern parts of the converted Donghaiwei duchy moved south into the Flow peninsula. The natives did not reject the colonists, and accepted the new government and religion without any resistance. However the winter was harsher than usual and the populace of Flowrestown and Flow suffered starvation, which they blamed on the colonists. Efforts were made to calm the people, food was acquired, repairs were made, and the first Asterion Garret Artemesia, along with the first duke of Flowrestown Vesuvis Adriddae, ordered the construction of the Palace of the Stars in Flowrestown, both as a show of the new government's presence, and as a building where some people could find emergency food and provisions, as per the Asterion's orders during the building of the palace, he opened sections and in fact dedicated one part to the reception of the public.

One defining feature of the Flow peninsula is the seasonal flower festivals held throughout the villages, towns, and city. The first colonists arrived in the middle of the winter festival, and were welcomed by the sight of winter flowers and evergreens. As the natives were friendly, the government of Aquilegia that was the first foreign government established on the peninsula, allowed the natives to remain, and had mostly integrated the peoples.

An interesting geographical feature about the peninsula is that the city of Flowrestown and the townsland of Flow are bordered by only one region, Turbul, which is not seen anywhere else on Dwilight.