Flowrestown is a magnificent city that is set on the far eastern peninsula of Dwilight. Its location makes the only entry point to the city and its surrounding townsland Flow the more rural area of Turbul. This unique geographical location, that is seen nowhere else on Dwilight, makes Flowrestown a very well-defended city, and very isolated. Travel from both the west through Fatexna and the south through Tranquil must first converge into Turbul before any further travel can be made. Flowrestown used to be the capital of the lost realm of Aquilegia, during which existence several festivals became traditional in the city.

On a side street near the centre of the city sits a small memorial statue dedicated to Lord Rathan Himoura. It was dedicated to him by Lord Bowie Ironsides after his execution in the Winter of 9YD. It is a small statue of a snake leaping into the air to catch a bird, and on the pedestal is a plaque that reads: “In memorial of Lord Rathan Himoura. Executed in D’Hara, Winter of 9 YD.”

The city itself is very vibrant, as the inhabitants physically resemble the Dongese, though culturally they are different from those who once inhabited Morek. The Flow natives are more amiable, and they are very festive. As the name of Flowrestown would imply, seasonal flower festivals are regular and anticipated events. In the spring, the first blooms after the winter thaw are collected and used as decorations throughout the city. In the summer, a myriad of colors span the streets, painting the summer vivid. In the autumn harvest season, the festival occurs at the last fall harvest, when beer is consumed most heavily in celebration of a good harvest to pass by the winter. In winter, the hardiest of the cold blooms are collected and used in a tradition of gift-giving. Wreaths and bouquets of such winterblooms are used both as gifts and as ornaments for this mid-winter holiday that raises morale through the cold winter.

Flowrestown sits atop a quarry where many different metal ores can be mined. This provides much convenience for the smiths who work in the city, as they do not have to wait for imports from the western mountains.

As a coastal city, Flowrestown also has many beautiful beaches. Like the flower festivals, the city has some fishing contests in each season, to see who can catch the biggest seasonal fish. There is also a sport where people balance atop long wooden boards and try to ride waves of water. It looks exciting, but one must wonder how prudent it would be to face high tide with only a wooden board.

Despite their festivity, the people of Flowrestown are also very economical. The children are taught from a young age the meaning of hard work and labor. Strong work ethics are ingrained into the children by their parents, and are encouraged by their neighbors. Small communities within the city are common place, and the members of the sub-communities will gladly help each other. Fisheries are the most usual form of food production in Flowrestown, with many fishermen operating in the harbors. Metalworkers work on various small ornaments or symbols that are used to decorate houses. Figures of fish like animals are a popular manufactured metal item.

The Flowrestown architects take pride in their buildings. Having the vast stone quarries to the south-west, and wooded land to the north-west, Flowrestown builders are well stocked with assorted materials to construct housing. Despite the amount of stone that is brought in, the material is reserved only for the nobility and very rich freeholders, as well as used in public buildings. These stone buildings are made from the most artistic builders, who carefully carve elaborate images into pillars, or into blocks. Wood, straw and mud are more readily available to the commoners. These buildings are situated more on the outskirts of the city, usually on the shore, or deep inland. The huts are built quickly, but the construction is still careful and the huts are made to look as flamboyant as possible. However, these houses are the ones mostly destroyed by powerful storms from the sea, and there is little to prevent it. Thus, the common houses are cheaply built as possible.

Much of the ancient history of Flowrestown remains in the libraries of Flowrestown. Before Flowrestown actually became a city, it was a community of fishermen. The people were a tributary state of the warlike clans of the mountains to the west. They lived under threat of the people of the divide giving tribute in manufacture beautiful items, and many flowers. In time, the Flowrestown people grew tired of the raids of the mountain people and took arms. The first army was led by Curshixa the Gallant. Curshixa was part Rakjak(a people from the north who were also very militaristic), and he was tactical. He swiftly made defenses for his people, and oppressed any mountaineers in Flowrestown. Curshixa then rallied the Flowrestown people to a war to eliminate the mountain people to prevent the threat of raids from happening. The great host marched to the people of the mountains and fought until there was few of the raiders left. Curshixa came back victorious, however, his army was decimated. Those that returned to Flowrestown were hailed as heroes, and Curshixa and his men ascended to a ruling class that dominated the Flowrestown people.

In the times after, a city was built by Curshixa's son, Curshixa II, the builder. Flowrestown grew to be very large, and the dynasty of Curshixa ruled long. Warriors spawned from Flowrestown and by Curshixa V, Flowrestown had come to exact food tribute from surrounding regions to feed the growing city. But the people still celebrated, and became rich in festivities and conquest.

As fast as Flowrestown became great, it was beginning to deteriorate. The Curshixas' withheld its soldiers to promote trade instead. Soon, it lost contact with most of its lands, and only traveled to buy food and sell goods. But the people were happy, as there were no raiders, but there were plenty of holidays.

By the time of the Easterners arrival, the people of Flowrestown governed themselves and the Curshixas were only in name. The last dieing without a son and naming his courtier heir. A council of commoners were usually called to make decisions in the city, and a small militia was usually kept to fend against monsters.

When Aquilegia was formed and the city made its capital, there were no violent uprisings against the government. As such, the traditions of the natives will be preserved, as they are rather fun and do not affect the affairs of the state.

Flowrestown is situated at the coast, and borders the river that originates from the Divide Mountains. It is quite temperate, and its nearly constant temperatures allows plants to prosper around the peninsula, if enough precipitation falls. 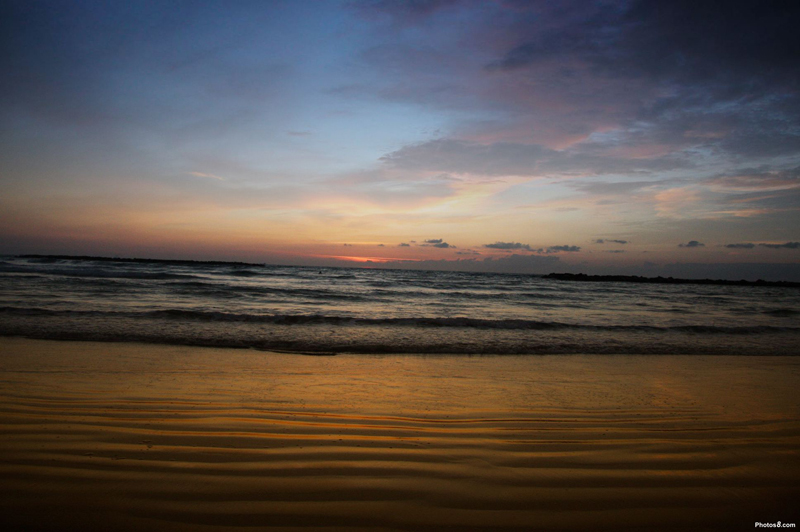 A sunset along the beaches of Flowrestown.

Oremnas Curshixa was the first king of Chersonis, the ancient realm formed when the fishing communities of the blossoming peninsula rebelled and overthrew the government set up by the Three Mountains' Sword Guild. His son Kaios Curshixa, later given the name and honorific "Sostello the Builder", initiated the construction of the wall that is the present-day inner wall. The Curshixa dynasty of five generations all ruled from Flowrestown as the Chersonian capital.

Post-Curshixa, there was a period of self-rule by the populace. Few notable commoners were found during this period, but the drunken poet Mureto Hamrod supposedly lived the majority of his life in the various taverns of Flowrestown.