Duke Talius of Ashforth declared the creation of a new realm called Nivemus on October 27, 2011. Nivemus seceded from Sirion with one city (Ashforth) and one rural region (Dale). When it seceded, the realm had a total of 14 nobles. Duke Talius became the ruler of this new realm created by Sirion and called himself Kronogos.

Nivemus was a mixture of nobles from Sirion, many of whom had formerly been a part of the long dead Old Rancagua, and other aspiring nobles from across the continent. Although the founding nobles came from across the Eastern Continent to create Nivemus, the founders had a deep respect for the tribes that already lived in the lands they would soon conquer. These tribes were strong in both heart and body, and the founders knew they had to unify these tribes to create a stable realm.

With this in mind, the founders created a strong monarchial based government with the specific purpose to unify the tribes of the North under one banner. They even used the local names of 'King'(Kronogos), 'General'(Stratarchos), 'Judge'(Legodos), and 'Banker'(Arithogon) for the government titles. 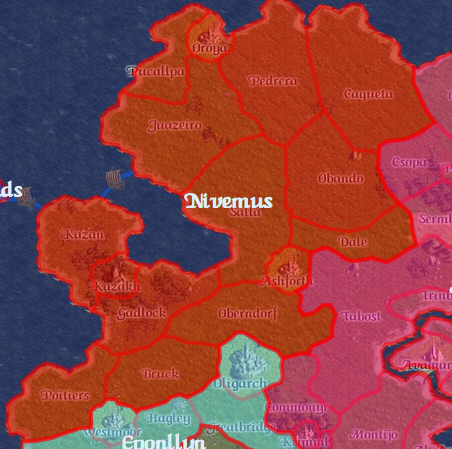 The Army of Nivemus- The main army responsible for any conflicts and fighting enemies abroad. When not involved in a war it trains and helps with local monster threats. Marshal Malakai Wolf and Vice Marshal Bavol Gottfried lead it.

The High Guard- A smaller army composed of young nobles and courtiers. It's main task is the maintenance of the lands of Nivemus and eliminating pests such as monsters. It is headed by Marshal Andrew Pucker who maintains the regular 'Pest Report' which reports on the various monsters pests within and near Nivemus.

The founder and first Kronogos of Nivemus. Talius had a strong bond with the lands of the Northern Kingdom having been a King of Old Rancagua before spending time in both Fontan and Sirion. Having created the state with only two regions, Kronogos Talius set about the subjugation of the North claiming the regions of Salta, Caqueta, Juaziero, Oberndorf, Obando, Pucallpa, Pedrera and the once great city of Oroya. With the able support of an active nobility his works to establish control and then progress within the regions was swift. As Nivemus grew and attracted a greater range of nobility, a group emerged known as 'the Saxons'. These nobles eventually represented around a third of the realms nobility and worked hard to create discord between the crown and the nobility. It was the last act of Kronogos Talius reign to expel this group from Nivemus and embittered by the internal conflict he stepped down from his throne.

Neji was the nominated successor to Kronogos Talius having served the realm as both Judge and Marshal for some considerable time. He was elected unopposed to the throne. Kronogos Neji's reign saw the prospering of the regions through a substantial and sustained peace. He was a willful man with high ambitions that Nivemus could expand to encompass the great city of Oligarch. This ambition was hotly disputed by many senior figures within the realm, but the Kronogos was steadfast in his resolve that his plan had merit. To this end he devised a confederation of the Northern states, hoping to coax the Obsidian Isles into a coalition with Nivemus and Sirion, from which position he planned to make inroads for all three states into the lands of Westmoor. In the end his naivete and headstrong pursuit of Oligarch was to lead Nivemus into her darkest days, betrayed by the Obsidian Islands, Nivemus came under attack from Westmoor, Perdan and the Obsidian Islands themselves. In the darkest hour the Kronogos simply left his crown upon his empty throne and was not seen again.

Following the departure of Kronogos Neji, both the banker and Marshal of the realm, Hergoervik Draekarne and Vessol Mithrdates challenged for the honor of becoming the next Kronogos. Unexpectedly and with a fiery tummult of rhetoric, Hergoervik was elected to the crown. The early days of his reign saw him try to centralize power to himself, but his own council moved to govern beyond his reach. In essence the realm was governed by the Kronogos circle for 3 of the 4 weeks of his reign and he was summarily removed from office.

Vessol Mithridates took over the throne without opposition after Kronogos Hergeorvik and his silent supporters were bloodlessly deposed. Kronogos Vessol took over the throne of Nivemus when Nivemus was down to a handful of regions and it's two cities which soon faced starvation if they did not act soon. With the assistance of those nobles who remained loyal to Nivemus, the rogue regions formally of Nivemus were reclaimed from rogue beasts and rebuilt. Always a soldier first, Kronogos Vessol was often seen leading his massive cavalry unit in a front line charge in battles. A few months after Nivemus recovered, Nivemus launched an attack on the Obsidian Islands in retaliation for their previous betrayal. Nivemus at first was successful in every battle against the Obsidian Islands, but as time went on the war dissolved into a stalemate. Eventually Kronogos Vessol, Duke Monte Cristo, and Emperor Epoch of the Obsidian Islands brokered a treaty that granted Gadlock to Nivemus and the rest of the Omsk Peninsula to the Obsidian Islands. Shortly after brokering this peace agreement, Kronogos Vessol announced his abdication of the throne, citing that a new era for Nivemus was beginning and that he believed a new ruler was needed.

Catherine followed Vessol to the throne upon the turn of a coin as she polled equally with her friend and rival Malakai Wolf. The early part of her rule saw the arrival of a great ice flow covering the southernmost reaches of the continent. The main sufferers of this event proved to be Eponllyn whose lands became swamped in the ice and tormented by the beasts that traveled there-on. In order to survive the realm moved by the grace of Sirion to the great city of Oligarch. Thereafter there was a tense political situation that developed between north and south with the realm of Westmoor feeling particularly uneasy at the presence of the nation of Eponllyn on their borders. For her part Catherine welcomed the displaced realm and joined in an alliance that they may be protected while they sought the opportunities to survive in the new world. Feeling betrayed by Obsidian Islands acts in participating on Perdan side in the Great War against Nivemus, Sirion, Eponllyn, Catherine found an opportunity to retake Omsk Peninsula(Kazakh city, Gadlock, Kazan) from Obsidian Islanders. It was a good war and Nivemus won, a peace treaty is signed.

After his good friend Lady Catherine left Nivemus along with many Nivemus nobles to join her husband realm, First Oligarch which is formed from Sirion, Brock has unenviable task to rebuild Nivemus. Army strength is significantly reduced, many vacant lordships to be filled up and uncertain time lies ahead of Nivemus. Sharing a good relationship with Emperor Malius, the latest of Obsidian Islanders Ruler, Brock diplomacy skill saw him managed to gain Duchy of Kalmar(Kalmar city, Stora, Alvaret) without much bloodshed. If the previous Kronagos/Kronogos before Brock fought in war and gain a duchy such as Lady Catherine herself, Brock has gained a duchy himself for Nivemus through diplomacy. Brock has always tried to live up to the previous Kronagos legacy, Lady Catherine, his friend who gained a duchy through war, while he through diplomacy. Soon another uneasy peace with First Oligarch and Brock finds himself attending his friend wedding. The poison event ([1]) that follows, caused a great uproar in Sirion, and war between Sirion and First Oligarch came. As Eponllyn is driven back to Duchy of Westmoor from Duchy of Perdan(Perdan won the war against Eponllyn), Nivemus helped in the war albeit unsuccessfully as Brock finds the task of having less noble, less army strength a bit of drain. In time though he finds himself a new General, Stratarchos Larkin Venture to assist him. Over time, Perdan threaten Eponllyn small army at Westmoor city and Brock has to order Nivemus army to be station at Westmoor city to prevent Eponllyn realm destruction. As this war come to a close, the war between Sirion and First Oligarch has entered into the longest war period ever. Nivemus will stay on sideline at this time. Now Emperor Malius, turns Legodos Malius Songslayer and Arithagon Gynnjar Plaraveen would prove to be Brock closest advisers in this tough time period. A weak minded Kronogos would give up his Rulership upon seeing half its nobles left its realm, and many vacant lordships unable to be filled up.

Another time period come. Caligus was driven away from Domus city. Though Caligus did destroy his first realm he joined, Fontan, Brock finds himself with less hatred for Caligus as time has broken the hatred. The common enemy is Perdan he recognize. Putting all aside, Nivemus enters into alliance with Caligus, Shadowdale and together with Sirion, Eponllyn, Nivemus attempts to bring about the changes. Greater Xavax, a mighty realm facing all southern realms combined attacks, GX soon fall. Nivemus offers shelter to the GX nobles, and fills up its army ranks with GX nobles. Knowing there can be no peace in the north as long as First Oligarch lives, Brock comes into a most difficult decision ever: To destroy the realm that his old friend Lady Catherine husband founded. After some fighting, the North Alliance has won and First Oligarch is now flying Sirion banner. Soon the North Alliance war with Perdan and South Alliance would resume.

Named for the ancient and now defunct realm of the same name. The capital of Eleador had once been Ashforth.

The lands of the Duchy of Eleador are: Ashforth Oberndorf Obando Salta Dale

Based around the ancient city of Oroya the Duchy was governed by a one time King of Rancagua who had been enthroned in Oroya while the great realm persisted.

The lands of the Duchy of Rancagua: Oroya Caqueta Juazeiro Pedrera Pucallpa

The historic home of the tribesmen of the Omsk and the last bastion of Ora'n worship for many decades, the peninsula was named for the ancient Kingdom of the Omsk that had regned in the area from the city of Kazakh. The Duchy was an aquisition of war with both the Obsidian Islands and Westmoor

The lands of the Duchy of the Omsk Peninsula: Kazakh Kazan Gadlock Bruck