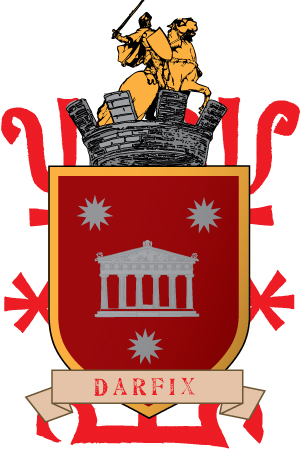 Darfix is the largest city of the continent, often referred to as the Golden City of Dwilight. Such an epithet is well deserved and best earned by the colossal Golden Gates that are the largest entrance way into the grand city. Together with the Golden Gates there are 8 smaller gates in order to increase the accessibility of the city from different sides. Furthermore, the natural wonder of Darfix is one of the most magnificent of sunsets, which creates mesmerizing reflections on the roofs and terraces of the numerous buildings, and thus paints a golden gaze of the heavens across the entire city.

The city is located in the far northwestern reaches of Dwilight, however, the climate is mild and bearable. To the east the region is completely surrounded by the town of rich merchants and traders known as Under Darfix. On the western side of the city there is the vast and endless sea, which makes the Darfese Harbour a special and massive area. Countless galleons, galleys, small fishing boats and other sea-floating devices are circling around it daily, showing off their white sails and daily catches of fish. The harbor was named the Boreal Arakis Memorial Harbor in honor of the first King of Niselur who spent his final moments there adrift in a boat basking in the divine light of the blood stars.

The city is encircled with high walls that are still being repaired on different spots due to the constant monster invasions that have been besieging the city before it was settled by nobility. Defensive towers are built all along the outer wall which itself is surrounded by a moat filled with water. The inner wall consists of two rows of walls both of bricks with defensive towers in between. The whole complex of these fortifications is known as the Trumpet Walls in order to commemorate the fallen ones that bled for the survival and freedom of Darfix throughout the years. When the mighty trumpets sound the ground shakes and the Darfese pride glows.

Being the largest administrative and manufacturing leader of the entire north-west the influence the city has on the entire area is enormous. The Ducal Palace of Darfix, also known as the Golden Throne, is located in the center of the city. It is a place where the Duke's estate is located, but also separated from the administrative offices which are swirling with clerks, courtiers and bureaucrats of the Court. The Ducal palace is often mistaken for the Legendary Silver temple due to its construction of polished grey marble. For this reason the administrative district of Darfix is called the "Silver Temple District". The symbol of the Duchy of Darfix is a black crown, and the duchy itself is often referred to as the Black Crown Duchy.

As a natural and architectural center of beauty and grandeur Darfix is the place that attracts educated people and nobility. As such, the artists, architects, poets, writers, merchants and alike have established numerous academies and guilds in order to study and educate their crafts and enrich the culture of the city. The most familiar construction that preserves the written gems of history is the Great Library of Darfix. The historians of the north-western Dwilight see that library as the mecca of knowledge and history of this land.

The Gardens of Darfix is a place to relax, and a place where the nobility spreads gossip and jealous stories. The appeal of the Gardens of Darfix lies with the human desire to return to the simple and exquisite life in the earthly paradise. The myth of an original Garden with perfumed trees and luscious fruits, birds and animal life, and rivers of life giving waters is common to many pagan myths. This mystical and peaceful paradise holds a fascination for the people of all ages and cultures, and which helps to understand the allure of the wonder of the world, the Gardens of Darfix.

Sanguis Astroism is the only religion that is permitted for the public practice in Darfix. The Temple of the Bloodstars has been constructed by the Niselurian colonists who were the first to liberate the city from anarchy and decay. The Temple itself is a replica of the Libidizeddian Temple, and is thus constructed as the most temples of Sanguis Astroism, with three tall towers. Each tower is dedicated to the following of one of the three Bloodstars. Darfix is also the closest of all other places to the Bloodstars, which makes their influence burst and engulf the population, proving that the Temple of Darfix is a very special holy site.

Legend of the Silver Temple is definitely the most famous myth associated with Darfix. The first colonists who managed to take the city and have later founded Niselur, were driven on their quest by these legends. The Silver Temple is supposedly hidden here, and it is a Temple of enormous power which gives clear vision and grace to the ones who are aware of that power, and the ones who wield that power. However, to this day it is unfamiliar if the Temple really exists. It is rumoured that the gatekeepers of Darfix, the lineage of Dukes, do know the truth, but alas, they are unwilling to share it with the common folk.

There are many tales and accounts of the Golden City during the years before it was colonized.