Difference between revisions of "Lux Nova" 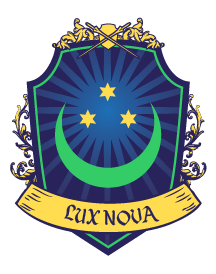 On July 04 2019, Duke Alacrix Galar, Duke of Amen Midgard, seceded peacefully from Obia'Syela. The plan for Lux Nova's founding was originally conceived by Rania JeVondair and Jessica Gildre as they sought the establishment of a more secular realm in the southern most reaches of Beluaterra.

Special medals are created and issued for the prowess of the warriors of the Legion of Lux Nova. Medals can be nominated by anyone within the realm, and are approved and presented by the Decurion (an excellent opportunity to RP a ceremony...). The medals are to be displayed as a prefix to the noble's unit name, and carries with it the glory of the honor.

The following are the honors of Lux Nova:

(÷) :Insigne Sacrificium, the Badge of Sacrifice. Given posthumously to those who die in battle, may also be given to those who suffer lengthy periods of imprisonment or convalescence.

(×) : Crucem Custos, the Watchman's Cross - given for participating in a significant defensive siege.

(+) : Crucem Milite, the Knight's Cross - given for participating in a significant battle on an open field.

(%) : Ferrum Argentum: the Silver Blade - given to an infantry or cavalry commander who helped turn the tide of a battle.

(>) : Sagitta Argentum, the Silver Arrow - given to an archer commander who helped turn the tide of a battle.

In addition to these military honors, the Pontifex reserves the right to bestow the following honor:

(*) : Stella Gloriae, the Star of Glory - the highest military honour, can only be given by the Pontifix