Welcome, knight! We are very glad to have you with us, joining the only Light that has banished the filth and darkness of monsters undead, and worth from southern Beluaterra! We are sure that you have many questions, and this hefty tome here was put together in the hopes of providing some assistance in that regard as you join the life of Obian High Society!

The Mute Herald is the newspaper of the Sacred Realm and focuses on internal affairs.

Influence in the Sacred Realm is divided between the three core factions of Obian high society: The Heralds, The Templars, and The Inquisition. The Heralds, composed of the priests of the Sacred Order, form the pinnacle of this triad of power. The Templars are the Holy Warriors of the Sacred Realm, dedicated to the expansion and protection of the Faith. The Inquisition are the hunters and purifiers of heresy in all its forms, dedicated to the inhibition and prevention of renewed daimonic invasion. With the Heralds at the top of this Triumvirate, the Templars and Inquisition form the opposing legs. Influence between these two factions are measured by how many of their members serve the Sacred Realm as Heralds themselves.

The Obian society established by Grandmistress Rania was a strict and stratified one. Each member of the Grand Council have and execute their specific responsibilities, but it falls to the dukes of the realm, as the most senior and influential nobles, to lead High Society vis a vis The Sacred Court. This is the official name of the royal court of Sacred Obia'Syela where Heralds, Templars, and Inquisitors of every rank vie for ducal favor. While only members of the faith may become lords as the Oracle's Law states, presently only the dukes and duchesses of the Sacred Court have the power and jurisdiction to appoint provincial lords. As such, since dukes and duchesses must be members of the faith, it goes without saying that where flows the whims of the realms these highest noble elites, so too flows the realm. 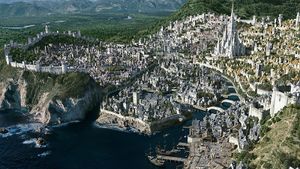 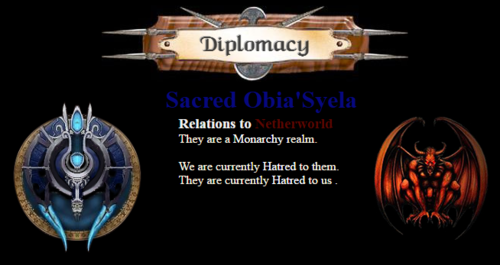 While I force no one to worship the Veiled Goddess, do not mistake that for the ability to practice a different religion anywhere outside of your own estate. If you hold different faith, you keep it to yourself. And if anyone is found to worship in heretical religion, you better believe I will be standing directly beside the Grand Inquisitor when we purge them from the realm.

Official Documentation of the Offices of the Grand Inquisitor

Treason during times of Conflict/War

Originally, the Oracle sponsored a single force, the Enlightenment, to spread Obeah's word to all the corners of the South. Over the years, however, this army traditionally became large and proved too difficult to manage effectively. The Oracle became displeased with their lack of progress and the many setbacks suffered from the increased, post-invasion levels of undead and monsters roaming the wild. And so the Enlightenment would be split in two...

It's just that Obia'Syela is so active that it makes for a perfect realm to showcase the new tutorial.

I am almost back at my old level of activity in this game, I blame you!

I work two jobs in real life and am a full-time college student with a 4.0 GPA that I'm constantly battling to maintain, so I don't have a ton of free time, but the little bit of free time I get I spend on Battlemaster. If I don't have time, I make time, because Obia'Syela (not to get all mushy here) is probably one of the funnest, realest gaming atmospheres I've found in a long time. It is genuinely important to me.

There will still be a boatload of entertaining experience for you in Obia'Syela though, I'm certain of it. Almost every player/character there plans something, has some goals, plays some angles and many of those plans/goals/angles include other players/characters. The ratio of those who create/contribute to flow of events to those who drift with the flow of events is exceptionally high here, higher than any other realm I've seen.[...]Obia'Syela is very fun for someone who likes RP-oriented way of playing battlemaster. RP-wise it's probably the best realm I've been to.

I cannot overstate the great community of players in Obia'Syela. In combination with the depth of lore, I have found that Obia'Syela is the best realm in Battlemaster to RP along with the constant new lines of intrigue all packaged in a fantastic religious themed realm.

If you picked up the hidden clues scattered throughout THE FOUNDING Roleplay, you'll understand. Those who don't should find someone who does and hope for the best. ;-)