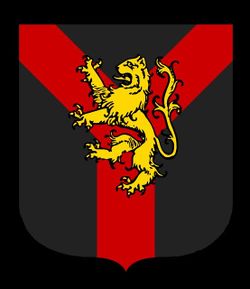 There is no point to playing this game without having outrageous, crazy ambitions.

The JeVondair family's roots began in the Desert of Silhouettes, an arid province in eastern Dwilight inhabited by sandborn clans and long-disputed between the island realm of D'Hara and the mainland empire of Luria Nova. It was during a period of D'Haran expansion that Rynn JeVondair was first knighted as a representative of the sandborn peoples: a dark-haired, dusky-skinned race of tribes distinguished by their tawny features and the elaborate braids they wore that denoted clan, rank, and even accomplishments. The family's original colors were red and black representing Blood and Duty. The three red spokes of the family crest represent the three main familial branches: The main line that are direct descendants of Rynn JeVondair and his immediate family, The Eastersands, a related sandborn tribe that Rynn elevated, and the Selenian branch which is perhaps the most famous of them all. The rampant lion was adopted by the JeVondairs for their crest as it embodies core values that the JeVondairs enshrine. It's gold coloring is a symbol of royalty. Writ in gold beneath the crest read the JeVondair Family motto: Hic sunt leones, meaning "Here are Lions" in common.

Regardless of their differences, members of this family have served in every capacity of government and leadership. The JeVondairs have ruled nations on four continents including the Dragon Kingdom of D'Hara, the Empire of the Ivory Vales, the Imperium of Greater Xavax, Sacred Obia'Syela, and the Sovereignty of Halcyon; having served founding roles in the last three. They have founded guilds to include the Great House JeRavosi, the The Templars and The Inquisition, and even a religion - The Heralds of Obeah. They have been victorious in many duels, often killing their opponents. They have conquered, commanded armies, slain daimons, and challenged the status quo. On rare occasion, they've been known to walk in the land of the dead and return.

A JeVondair with a cause tends to bring tectonic change in their wakes.

Listed in Order of Creation

A Game of Thrones...

Only JeVondair nobles are permitted to proclaim Allies, Favored, and Enemies of the the JeVondair family. All JeVondairs are beholden to these as absolutes without exception.

Hahaha I LOVE the difference between your two enemies. One of them caused a realm shifting betrayal of the highest order, the other stole 150 gold from you.

Really does reinforce a mantra I live by in this game:

– Player of the Gildre Family 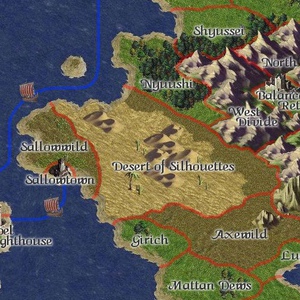 Home of the Sandborn

JeVondairs are pretty much like some sort of tectonic plaque. You KNOW they're there, you KNOW they're always moving and you always keep forgetting about them due to the glacial speed of their plans. That's when they pop a volcano in your garden and cover your lawn in ashes and lava.

I feel like I have witnessed you bend this game with your mind, Jev. Or maybe it is me that bends, like the spoon scene in The Matrix...

Death only annoys members of the JeVondair family