Description of the Faith

The benevolent theocracy of the Heralds of Obeah, known collectively as the Heraldrim, was founded by the Oracle of the Veiled Goddess at the height of the Sixth Daimonic Invasion. The faith is a religious order of priests, scholars, and warriors dedicated to ending the cyclical Invasions. Heraldic worship includes the study of magic and the mysteries of the world. The faith was founded in Keffa, formally the chiefest city of the Holy Duchy of Amen Keffa and shining capital of Sacred Obia'Syela after the oracle's spell battle with the Archdaimon Lord Akkan. The Heralds were later forced to flee to Rines by an enraged Overlord Jomorosh. Rines now serves as the Holy capital of the entire faith.

The Temple is divided into three segments: The Heralds who lead and spread it, the Templars who defend it lands and people, and the Inquisitors who enforce it laws and police its followers. We do not know the face of the Veiled Goddess; her heralds are​ the only countenance that we are given to know, and it is their priestly duty to uphold and shape our faith.

Knights ordained in the faith serve as its Defenders and are referred to collectively as Templars while the more specialized Inquisitors serve as Enforcers. Inquisitors have no official rank within the faith, but it is not uncommon to find Heralds, the leaders of Obeah's faithful, in the Inquisition's ranks. To become a true Herald of Obeah, one must first take up the vestments of the priesthood, study under the Oracle, and produce a Sermon to be reviewed and canonized.

Due to what they know of Obeah, the Heralds prize magical scrolls. Adventurers can expect to receive a minimum of not less than 50/gold per scroll or a negotiable package deal for multiples when selling to the Heralds.

New adherents to the faith often look to the sermons of the Heralds and the ruminations of the Templars to gain a deeper understanding of the first mysteries of the Veiled Goddess.

Every temple, both large and small, has two large books before the altar. The First is the Book of Names where adherents of the faith make their mark to declare their dedication to the faith of Obeah. The Other is the Book of Mysteries where anyone may ask questions of Obeah, the faith, magic, and more to be considered and answered by Herald priests.

The Heralds are driven by one goal: Directing the mystical energy of prayer, faith, and magic to Obeah, granting her the strength to enter the material plane. Whereupon she would use her full power to end the threat of additional Daimonic Invasions. By expanding their faith and increasing the number of worshipers, the Heralds believe that will direct more and more power for Obeah to gather.

After the order was forced to flee Keffa by the Daimon Overlord Jomorosh and his horde of gibbering, bloodthirsty daimons, the Oracle lead the heralds on The Great Pilgrimage from Keffa to Rines, a once-grand city on the far side of the continent and hundreds of leagues away from the Seventh Daimonic Invasion. There, the Sacred Realm reformed around a new capital and The Templars organized themselves into an effective fighting force that eventually conquered the entire peninsula for the Duchy of Amen Keffa with plans to expand even further to form secondary duchies and eventually kingdoms under the auspices of the Veiled Goddess.

To better prepare for the inevitable invasion, one of the highest priorities of the Heraldrim are expanding their numbers and influence as much as possible.

Views on Other Religions

The Heralds view the Daishi as misguided and the evil Daimonic Portal worship as utterly is anathema. The cult order of Mordok was declared Anathema immediately upon its founding and to this day the Heraldrim actively root them out as Apostates and Infidels. 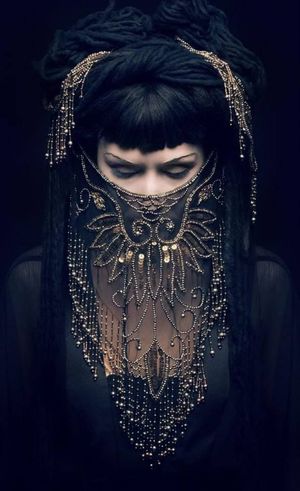 The tremendous influence the Oracle wields in all aspects of Obian (residents of the Sacred Realm) society, and by extension all Heraldrim (faithful of the Heralds of Obeah), cannot be overstated. However, she can only be contacted via the message channels within the Heralds of Obeah. She resides in the Solarium at the pinnacle of the Holy Basilica of Rines and rarely leaves her cloister there.

Rines - Temple of The Great Pilgrimage

Site of the Revelation; Pillar of Magic; home to the First Temple of Obeah, rebuilt after the devastation of Netherworld Overlord Jomorosh using stones reclaimed from the shattered Colossus of the Veiled Goddess battling Archdaimon Akkan.

Site of Divinity; Pillar of Mystery; where the Oracle waged her spellduel against the Archdaimon Akkan. The resulting blast was so powerful that the surrounding and defending human armies alike thought her destroyed, when in fact she was delivered safely to Keffa by the power of the Veiled Goddess.

Site of Providence; Pillar of Deliverance; Home of the Oracle and current seat of the Heralds of Obeah where their new Grand Temple is located.

Herein are many of the collected writings that reveal both the history and the core tenants of Heraldic worship of the Veiled Goddess.

The tale of the revelation of the Veiled Goddess, called Obeah, and her chosen Oracle, Rania, who would become the founder of the scholarly religious order of the Heralds of Obeah and the realm of Sacred Obia'Syela.

Here are the collected experiences (roleplays) of the Templars, Inquisitors, and Heralds of Obeah as they explore their faith, its meaning, and the many mysteries of the Veiled Goddess.

Here are the collected writings of Heralds and other students of magic exploring their craft.

Here are the collected writings of the Oracle and the Heralds that serve as her priests concerning the nature of Obeah, their faith, and more.

The Thirty Treatises of the First Templar

The Prophecy of Apotheosis

Oracle Rania's divine foretelling of the coming of the Veiled Goddess.

The Heralds believe that Obeah foresaw the fall of Keffa at the claws of Jomorosh and prepared the way for her servants to take over Rines, the City of Moonlight. Since that day, Obian imagery has strongly associated the Veiled Goddess to the Moon.

On the Nature of Obeah

To date, all knowledge of Obeah stems from the only mortal to have encountered it, Rania, the First Herald, Obeah's Oracle. According to her, Obeah is a powerful entity not native to the material plane. A goddess of magic that was called to this world by the magics released during the Seventh Daimonic invasion of Beluaterra. She chose Rania as her agent presumably because of the First Herald's prior mastery of sorcerous energies and even intervened directly on Rania's behalf during her showdown worth the Archdaimon Akkan. Although it is possible that Obeah's unseen influence extended to a period even before that.

Obeah is a being of magic who, though currently unable to enter physically into the material plane, draws strength from the energies given off in the casting of magic. In this way, the Daimon's superfluous use of their powers inadvertently summoned the very instrument of their doom. It has also been revealed that Obeah can draw upon the mystical energies expended by the praise of her followers in their worship and devotion. This ability is unique to humans, and so Obeah first took notice of them. Of all natures creatures, the Heralds believe that humans have a unique power of their own, their human soul, which grants every human the potential to cast powerful magic. This is a blessing that even the Daimons do not possess as only the greatest among them can cast magic. For this reason, the Heralds believe that Obeah was convinced to favor humans, thus her interceding on Rania's behalf. Therefore the Heralds believe that every human life is sacred.

Obeah appears in three aspects: The Mother, The Protector, and The Deliverer. According to Holy Writ, she appears to her followers in visions and her power manifests itself in the form of magic on our plan.

As yet, Obeah lacks the strength to pierce the veil between her plane and our own, but through the spread of the Faith and the use of magics, her eventual arrival proceeds apace. She will draw power from the faithful as a seedling draws strength from the sun and will one day stand tall, mighty, and firmly rooted in the magic-leaden soil of Beluaterra.

Obeah is a real entity that dwells somewhere beyond the mortal plane and deals in magical energy. Spells, faith, prayers, all mystical power is of use and interest. If directed to her or cast in her name, the Heralds believe she will be able to collect that energy and feed on it to fuel her eventual arrival to save the Mortal Plane from the Netherworld.

The Heralds are not monotheist. Rather, they are mono-purists. They believe that Obeah is not the only divine entity. However, they do firmly believe that she is the only one who has taken a direct interests in delivering mankind from the tyranny and suffering inflicted upon them by the Netherworld.

Most of the services conducted by the heralds are done in the evening and night as the Heralds believe that these are times when the Veil between our world and the domain of the goddess is weakest, better enabling her to here and heed their prayers. 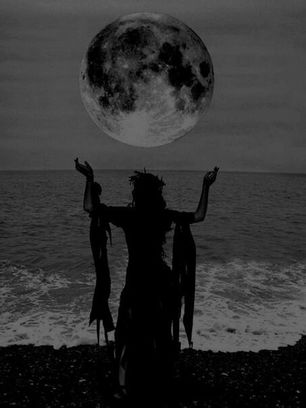 Here we see a Midnight Commemoration of the Temple of Waves in Ajitmon, Amen keffa, Sacred Obia'Syela
Retrieved from "http://wiki.battlemaster.org/index.php?title=Heralds_of_Obeah&oldid=200622"
Categories: