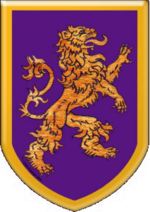 Levon is a member of the House of Boreal. Being a son of Alexanderos, Levon was used to humility and poverty through the majority of his life. However, being a descendant of Boreal the Great the visions and tendencies towards grandeur, glory and conquest have always been a part of Levon that were brewing inside of him like a volcano. In times when members of Arrakis family were few in the white world, his brother Leopold, being the eldest one, was privileged to receive the family support and serve the noble society. While Leopold was fighting for the glory of the doomed rebels of Giask, Levon's life was difficult. Left on his own, he roamed the lands of southeastern Dwilight, often being hired as a pathfinder and ranger for the minor nobility just in order to survive. He was particularly impressed by the deserts east of Sallowtown, which became his mostly frequented region. He adopted much from the ancestral wisdom that could be thought from the seldom found hermits of the deserts. His appearance is therefore highly unusual for the mediterranen Forlandese. He wears something that resembles a turban, and his thin armor is usually covered by clothes and capes which gives the illusion of Levon's vulnerability in battle. His fighting style is unique, too. Accustomed to the dexterity and speed as the only means of survival in the deserts, Levon fights with two slightly curved scimitars, and no shields, therefore dancing the Dance of the Silhouettes; a fighting style rarely seen in feudal Dwilight.

With the defeat of Giask his older brother Leopold fled to Atamara, offering the chance for Levon to finally ascend to a noble place he was born to hold. And he seized that chance. The lands of Luria surpassed Forland and Toprak Minor, and after the civil war was finally over Levon recognized many opportunities and wealth that the mighty Luria held. And so at the age of 17 he set foot in the white world that was widely opening for young Levon.

Upon his arrival to Luria Nova he was welcomed by Duke of Giask, Lord Fulco of D'Este family. Due to the historical bonds between D'Este family and Arrakis family , Levon was nurtured into the Lurian society rather well which helped his stellar advancement in the hierarchy. He took up a knighthood in Irvington for a short time, after which he was made a Marshal of the Lurian Vanguard and a Marquis of Shinnen Purlieus. Levon also participated in the rebellion against King Amaury as a right hand of Duke Fulco's re-ascension to the Nova-Lurian throne. For this, he was awarded the honor to become the High Commander of Luria Nova, and the ability to one day become the great Imperator of all of Lurian Kingdoms. Still, the amazing ambition and dauntlessness of Levon's personality was further revealed when he himself ran for the Crown after King Fulco stepped down. He lost to his opponent, though, as the new King of Luria Nova, King Rickhart Haerthorne, had beaten him by 8 votes.