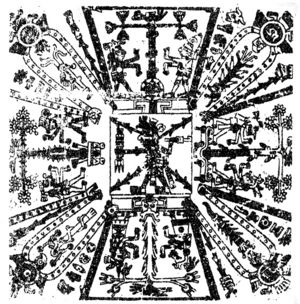 Image depicting the components of the world.

The time before the creation of our branch of humanity.

The supposed era that consists of the time between the creation of this world and the rule of the human subjects on the living world following the killing of the Great Dragon mother by the human/undead alliance. Knowledge of these times are mostly passed on by oral tradition, traces being found in many pagan rites around the world, notably on Beluaterra. Written records seem almost non-existent, though rumours exist of a slab our two of tremendous importance.

This is the era in which the ancestors of the Cult, before they were called so, ruled the lands and applied a sort of theocratic republic system, on which the later feudal system would heavily inspire itself on while omitting the duties to the gods. It was a time of great prosperity, in which the gods were said to frequently manifest themselves for mundane affairs. This era is believed to have started with the beheading of the Great Dragon, but little is known to this time about what caused the collapse.

At some point in time, the gods simply ceased to manifest their will on this world and to guide their priests. The clergy attempted to hide this silence, but after series of failures and great disasters, it became clear to everyone that the church had lost its way. The Hueyi Tlatoani of the time is then believed to have declared himself a descendant of the gods (which one[s] is not known at this time) and established his rule of self, breaking with the tradition of rule from above that had reigned to that day. Quickly, many of the lesser rulers followed suite, these quauhtlatoanime either declaring independence of their own, banding with some of their peers, or swearing fealty to a greater power for protection. To protect their new rule, they began massive witch hunts to wipe out the remaining clergy and are said to have buried all the texts they could find in vaults deep underground, remaining superstitious despite the circumstances of this new age. Quickly, realms were formed and destroyed, the tlatoanime adopting the term of "king" in modern times and those who claimed descent or power of the Hueyi Tlatoani came to be called emperors. With the religious structure destroyed, only two institutions remained: family and the military, which became more and more tied with time, binding certain families to a certain type of work and others to war. Over time, groups and individuals attempted to somehow fill the void that had been left with the absence of religion, though they have mostly failed, being unable to enter in real contact with the gods and becoming subject to their rulers. While many still live in this as in this era, this era is considered to be over.

Some time in 1007 the gods started sending visions to Louis-Joseph Chénier, a noble of some importance in a realm of little importance. At first he had only this single one for a very long time, and thought it but a dream, but later they came back and became more recurrent. Though the earlier ones were contradicting at points and hard to make out, they became clearer and clearer with time. When the first human sacrifice was done, it is said that it suddenly became all clear to him, that the gods had chosen a new Teocoatl to push forward their worship and reconstitute the clergy and tlahtocayotl of old. Though most realms still live in the dark ages, an era of prosperity is announced and expected to come.