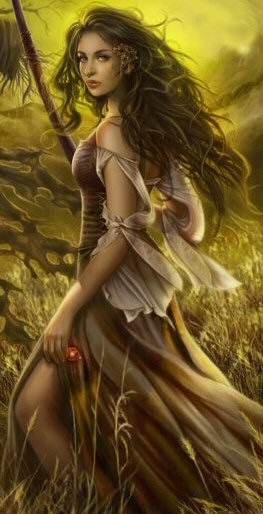 Deianarah is the youngest member of the family. She shares her coloring with her older brother Alec, and some of his playful personality. She also has some of her eldest sister, Sorsha's, traits, she is honest and believes there is good in everyone.

She started her career in Sirion, she did not stay long and soon after left in search of her brother Alec. She found him in Enweil, Buelaterra. Soon after finding him, he was swallowed by the Netherworld and never heard of again. Dealing with the strange disappearance of her brother, she decided to leave and move on in Arcaea, in the Far East Islands, hoping to find a place for herself.

Upon arriving she met with Sir Thain, whom she decided to follow in his quest to regain his family's realm.

Afterwards Deianarah did what was asked of her, she led her men to battle, she didn't really mingle with the nobility seeing as she was still trying to grow accustomed, but she did meet with Thain a couple more times afterwards.

The battles waged on, one of note would be a battle in Taop to which afterwards, Thain invites Deianarah to a party. Seeing as the nobles were in an enemy region at the time, many insults were thrown back and forth, and Thain got a challenge to the death by Endvorque Paulandron. Receiving the news, Dei didn't know how to react. She had gotten close to Thain, she wasn't sure how she felt, but she knew she didn't want to lose him. He tried to consol her saying nothing would happen but she wasn't sure of it all.

The duel took place, and he did get seriously wounded, but to her joy he survived. She didn't know what else to do, so she stayed with Thain until he regained consciousness. Soon after Deiararah and Thain both returned to battle, only this time it was she who suffered a bit of an injury. Seeking to make sure Thain was well, she managed to make it to his tent but only to collapse. Thain then took care of her and soon after both nobles met a mysterious and strange noble by the name of Silmeriel Orgauth.

This strange but delightful woman would soon change their lives by her mysterious ways and take them both on an adventure they would not forget.

After their adventure had been dealt with, life as she knew it returned to normal. It wasn't long though, the vision Deianarah saw of herself and Thain was realized.

Knowing how she felt about Thain, she wondered exactly where they stood with one another. It wasn't until they met again at the Tournament held in Nocaneb, Thain came across the Loveberry she brought back from the fey world, and it was then she found out just how much he felt for her.

Shortly after, during one of the many campaigns of battles between Arcaea and Soliferum, Deianarah was wounded in battle. Being away from the battle at the time, Thain hearing of the news rushed to Azros with his men to find her.

After some time had passed and time neared to start the colony, Silmeriel visited Deianarah with words of apology and an oath.

With the assistance of Arcaea, and other allies, as King Jenred promised, Thain was finally able to take Azros and found his new realm, C'thonia, which he ruled as King. Shorly after he then appointed Deianarah as the Duchess of Azros, and Imperial Inquisitor of C'thonia.

A tender Moment shared between Thain and Dei.

Deianarah finds out Thain issued another challenge to the death. She's not happy with this and they exchange words and he promises to be more careful.

Out of nowhere, Alec then lands into C'thonia without a memory as to where he came from and how he got there. Thain, having heard of his reputation, takes him back to the palace where he is questioned.

Amidsts the commotion, Thain makes a grand announcement before the nobles of the realm and proposes to Deianarah who happily and lovingly accepts.

With further investigation of Alec and Isabel, King Thain decides to let them free but keeps a watchful guard on each in case they try anything. Deianarah is overjoyed to having her brother back.

Shortly after dealing with a battle, Thain returns to the palace to find Dei who has prepared a day filled with gifts to honor his birthday, filled with an announcement of her own.

After Thain leaves Deianarah that night, he makes it to Priest Galen's home only to find out by letter from Conan himself that Galen is consorting with him. At first Thain rages with anger and demands from Deianarah that she bans him. Deianarah feeling that Thain's anger and pride is getting the best of him, tries to calm him. It takes time, but she eventually comforts him and he agrees to give Galen another chance. Although the betrayal he feels in his heart is not that easily overcome.

Matters within the realm begin to get heated when Galen and several of the realm members begin to get into verbal battles. Galen then decides to have no part in the war due to his beliefs that the Order of The Elders should have no involvment whatsoever. It is during this time Lady Cassidy and Deianarah meet for the first time and they form a quick friendship despite the fact her entourage consists of the priest in question and that Cass in love with his brother.

In a rare moment in her life, Deianarah is faced with betrayal of her own. Having always known her servant Alexandra had an interest in Thain she had still kept her under her employ until one afternoon she walked into a situation that gave her fear life.

After dealing with her servant Alexandra, Deianarah made a small business trip to join the guild of the Hawk & Phoenix and on her way home she is stopped by the urgent news that Azros is under attack by Soliferum. Only a short while before this occured, Deianarah and Priest Galen had a verbal explosion. It seemed Dame Denna one of her knights had been rudely reprimanded for being in the region of Arrmol by Deianarah's personal request that she do courtier work in the region. This eplosion of words led to an argument over who was in the region of Arrmol at the time. Deianarah ended up fining the Priest in the end, but was wary of the Priest from then on because she knew he was up to something. It was during this attack on Azros that she discovered Galen had changed Arrmol's allegiance to Soliferum in hopes of saving his beloved temples but was betrayed as well. Thain had been right all along.

After reuniting with Thain and making sure he was well, together they returned to defend Azros from Soliferum. It was a long and fierce battle with many wounded on each side. In the first battle the King is injured, in the second Deianarah replaces him.

Deianarah recovered from her wounds in the battle, but more and more she began to experience headaches that soon started to cripple her. Also, she is devastated by Galen's treachery and feels responsible for allowing it to happen. In a moment of weakness she admits to Thain how useless and responsible she feels but he comforts her.

Time passed and what excitement there was over Galen and his followers eventually died down. While out and about in the city Deianarah comes across Sir Malificar Jeckyl, the King's second in command and finds out a member of his family a great hero was killed fighting daemons in D'Hara and Dei can't help but fear for her sister, Sorsha.

Shortly after speaking with her, Thain secretly informs Deianarah he has urgent matters to take care of and that he needs to leave. He doesn't tell her the nature of the emergency, only that he needs to go immediately and he may not find a scribe to contact her but to trust him. His hopes was that he would be able to contact her but it doesn't turn out that way. In his absense, Deianarah tries to stay strong but soon she starts feeling the emptiness as does the rest of C'thonia. Nihilus then speaks with her of a possible threat, and during this time something occurs with the populace and since Thain hasn't been seen they demand a new figure to put in his place. Deianarah then meets with Alpha divulges the nature of his absense and informs him Thain would wish for him to take his place as Steward but it is Nihilus who gets voted instead.

Shortly after Nihilus is made Steward, Deianarah then receives the news of Thain's return and she is absolutely overjoyed.

One who felt the Kíng's absense was Sir Malificar, thinking the king wasn't returning he decided to go to D'Hara to honor his uncle and finish what he started. With the King's second now gone, Thain appointed Sir Raphael Ironsides as his First Captain.